You remember cmdr hayes, don't you? 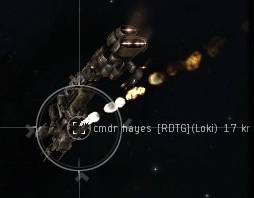 Yes, that would be him--the fellow in the burning Loki who lost a 1v1 duel with a New Order Agent. 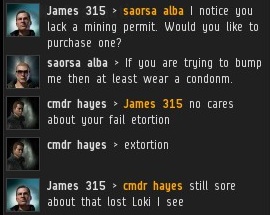 The last time I had seen him, he was swearing revenge against me. When he reappeared, the revenge consisted of Miner Bingo squares. 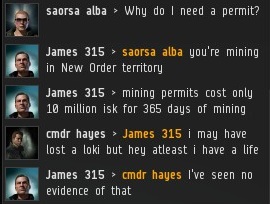 Though I attempt to present my highsec conversations as crisply as possible, the truth is that there's usually a lot of cross-talk. Like a chessmaster playing multiple opponents, speak with several different rebels simultaneously. 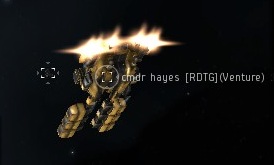 I was having a nice chat with one Code-violator when hayes decided to inject himself into it. He unleashed his latest revenge plot: A counter-bumping Venture. This lasted a few minutes before hayes gave up. 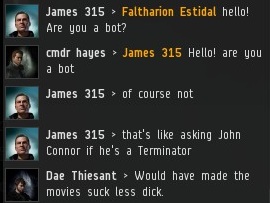 Some rebels will attempt counter-bumping for hours at a time. Before hayes packed his Venture away, he tried copying me, to learn the source of my great power. That's what the rebels don't get: It's not the ships, modules, skillpoints, or catchphrases that makes a hero. It's the man. 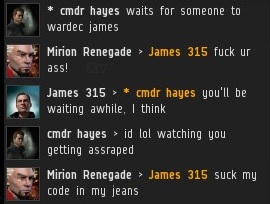 hayes may have given up counter-bumping, but he didn't give up his dreams of vengeance. In a cross-over with Mirion Renegade, hayes contemplated the outcome of an anti-Order wardec. You might laugh at someone whose plan is to "wait for someone to wardec" me, but it's actually a very common plan. 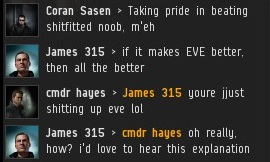 When no wardecs were forthcoming, hayes switched tactics yet again. This time, he attempted to undermine the legitimacy of the New Order. 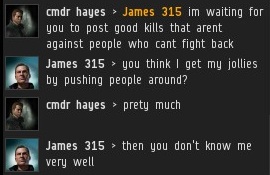 hayes misjudged me. As the moral authority of highsec, criticisms aimed at my honour and/or invocations of the word "bully" have no effect. Questioning my honour is like telling water it's not wet enough. 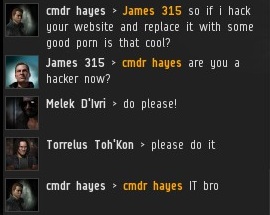 Then hayes unleashed his ultimate master plan: To hack MinerBumping. Until now, he had held his cards close to the chest. No one had even suspected he was an "IT bro". 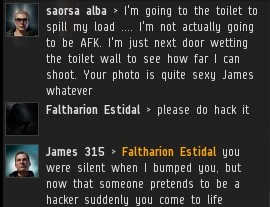 The system perked up as the rebels gained a new hope. What could be more powerful than someone who works in an IT department? All eyes were on hayes. Would he succeed in hacking MinerBumping, or would he immediately discard this plan and continue rifling through his sock drawer of revenge plots?

To be continued...
Posted by MinerBumping at 22:35