Rage of the Russian Renegade, Part 3

Previously, on MinerBumping... I was involved in an altercation with Mirion Renegade, a rebel miner from Russia. I spoke my truth to him, but somehow my truth managed to make him more angry, not less.

After Mirion sounded the alarm in local, other Russians in Osmon system were aroused to action.

Eisen Thellere > To all the Russians in local, can you help someone? James 315 is bumping to the thread away. 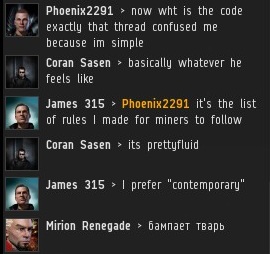 ...And by "action", I mean they watched me bump Mirion out of the asteroid belts. 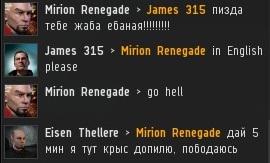 On occasion, Mirion slipped back into his native tongue, but I was always able to pull him back. 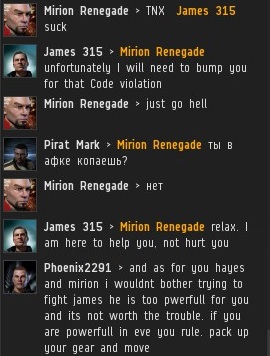 Another Russian, Pirat Mark, asked Mirion if he had been "digging AFK". Mirion flatly denied it. His denial is good evidence that he knew it was wrong to AFK mine in highsec. 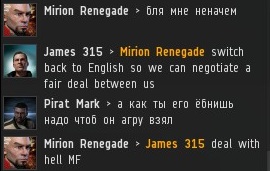 Mirion renewed his insults, while Pirat wondered aloud how I was able to attack Mirion without "taking aggro". 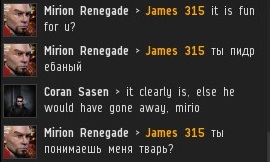 By this point, it was clear that we were getting nowhere.

Mirion Renegade > You understand me, bitch? 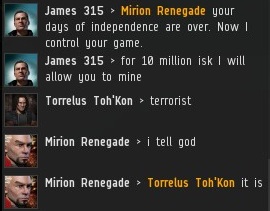 I'm not in the habit of sugarcoating things. Most people respect me for being honest with them, but Mirion wasn't most people. Perhaps he would have responded better to a kinder, gentler approach. 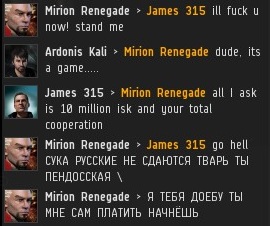 I knew I was on the wrong track when Mirion broke out the Cyrillic all-caps, something Russian miners rarely do. 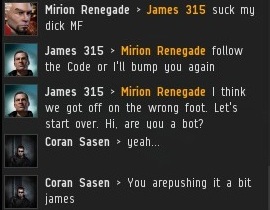 It was time to hit the "reset button" on our relationship. Given the level of animosity between us, you might think this would be difficult. Actually, starting over merely requires one to say "let's start over" or "let's hit the reset button".

...Unless, of course, you're dealing with someone intent on being unreasonable. I still can't believe that didn't work. 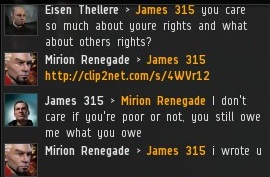 Mirion linked a screencap he uploaded. At first, I thought he was linking the screenshot from earlier, where he showed that he only had 3.6 million isk in his wallet. The fact that I was willing to devote so much time to someone with so little isk was just another classic example of how un-cult-like the New Order is. 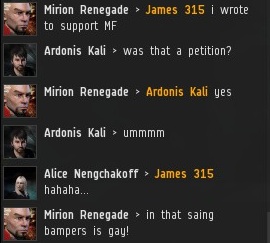 But Mirion had actually uploaded a new screenshot--a screenshot of him filing a petition against me. On rare occasions we've seen copies of GM responses to petitioners, but to actually see the text of a miner's petition is a precious thing indeed. Mirion had been disrespectful to me in local all day long, but now I would see how he addressed CCP.

To be continued...
Posted by MinerBumping at 23:04