Do you remember Spark2Universe? He was a Code violator who engaged in a lengthy conversation with Agent Selina Dyle by EVEmail after his Hulk was destroyed. Just prior to my post about him, Spark sent Selina one last parting shot:

Spark's views on the EULA are fascinating. Shooting spaceships in highsec is possible, but it's a violation of the EULA. Combat is an "exploit".

Spark also has an interesting view on real-world morality: Shooting Hulks in highsec is worse than actual terrorism, because at least terrorists don't ask for 10 million isk.

If the Nazis do have a Code, it probably doesn't compare to the New Halaima Code of Conduct. Did the Nazis illustrate their system of laws with examples from Goofus and Gallant? No, I didn't think so.

Perhaps the most disturbing thing that Spark2Universe said in his EVEmail is that he acts the exact same way in real life as he does in EVE.

MinerBumping posts deliver highsec miners from obscurity into infamy. After the post about Spark went live, someone told him about it. He took the opportunity to respond to my remarks.

It seemed as though the bounty placed on Spark really rankled him. You would be surprised how many carebears are offended when they get a "WANTED" sign plastered across their portrait.

In the original series of EVEmails, Spark had revealed that his real name was Rafael, and Agent Selina Dyle replied that her own real name was Sarah Palin. Apparently Spark didn't buy it. 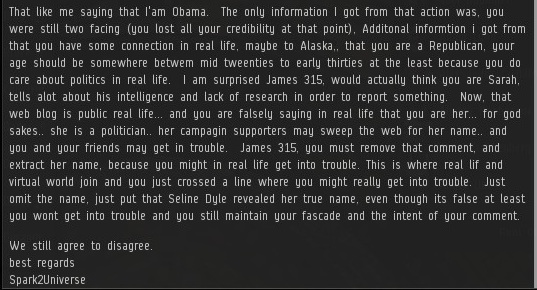 Flexing his incipient space lawyer muscles, Spark recommended that I clarify that Selina Dyle is not, in fact, Sarah Palin. First of all, surely more than one person is named Sarah Palin, so claiming to have that name doesn't mean someone is impersonating the former governor of Alaska. Secondly, I have no way of knowing whether Selina's real name actually is Sarah Palin, or even whether Selina is indeed the former governor of Alaska. I can only report that Selina Dyle signed an EVEmail as "Sarah Palin", and I respect that. 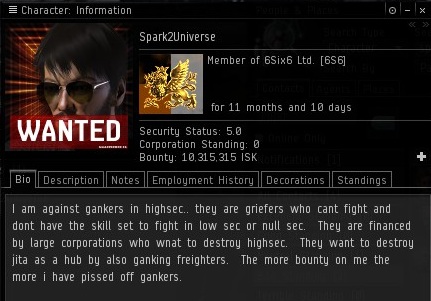 One thing that makes me very proud of the New Order is that we always leave miners better than we found them. Spark2Universe still has a long way to go, but I am confident that significant progress has been made.
Posted by MinerBumping at 17:57