Every once in a very long while, an eagle-eyed miner will read the Code carefully enough to discover an obscure provision that allows them mining rights for 24 hours if they are able to answer my Questions Three. The Questions Three are also one of the options for gaining the right to engage me in a 1v1 duel, but they have been invoked only once before for mining rights. I think most miners would prefer to either pay the 10 million isk for 365 days of mining, or dig in their heels and join the resistance. 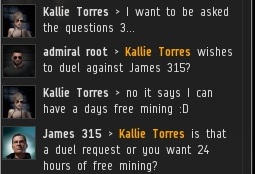 That's why I was surprised when ice miner Kallie Torres expressed an interest in the Questions Three. It came out of the blue. 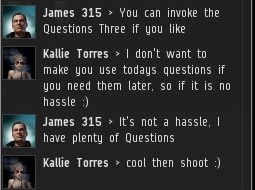 First I needed to confirm that she was indeed asking for a chance to win a 24-hour mining pass, as opposed to dueling me. 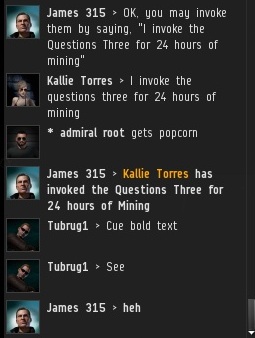 And just like that, it was on. The lights in Tolle dimmed, and dramatic ambient music played in the background. 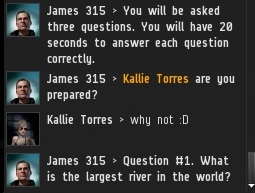 The first Question potentially spelled disaster for Kallie. On no less than three separate occasions, this question had been asked before. Each time it was answered incorrectly. 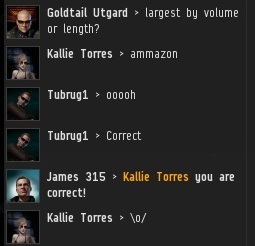 The fourth time was the charm. Kallie broke the curse of the Amazon! She misspelled the river's name, but it was close enough to count.

When it comes to the 20-second time limit, the timestamp on my chat log is determinative. Kallie managed to barely eke it out. Some would say 20 seconds is just long enough for someone to google an answer, depending on how well the question (and its wording) lends itself to googling. I think the time limit is probably just enough to ward off googling in most cases.

Whether or not Kallie googled for the answer, I cannot say. In any event, she became the first to advance to the second of the Questions. The difficulty level increases dramatically at this point. 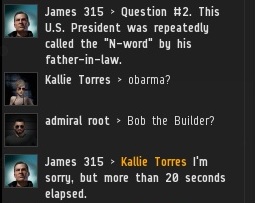 The question was particularly challenging for Kallie, whom I assume is not American. According to my chat log's timestamp, she took a little too long to respond. 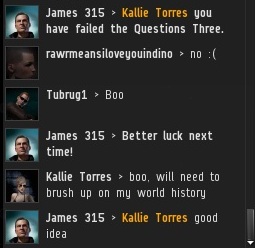 After such a promising start, it was an anti-climactic finish. No one wants to lose on time.

Unlike most others who invoke the Questions Three, Kallie showed grace in spite of her disappointment. 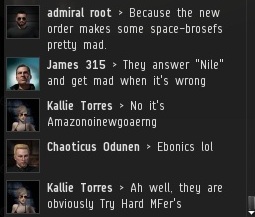 She was surprised to learn that her predecessors were poor sports. 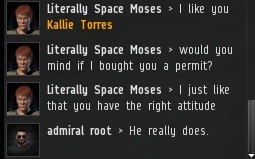 Kallie's positive attitude earned her the respect of Tolle.

It's the feel-good story of the latter half of the week! Like a Shakespearean comedy with a happy ending, Kallie won the right to mine for 365 days. The New Order and its system of just laws gained much prestige that day.
Posted by MinerBumping at 00:52

Email ThisBlogThis!Share to TwitterShare to FacebookShare to Pinterest
Labels: Payment, The Code, Victory