Erotica 1 has made quite a name for herself. Over the last year, she became Jita's most celebrated isk-doubler and the New Order's biggest shareholder. Then she went into retirement. 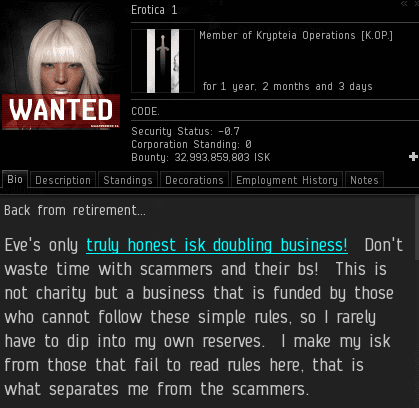 ...and then she came back from retirement. It's only fitting that a doubler would come back for a second time. And yet, in the seedy world of Jita, controversy and rumors flow as easily as the isk. Some have questioned Erotica 1's integrity and decorum. Since she is the CEO of a CODEdot corporation, an investigation was in order. 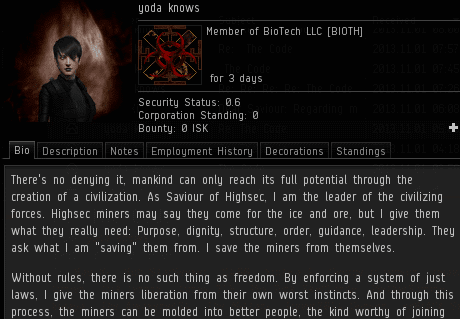 Highsec miner yoda knows had an alt ganked by an Agent of the New Order. As recounted in a previous MinerBumping post, yoda was invited to Erotica 1's bonus room and won big. But what really went on in the smoke-filled bonus room? How are highsec residents convinced to hand over all of their EVE possessions to Erotica 1? And what happened to yoda afterward?

In the interest of transparency, and to ensure that nothing untoward was going on in the bonus room (known as the "Glory Hole"), I delved into records that had been made about the yoda incident and sent to me by an observer of the bonus room. For the first time (well, not the first time, but roll with me on this), MinerBumping will take you behind the scenes to discover the secrets of Erotica 1's notorious bonus room. 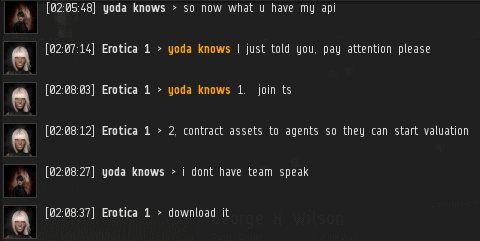 It began at approximately 01:50 EVEtime. Thanks to the time-stamping of the screencapper's chat, we can track the progress of this bonus room event. 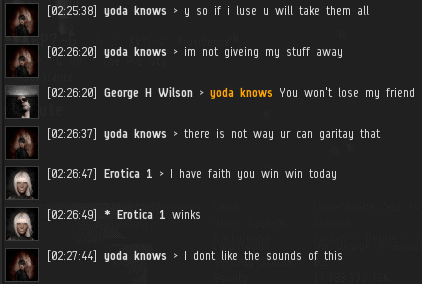 Roughly half an hour into the event, yoda knows had given away full API access to her account. But she resisted Erotica 1's appeal to transfer all of her assets, as is required in any isk-doubling bonus round. 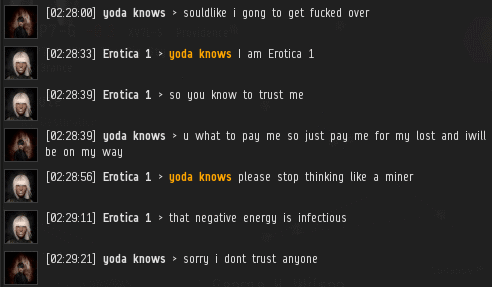 yoda did not yet have faith in Erotica 1. She was having second thoughts about the whole thing. How could Erotica 1 persuade her to give away her stuff? Rebels and skeptics would say that the bonus round participants are "bullied". We shall see. 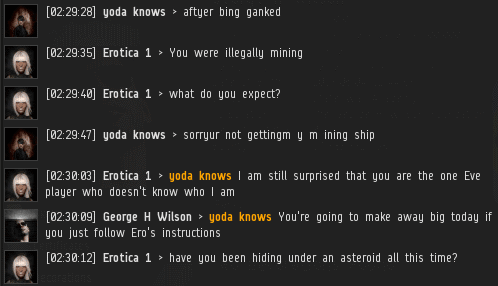 The source of yoda's reluctance was pinpointed. She was still suffering from shock after an Agent--apparently Bing Bangboom--destroyed her mining vessel. 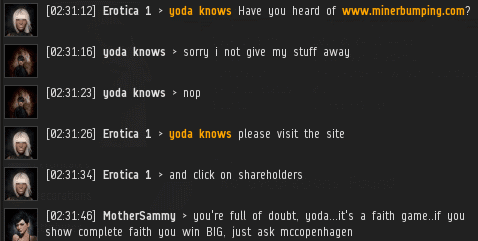 Erotica 1's decision months ago to purchase 24 billion isk worth of shares of New Order stock was a generous one. It also benefited her, because it gave her immense credibility in the highsec community. 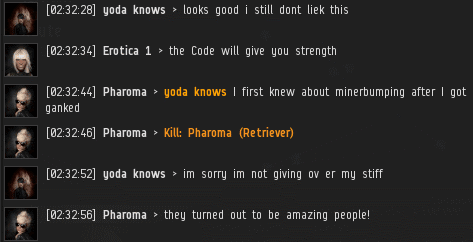 yoda was impressed by Erotica 1's shareholder status, but was still unconvinced. Pharoma jumped into the conversation with a different tactic. As someone who had lost a mining ship of her own, she could establish a rapport with yoda.

Along those lines, George H Wilson came up with an analogy that just couldn't be denied.

yoda was beginning to be won over by the logic. Maybe it did make sense to give the doubler her due. 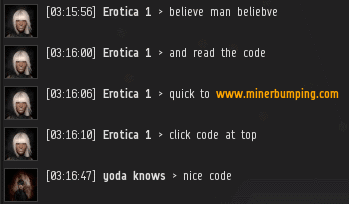 Forty minutes later, yoda had gone through and contracted all of her assets (including the mining ship) to the polite escrow agents who volunteered to facilitate the bonus round. 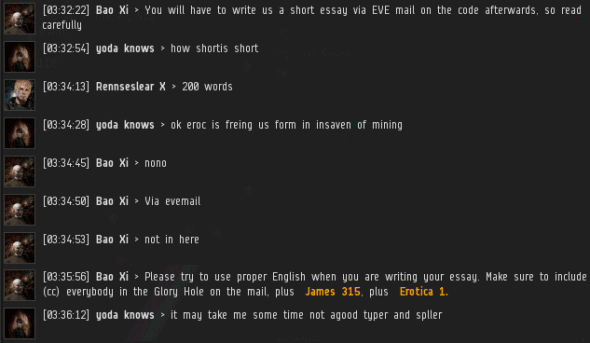 Giving up her assets was only the beginning. Erotica 1 and the rest of the bonus room staff were eager to help yoda fully understand and embrace the Code. What methods would they use? And would they succceed?

To be continued...
Posted by MinerBumping at 20:36