How Much Time Should Miners Have to Respond?

For those of you who don't follow the MinerBumping forum, there's been a debate there about how quickly a miner should be expected to respond in local after being called upon by an Agent. A miner writing under the name ne14a69 complained that he was bumped, even though he intended to reply after spending 20 seconds to finish up a comment he was making in corp chat. I gave ne14a69 the following advice:


"Imagine you were mining in nullsec and a hostile ship warped into the belt. Would you spend "maybe 20 seconds" to finish the sentence you were typing in Corp chat, or would you react immediately to the threat? Of course you'd react to the threat. Your sluggishness here is based on your perception that highsec mining is safe. Instead, in the same way you react to a nullsec threat, you should make it your number one priority to obey a command from an Agent while mining in New Order territory.

"Even if you were speaking with your corp CEO, you should put that aside in favor of responding to the Agent. Remember, in highsec, any Agent outranks everyone in your corp/alliance. If you absolutely must speak with your corp without interruption, then you can always dock up."

My rule of thumb is to require a miner to answer me within 5 seconds of being asked. After all, I'm not asking for them to write War and Peace or even to drop a "Praise James" in local. A simple two-character "yo" or "o/" or "o7" will suffice. 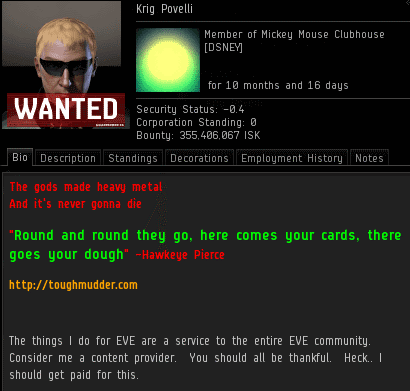 For the miners of highsec, it all comes down to what their local Agent requires of them. Each Agent of the New Order is given the authority to to judge for himself or herself what is necessary to ensure Code-compliance. Agents like Krig Povelli, for instance.

Krig did a routine spot-check of an ore miner in one of the Airaken asteroid belts. Living up to his name, Ace Eternity took forever to respond. Krig was sitting next to him in a Catalyst. You do the math. 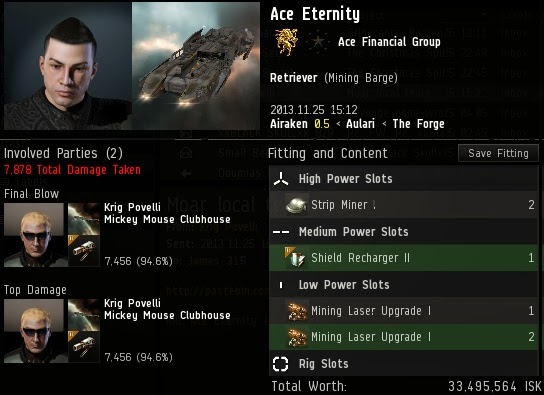 Krig opened fire and outfought the miner. Without a ship to mine in, Ace left the system. The story might have ended there, with the happy ending I just described. However, the local miners were shocked by the death of their fellow oremonger, and they expressed their outrage.


Josephine Sauveterre > Maybe you should be realistic and give people more than 40 seconds before you pass judgment? He might be off changing his kids diaper or something..
Krig Povelli > 40 seconds is more than enough time
Runawae > to change a diaper ?
Krig Povelli > He should always be vigilant
Krig Povelli > One should not play Eve Online while watching kids
Runawae > I hate you to do it on 40 sec

It was your classic miner excuse. "What if I have to change a diaper? What if I have to help fix someone's plumbing?" Let's get real. The bot-aspirants who hoard isk and mine in contravention of the Code are not going AFK to save the world. They're probably pursuing their own selfish desires, just like they do in-game.

If you've ever enforced the Code, you've probably heard miners like Josephine pull the "you can't tell me what to do unless you pay for my subscription" card. I've never understood it. Do they think The Mittani pays for tens of thousands of other players' subscriptions before he acts as leader of his coalition? Or is a miner entitled to anarchy in highsec for some arbitrary reason?

How can you tell the difference between an Agent and a tyrant? Both have total authority over the people they rule. What sets them apart is that Agents care about helping people, not about boosting their own egos. Despite Ace's giving him the silent treatment, Krig thoughtfully sent him an EVEmail about me and my teachings. So much for the "douchebag" theory.


Josephine Sauveterre > Well, bot or not, 40 seconds is not reasonable. I don't log off my miner if my kid wants me to make her a sandwich, or if I want to go take a piss.. Since you don't realize that, you're just a douche. There's no honor or integrity in what you do.
Krig Povelli > - No AFK mining allowed. All miners are expected to remain at their keyboards at all times, and are required to prove their presence by responding in local when requested by the Supreme Protector or one of his Agents
Krig Povelli > http://www.minerbumping.com/p/the-code.html
Partisan Noir > that epic discussion
Krig Povelli > - Upon being suicide ganked, a miner should congratulate the ganker on his success. A "good fight" or "gf" in local is customary.
Krig Povelli > where is my "gf"?
Veronica Badasaz > ohh no they dont

Josephine attempted to continue the debate. She was at a distinct disdavantage. She had her opinions, but Krig was armed with the Code. And he wasn't afraid to use it.

Backed into a corner, Josephine had no choice but to return to her vulgarity of choice. She couldn't concentrate hard enough to come up with more excuses for AFK mining.

The rebel miners, carebears, and bot-aspirants of highsec may not admit that they respect us, but they do covet our power. To them, the ability to command a highsec miner is a sign of omnipotence. In their world, maybe that's true. For most, power tends to corrupt. Yet the Agents of the New Order have proven to be incorruptible. So when an Agent stops by and asks if you're AFK, you can be sure that they'll give you a fair, appropriate amount of time to answer. If you spend that time unwisely, you only have yourself to blame.
Posted by MinerBumping at 22:08