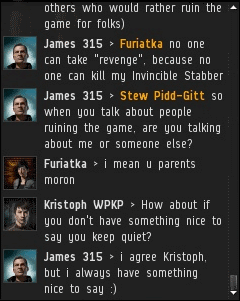 If this were a truly multimedia experience, you would hear a sound right now. And you know what that sound means, don't you? It's time for yet another edition of the Highsec Miner Grab Bag! But first, one of our Agents wants to give us an update on a professional carebear, Reaver Revaer, whose tears/surrender appeared in a recent post:

MinerBumping is always interested in getting the full story, so let's find out if Reaver redeemed himself a bit in his follow-up EVEmails to Agent Shnjago...

This isn't the first time a miner has gratuitously invoked the nation of South Africa. Unfortunately, meet-ups like this never occur, because the South African carebears never threaten South African Agents. Bad luck, I suppose.

Finally, Reaver reassures us that he hasn't been pissed off "yet". Sometimes I find it difficult to trust carebears. They lie about having powerful friends in nullsec, so how can we believe them when they say they're calm? 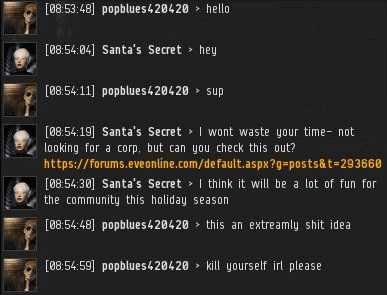 Meanwhile, Santa's Secret made the rounds in highsec, urging players to participate in some gift exchanges. popblues420420 is already getting into the Christmas spirit.

At first, I assumed my bounty notification meant that another misguided rebel put some more isk on my head. Actually, he put 20 million on my corporation, Experimental Fun Times Corp RELOADED. When the corp inevitably folds and re-opens, that's another 20 million down the drain, I'm afraid. 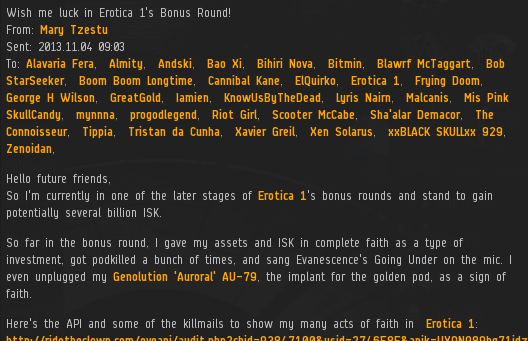 It's very suspenseful whenever I receive an EVEmail from a participant in Erotica 1's bonus room. Will the player win big? Or will they break the rules?

...Another disappointment. I wonder why Mary Tzestu had such difficulty reading the Code? According to the MinerBumping site statistics, the Code page has been accessed over 71,000 times. There's no telling what percentage of the readers really absorbed it, though.

It's often said that holiday season is the most stressful time of the year. Maybe that explains why so many highsec residents are pondering the real-life deaths of EVE players lately. 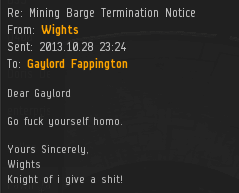 As we've seen, Agent Gaylord Fappington has earned the admiration of EVE players far and wide. Despite their extraordinary level of power and fame, New Order Agents always remember where they've come from. For example, the time they spent dealing with miners like Wights.

Helping the worst miners of highsec realize their full potential--it keeps us rooted in the community. 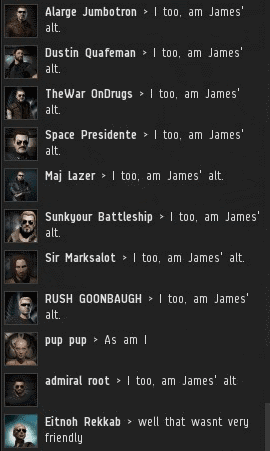 From the beginning, the New Order has inspired denialists of every stripe to see a James 315 alt behind every face they see. For most people, these accusations are good for a few chuckles, or perhaps a "Spartacus" reference. 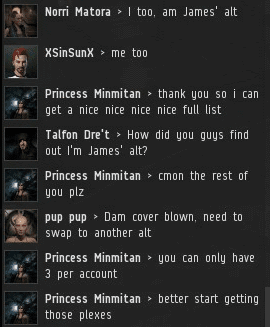 ...But for others, the delusion of the Infinite Alt Theory is all too real. By this point, I would need SOMER Blink's wallet to fund the PLEX of all the alts I'm supposed to have.

If by "last summer" Pabst Thellere was referring to the summer of 2012, then of course he knows what I did. Everyone knows. That's when I wrote the Code and founded the New Order. Every child who takes a civics course should know that!
Posted by MinerBumping at 23:05