My Brother Did It, Part 1

When it rains, it pours. And when Rayne pours, he pours Heavy. Recall the following EVEmails from the Highsec Miner Grab Bag #45 a few days ago:

When I read these EVEmails, I disgusted by Heavy Rayne's admission of account sharing. If he hadn't been so foolish, everyone in Erotica 1's bonus room could've celebrated his big win. Instead, they could only mourn. But I was skeptical of Heavy's claim about getting podded 81 times. Until I took a look at his killboard, that is... 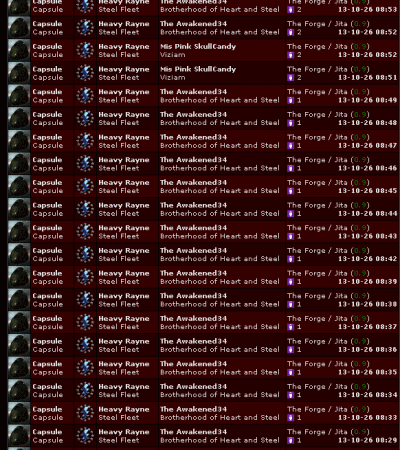 According to Eve-Kill.net, Heavy was podded in Jita at least 56 times in a row. Only kills made by those with their API's on file with Eve-Kill.net appear, so suddenly the 81 pod claim was credible. Impressive. But then I was contacted by Erotica 1, and I learned that there was much more to this tale than met the eye. Let's start from the beginning.

It was a day like any other. Heavy had sent Erotica a nice chunk of isk for doubling, and he earned a free ticket to the bonus room.

Everyone knows that in order to win in the bonus room, one must show complete faith in Erotica 1. Fortunately, Heavy Rayne seemed like a faithful kind of fellow. Over the course of the next few hours, he systematically transferred all of his assets to Erotica 1 and sang a song. Then the podding began.

Heavy Rayne broke the record of poddings. Since he didn't update his clone between deaths, he lost skillpoints each time. Many years ago, EVE was even more unforgiving: A single death in a non-upgraded clone could result in the loss of nearly all skillpoints. Today, you only lose some of your skillpoints, starting with the loss of your most skillpoint-intensive skills. 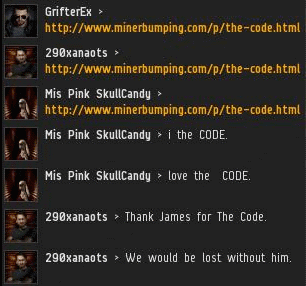 In response to Heavy Rayne's 81 pod losses, everyone in the bonus room gave glory to the Code. They knew none of this would have been possible without it. Not a day goes by that highsec isn't blessed by the Code. Heavy Rayne's time in the bonus room didn't end so happily, though. He admitted that he was going to transfer isk from a character named Kiarrah, on his brother's account. Account sharing is against the EULA, so Heavy lost out on his chance to win.

But the story doesn't end there. No, that's where the story begins. And since Heavy gave his full API to Erotica 1, we can read the EVEmails that help tell the rest of the story.

Just a FYI all, I was contacted by Heavy Rayne / Kiarrah thismorning. He stated to me he fell for some kind of Goon scam? where he had to POD himself 50 times and give away all his assets? well after he told me this and I started thinking about it I looked at the KB and all 50 of his POD losses are on there. At this point I am NOT sure what to think. As an emergency immediate precaution I have removed BOTH Kiarrah and Heavy Rayne from the Corp pending an Investigation. I also started a new Corp Vote for new CEO of Steelfleet.. Thank you for your time.

Heavy Rayne and his brother--or is it his alt?--belonged to the same corp. Cryptic Powers, the CEO of the corp, were alarmed to see that his corp's killboard was "ruined" by the pod deaths. Heavy and his brother and/or alt were immediately expelled and an "investigation" began. Since the ruination of the killboard occurred on his watch, Cryptic stepped down as CEO.

hey as the new CEO i saw your loos's on http://eve.battleclinic.com/killboard/combat_record.php?type=corp&name=Steel+Fleet

I was wodeering if we could talk so i can get a better idea of what happened. I consider you an asset to this corp and want you here, but this type of stuff can't be happening especially with the timming of us trying to get in an alliance.

WOuld it be possible to schedual a meeting when you have time?

when can you meet on ts?

The new CEO agreed that the corp's number one priority was the preservation of good killboard stats. Otherwise, how could they get into an alliance? In the meantime, Cryptic Powers would do the gumshoe'ing himself, even though he was stepping down as CEO. Cryptic was a man who liked to clean up his own messes. Where to start? Erotica 1's bonus room.

Cryptic wasted no time in beginning the investigation. He ran into Erotica 1, who is your classic femme fatale. Fortunately, however, she was in a helpful mood.


Erotica 1 > we did the bonus round
Erotica 1 > Sadly within a hair of winning, he lost
Cryptic Powers > how did he loose?
Erotica 1 > he said he was logging into his brother's account to get the isk he needed for his red pen mining permits
Erotica 1 > I can't believe you don't have all your corpmates purchase New Order mining permits on day one

The story was simple. Now that Cryptic had it, it was only a question of what he would do with the information. Would he sanction Heavy Rayne for his EULA violation, or would he pop off at Erotica 1 and put all the blame on the New Order?

To be continued...
Posted by MinerBumping at 19:54