A couple weeks ago, I announced that the CODE. (CODEdot) alliance reached a milestone--that it meets the requirements to qualify for an official, in-game alliance logo. Since then, we've tossed around some ideas for a potential logo, and some artists have produced mockups. Now it's time to narrow things down.

As I reviewed the different possibilities for CODEdot's logo, I found myself continually circling back to the same thing--myself. My face is now one of the most recognizable images in the EVE universe. If you're like most highsec dwellers, just take one look at it and you immediately get an emotional reaction. A demonstration, if I might? 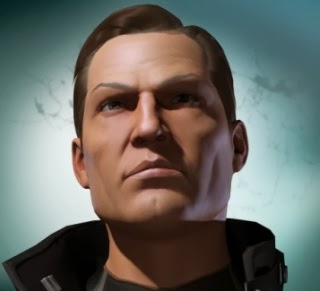 You see that I wasn't kidding. When a carebear, bot-aspirant, or rebel miner looks at a corporation whose alliance logo is my face, he knows immediately what it's all about. That's a powerful thing.

There are a few other advantages to having my face be the alliance logo. For one thing, CCP couldn't reject the image on the grounds that it doesn't "fit the EVE universe", since my face is already an in-game image. As far as I know, no EVE alliance has ever used a character portrait as its logo. The New Order is in the business of making history, so it's only fitting that CODEdot would break new ground. And, of course, having my picture be the alliance logo would be a stinging rebuke to those who accuse me of arrogance, "attention-whoring", or running a cult of personality.

So there you have it, artists. My mug is your new canvas. Make the best of it. To get the high-def image of my portrait from Eve-Gate, go to this link.

You can read the official specifications for a logo image, but to make a long story short, the image must be 128x128 pixels. If you upload a 128x128 image to a host such as Imgur, all you need to do is send us a link and we can work with it and put it into the proper format.

This isn't a simple copy-and-paste job. Since the image can only be 128x128 pixels, you'll need to get creative, to get it into the right shape and zoomed in enough to make it easy to see in such a small size. For example:

The above is 128x128, and is just an example to give you a sense of the scale, not necessarily a prescription. You're artists, so use your imagination. Your biggest job will be to replace the blue portrait background with a proper background. With only 128x128 pixels to work with, you can't make anything too elaborate, but I'm sure you'll come up with something that really makes my face pop. (Or you can just use a transparent background.)

If you have an artistic impulse, get to it. I'd like to have all submissions in within a week or so. If we have a bunch of good ones, we may put this to a vote. Good hunting!
Posted by MinerBumping at 20:02