The Spark of Creation

I don't know what it is about miners who have the word "spark" in their name. In "How to Strike a Spark", we met a carebear named Spark2Universe who shed very large quantities of tears about his dead Hulk. We also witnessed a sizable volume of the same miner's tears in the follow-up post. 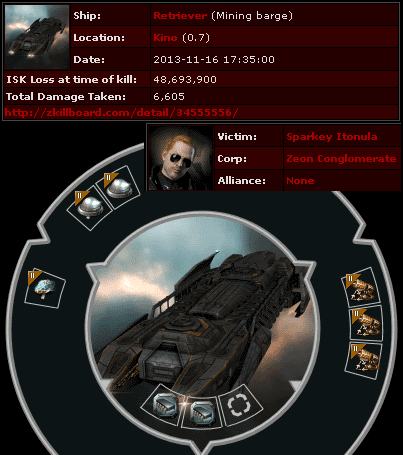 Meet Sparkey Itonula. He lost his Retriever while illegally mining in highsec, and he was still quite sore about it a full twenty-four hours later. At this rate I'm going to run out of "spark" puns for the titles of these blog posts. 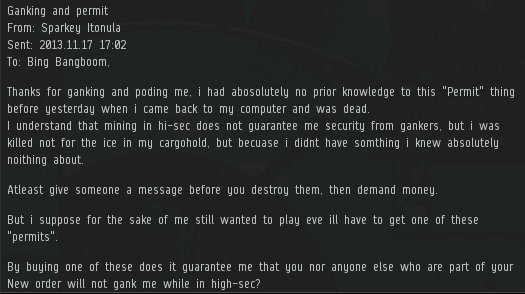 Sparkey plead ignorance of the New Order's existence, despite having played EVE for three months. Apparently he'd been playing the game with all chat windows minimized, never went to EVE-O, never shared an EVEmail with anyone, ignored all convo requests, never read MinerBumping, and generally spent the last three months walking around with cotton balls in his ears. In three months, he never once set his mind to following the Code or praising me. He even admitted to mining AFK in his EVEmail. Clearly, this was a miner who deserved to die.

Agent Bing Bangboom came to the rescue and gave Sparkey some good news about the Code and how it applied to his new, post-Retriever life. Now the ball was in Sparkey's court. Unfortunately, he would drop said ball.

Sparkey replied with a lengthy EVEmail that revealed some disturbing attitudes and beliefs. But let's jump right to the part where he discusses the Code. First of all, I never described the miners as a "pestilential cancer" in the Code. The New Halaima Code of Conduct states:


"Most EVE players view the highsec miners as a detestable, pestilential cancer. As Saviour of Highsec, I still find the strength to occasionally perform acts of mercy where the miners are concerned."


"For instance, even when the miners spit vile insults at me in local, I do not respond in kind. Why not?... [I]f allowing the miner to vent his profanities toward me in local saves his wife or children one extra beating, that's something I'll gladly take. The miner has to take it out on somebody, and I'd rather it be me than some household full of children out there."

Take note that nowhere in the Code does it describe all miners as wife-beaters or child-beaters. It merely explains that I allow miners to vent their anger at me, rather than responding in kind. Highsec miners are often very angry people, a fact which is well-documented on this blog. Sadly, we can extrapolate that a non-zero percentage of angry miners mistreat their families. I wish that weren't the case, but the math tells us it must be so. Domestic violence is no laughing matter, and it's a shame Sparkey tried to use the subject to score some cheap points to advance his agenda. The New Order, on the other hand, will take no part in gutter politics.

I'll put aside Sparkey's dubious claim that he "enjoys" AFK mining, as Bing will cover that later. Let's focus on Sparkey's further misrepresentations of the Code. He asserts that the Code states "bumping is all that will happen if you mine AFK in highsec". Citation needed! I don't know where Sparkey downloaded his copy of the Code, but it wasn't from MinerBumping dot com. My copy of the Code states:


"Goofus whines in local after being suicide ganked.
Gallant thanks the ganker for teaching him a lesson." (emphasis in the original text)

Obviously, the Code envisions the possibility of miners being suicide ganked. Otherwise, when would the Goofuses and Gallants do the things mentioned above? Sparkey also complains that he's only allowed to challenge me if he performs "101 tasks". Really? One hundred and one tasks? Someone please check the torrent sites for pirated, inaccurate copies of the Code. The actual New Halaima Code of Conduct states:


"To demonstrate your honour, you must pass one of the following three tests..."

How many tests does the carebear need to pass? One out of three! So one is a hundred and one? Talk about exaggeration. It's amazing how often carebear criticisms of the Code are based on misinterpretations of the Code. This is more proof of the perfection of our Code. Otherwise, wouldn't the carebears devote some of their time to making legitimate criticisms?

More confusion on Sparkey's part. A dictatorship? Pshaw. Although I have absolute authority, the New Order is a representative democracy. In any event, I never claimed to control everything in EVE. Just highsec.

I suppose the Hitler reference was inevitable, unless he was referring to some other German leader in World War II. More misunderstandings of the Code follow. Although it's true that I require the people of highsec to both obey the Code in their actions and agree with the Code in their thoughts, I would never try to make life terrible for those who disobey. How would the New Order accomplish that? By shooting at people's spaceships? If someone played an FPS, surely they wouldn't claim "life is terrible" when other players shoot at them. 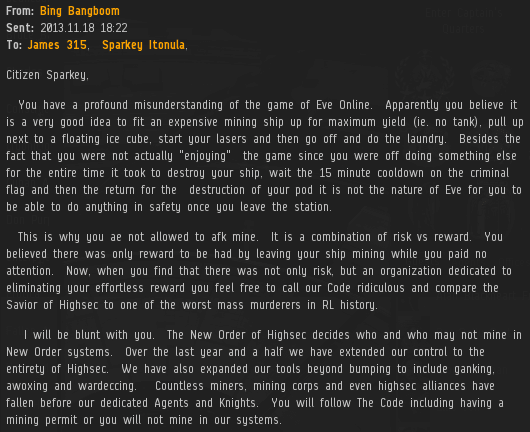