My Brother Did It, Part 2

Previously, on MinerBumping... Heavy Rayne nearly won big in Erotica 1's bonus room. Things started well, with Heavy transferring all of his assets to Erotica 1 and allowing himself to be podded in Jita 81 times without upgrading his clone. But then he admitted he was about to commit the EULA violation of account sharing by transferring isk from his brother's account. When the dead pods were discovered on the corp killboard by Heavy's CEO, Cryptic Powers, Heavy and his brother's character were expelled. 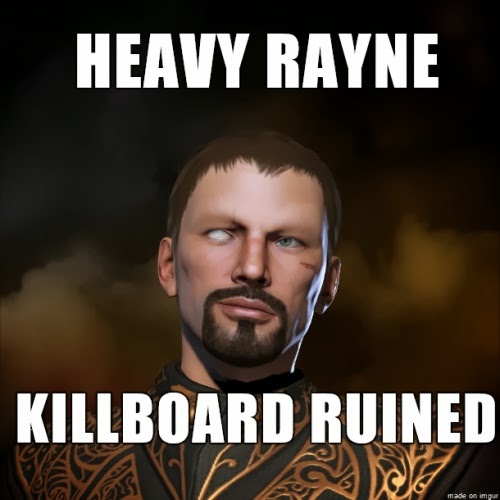 Jack Lennox supplies the meme. We rejoin the conversation between Erotica 1 and the ex-CEO, who was completely obsessed by the kill-to-death-ratio-busting bonus game.


Erotica 1 > brb
Erotica 1 > popcorn in microwave
Erotica 1 > ok
Erotica 1 > continue
Cryptic Powers > ok well I'll make it short then. Essentially I'm turning it into the GM's as a hijacked account enjoy your popcorn. you guys have no concept of what you did to the poor guy nor how you effected our corp

The CEO got everything turned around. He blamed Erotica 1 for the whole mess!

Cryptic was told about the account sharing issue, but he shrugged it off. He was furious at the ruined killboard, and was replaced by Stud Duficious, who stepped up as the new CEO.

I'm the new ceo and i don't know who kicked you from corp. I was wanting to hear back from you and your brother befor we kicked you to give you a chance to expain what happend with that 50 pod kills in jita. If you make your case we can get you back in steel fleet if u want back in.

Though Heavy Rayne and his brother were now unemployed, the new CEO was interested in getting them to rejoin. They were too valuable for the corp to lose. Even though Heavy no longer had any assets to his name.

Heavy returned to Erotica 1's bonus room. Gone was the enthusiasm and faith that had marked his first visit. Now he only brought complaints and a grumpy attitude.

Suddenly, a Columbine reference out of nowhere!

No one hates school shootings more than the New Order. We know that a free, democratic society like the one we're trying to build in highsec depends on an educated populace.

Everyone in the bonus room rallied together against Heavy Rayne's unfair charges. What would he try next?


Heavy Rayne > you are a group of greifers who thought up a way to scam people while looking legit
Psychotic Monk > Is some lucky customer doing a bonus round?
Bao Xi > He literally is trying to say we scammed him
Erotica 1 > Heavy Rayne lost bonus roun the other day
Bao Xi > He threatened to violate the EULA
Zenoidan > He tried to cheat.
Heavy Rayne > dude you flat out scamed me

Heavy tried to shift the blame to the New Order, accusing everyone of scamming him. But he was the one who threatened to violated the EULA by accessing his brother's account. He had no defense.


Zenoidan > We have to put it to a vote
Zenoidan > but his brother must be in TS...
Heavy Rayne > its not going to happen
Heavy Rayne > like i said
Bao Xi > Can you tell us why not?
Bao Xi > Because you suggested you had access. If you are saying you weren't going to steal the stuff, I am left to assume your brother would be 100% okay with participating
Heavy Rayne > as i explained hes married and when he home he devotes all his time to his wife
Heavy Rayne > when he can hes a truck driver liek me but sometime he goes 1-3 weeks with out playing

Heavy threw out some excuses about why his brother couldn't show up and defend him.

Heavy's brother was nowhere to be found. Heavy would sooner solicit a good reference from the CEO who just fired him, than from his own brother. This raised suspicions. But Heavy insisted he wasn't his brother's keeper.

Then Heavy Rayne sent an EVEmail to the new CEO of his former corp, claiming that his brother had used his account to play the bonus round. Now the situation became confused. Who was the real owner of the Heavy Rayne character, and was he the same person who was in control during the bonus round? If not, why did he say he was going to log into his brother's account--when the other account would have been his own?

i understand. i would be upset if my brother did that to me as well. I titally get it if you decide not to play the game anymore, because i would have similiar feelings. If you do decide that you want to continue playing and want back in the corp i'm sure we can get you guys back in the corp.

What your brother did, had a very negative effect on our corps kill board. If there is anything that we can do to help, let me know.

Heavy Rayne stuck to his story: He was the innocent brother, and the account-sharing brother was the one who got himself podded 81 times. Regardless of the story, neither brother was innocent, because they were sharing passwords either way.

Heavy Rayne petitioned CCP, claiming his brother had accessed his account and gotten himself podded. CCP didn't return the money/assets that had been transferred to Erotica 1, but despite it being against the rules to share accounts, CCP was surprisingly receptive to the "my brother did it" excuse. The Heavy Rayne API revealed that CCP restored all of the lost skillpoints to the Heavy Rayne character!

Could this be the beginning of a new, family-friendly policy? The next time your "brother" does something foolish with your EVE character, you might stand a chance at getting the mistake reversed.
Posted by MinerBumping at 19:42