Highsec is continually gifted the benefits of a creative, inventive New Order. As soon as I heard Agent Kalorned was running a "police blotter" for the Gamis area on Twitter, I knew it would be a treat. You can follow it yourself at @NewOrderGamis. Let's have a look!

Modern technology is an amazing thing. Through the power of Twitter, we can watch highsec miners become more educated about EVE in real-time.

I should be banned from EVE because I care about highsec? Carebear logic.

Miner Jacob Carter Torchwood has a warning for all New Order Agents. Actually, most of the time, we don't realize there's a rebel organization against us.

...Isn't "Anti-Code Intel" an oxymoron? All of the intelligent people in highsec follow the Code. 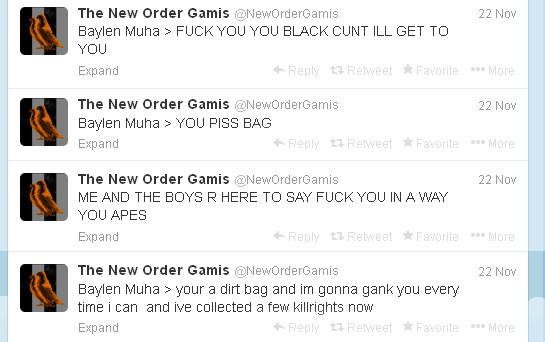 Some carebears are special. They prompt multiple tweets.

Just the other day I was complimenting a miner for his creative excuse for mining without a permit, but Grummangy Otomeya takes the cake. "I wasn't AFK, I was just... fixing someone's plumbing." What's next, miners going AFK to save orphans from a burning building? Seriously though, if you do have a life-and-death emergency and don't have time to dock up, you can always quickly hit Ctrl+Q to leave EVE, rather than going AFK in one of my asteroid belts.

Ever since Mine Teck uttered his bone-chilling threat of "I have kill rights, and I will use them," miners have gotten very excited about earning kill rights on those with -10 security status.

Incredible! You can actually play Miner Bingo through Twitter now!

To be fair, sometimes the rebel miners produce content as well. Take Nofearion, the subject of the last tweet, for example. He's a rebel miner who lives in highsec despite being a member of Pandemic Legion's renter alliance, the Brothers of Tanagra (ticker: B0T). Nofearion linked an EVE blog in his profile. It only has four entries (the most recent of which being a year and a half ago), but it's a work in progress. In the interest of balance, perhaps we ought to give equal time to rebel blogs, not just Agent Twitter feeds...

On the other hand, maybe we'll put less focus on the rebel blogs.

Kalorned concludes his EVEmail with a suggestion. Should we use a New Order hashtag? EVE-related tweeters typically use #tweetfleet, and maybe the New Order ought to have its own, too. #minerbumping seems a logical choice. While you're at it, tweeters, give ol' @NewOrderGamis a tweet if you appreciate his fine work.
Posted by MinerBumping at 19:40