Double Your Pleasure, or Over 137 Billion in Shares Sold

Uh oh, another one of these EVEmails landed in my inbox... 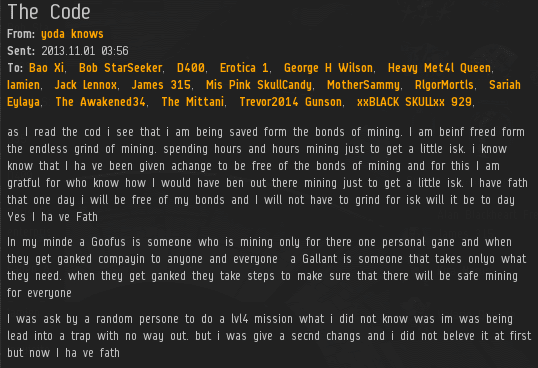 Highsec miner yoda knows sent unsolicited EVEmail to a bunch of people, talking about her "fath". I knew that Erotica 1 requires absolute faith to double an EVE player's isk, so I immediately suspected she was somehow behind this.

Then it was confirmed. But just as Erotica 1 was putting yoda through the tests of faith, she was forced to deal with local power outages. Hopefully that wouldn't jeopardize yoda's chance to win big in the bonus room.

Over an hour after her original EVEmail, yoda repeated--indeed, expanded--her professions of faith. She didn't want to be a miner anymore. If anyone was going to win in Erotica 1's bonus room, surely this would be the person to do it.

yoda had been induced to post a thread on EVE-O:


"I was asked to join a fleet to do a level 4 mission. what I did not know was that I was waking into a trap[:evil:][:twisted]. A trap with no way out. I lost my brand new mission ship to the hands of Bihiri Nova. I was not happy I was approached by Erotica 1 with a changes to win her bones round I did not think that i was real i thought i was another trap. I had just lost all my Isk and ship[:ugh:] and how way to get it back but spend hours and hours mining[:(] to try and get my isk back. I had to give up everything and have father that I would win the bones round. after staring the round i started to have more and more faith that everything would work out . the the end of the round i now have total fath that everything will work out and i will be free the inseminate that is mining. I now what to free the next person in line. I what to fill them with fath as i have been filled with fath by Erotica 1 and the NEW ORDER" (emphasis in the original)

When I say "emphasis in the original", that's actually a bit of an understatement. I inspected the post by pressing the "quote" button, and found that the words "NEW ORDER" were actually flanked by multiple, redundant pairs of bold and italics tags. Still, yoda's heart was in the right place, and she was enthusiastic about winning. 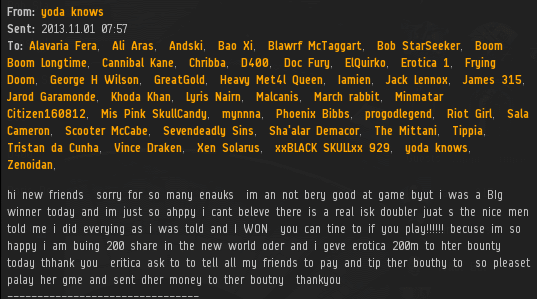 My heart skipped a beat when I read that yoda had been victorious in the bonus room, and now had enough isk to make a generous contribution to the New Order. Could it be?

It could. yoda's wallet jumped up to 1.5 billion isk. Erotica 1's payment comprised the entirety of yoda's wealth, aside from a few sets of 315 isk that had been sent by Agents to help her pay for my EVEmail spam fee. 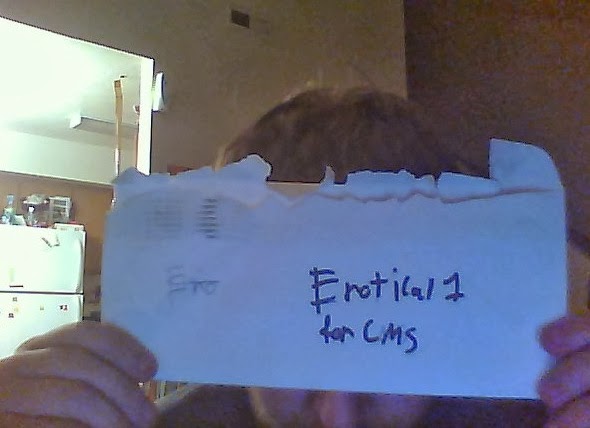 From her lovely apartment, yoda also took a photo of a written note supporting Erotica 1's rumored bid for CSM.

yoda was excited, and couldn't stop sending EVEmail to people. Many of the recipients of said EVEmails were bright stars in the firmament of EVE.

Not everyone was as happy to read the mail as I was. 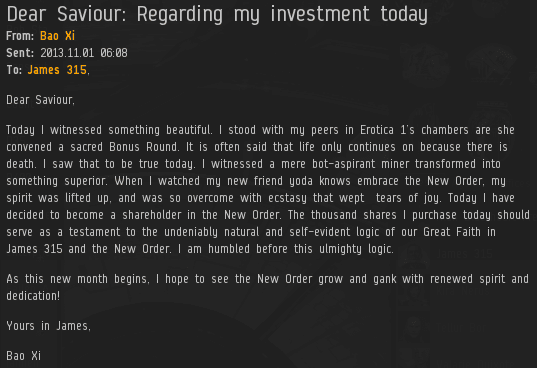 But you know who was happy? Bao Xi, who was inspired to purchase 1,000 shares in the New Order. Bao Xi sent us over the 137 billion mark, and he earns a Supreme Protector's Tip of the Hat™. 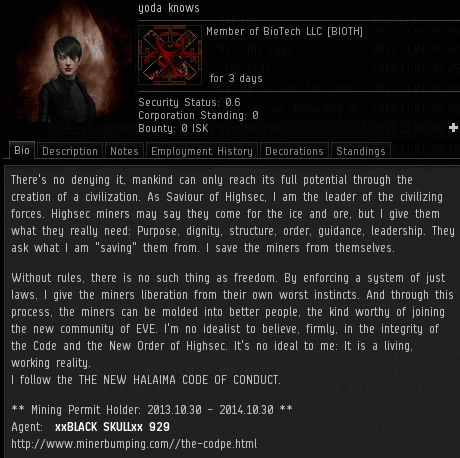 How did yoda get so lucky? It's called karma, folks. Just two days earlier, yoda purchased a mining permit from Agent xxBLACK SKULLxx 929 and updated her bio accordingly. From that moment forward, she was a new person. She was unstoppable. Carebears, if you wonder why you have bad luck, take my advice: Follow the Code, and great things will happen.
Posted by MinerBumping at 19:30