Previously, on MinerBumping... We pulled back the curtain on Erotica 1's notorious bonus room, also known as the "Glory Hole", in which participants must demonstrate total faith to win big. Miner yoda knows was ganked by the New Order and found her way into the bonus room, where she transferred all of her assets to trusted Glory Hole staff.

Though she didn't have any possessions, yoda's acts of faith put her well on her way. Soon, she would be rich. To prepare her, Erotica 1's volunteers wanted to first ensure that yoda was reformed. 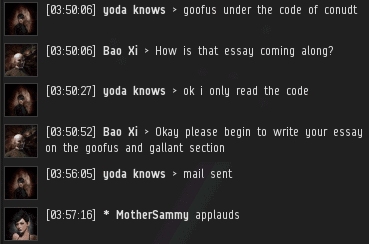 yoda was instructed to begin writing a series of EVEmails and essays on the Code. If yoda weren't grounded by the Code, she would only blow through the money anyway, making the whole exercise futile. 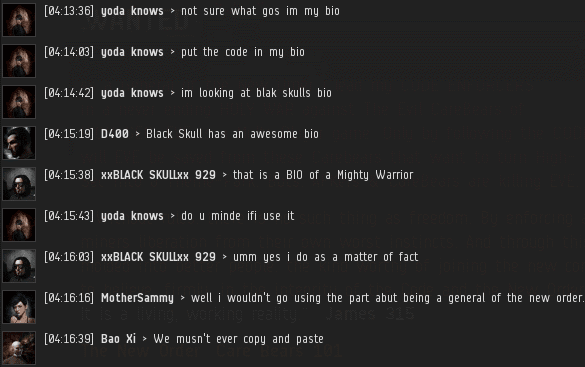 Old habits are hard to break. yoda considered copying Agent xxBLACK SKULLxx 929's bio. Eventually, she would come up with her own, though it was mostly copied from the text of the Code. 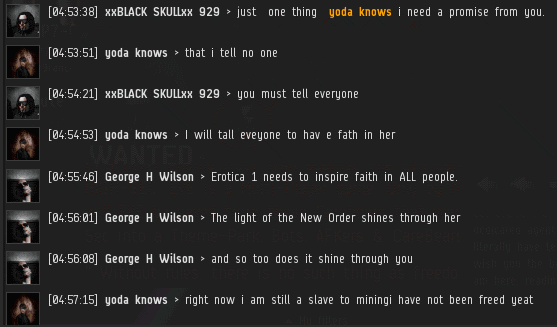 yoda understood that her journey was not yet complete. She still needed to get paid.

The bonus round began at approximately 01:50 EVEtime. Now it was starting to get late. yoda urged everyone to wrap things up so she could get some sleep. 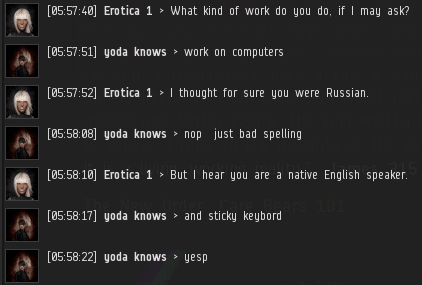 ...But it couldn't be rushed. Nothing would be worse than to give yoda her windfall precipitously. Erotica 1 filled the downtime by making idle conversation.

yoda's re-education continued, with Erotica 1 and her staff supplying relevant articles from Wikipedia for the lucky bonus round participant to read.

yoda remarked upon the relevance of the Saint Olga of Kiev article. Next came the traditional question of what yoda would do if the entire bonus event had been a scam. Some players are unnerved by this question, but yoda kept faith. She was rewarded by being showered with isk.

It had been a grueling 5+ hours, but yoda received all of her assets back plus a hefty bonus. As related in the original account of this story, she sent out EVEmails to a long list of people, including a link to a photo she had taken of herself with her face obscured by a sign reading "Erotica 1 for CMS [sic]".

So the story had a happy ending. Our review showed that Erotica 1's Glory Hole was ethically spotless and pure as snow. However, when someone wins the lottery, it's not the end of their story; it's only the beginning. Not everyone can handle it. Could yoda? Let's catch up with yoda knows and see how it all turned out.

Cannibal Kane was one of the recipients of the EVEmails. He was tired of having his inbox filled with such items, and promised to wardec yoda in retaliation. Though wardecs have been continually nerfed over the years, Cannibal is one of the few who keeps the art of wardeccing alive.

Several days later, Erotica 1 received an urgent EVEmail from Oman Darth, who claimed to be an alt of yoda. She was panicked. Cannibal was making good on his threat by wardeccing every corp yoda joined--including every corp yoda's alts joined. How did Cannibal know the identity of yoda's alts? Possibly this had something to do with the full API link that yoda had EVEmailed to everyone on the mailing list during the bonus round.

yoda wasn't kidding. The Oman Darth character had joined The Guardians of the Beam earlier that day. The corp was instantly wardecced by Cannibal Kane. 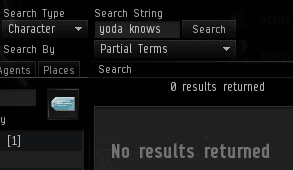 yoda knows felt she had no choice but to biomass herself. All of that effort to craft a proper, Code-compliant bio for the character was wasted. 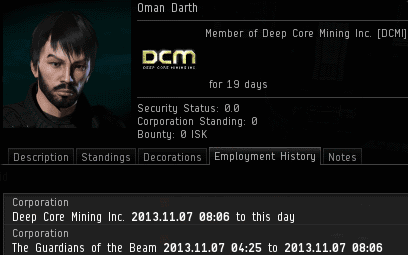 A few hours after joining The Guardians of the Beam, Oman was forced to leave the corp due to the wardec. Disappointingly, yoda lost faith in the Code and the New Order. She did not create a proper bio for her Oman Darth character. All of that money had gone to her head, and she'd forgotten that highsec is not meant to be risk-free. Rather than taking responsibility for her spamming of Cannibal's EVEmail, she evaded the wardecs and biomassed her beloved yoda knows.

This should be a lesson for all of us. A carebear can hide her true nature for awhile, even for a five-hour bonus round. But sooner or later, the bot-aspirancy comes out. And with it, the fatal consequences. Does that mean we give up? Heck no. It just means we fight harder to save highsec.
Posted by MinerBumping at 18:49