Have you been coming down with the flu? Well, you know what they say: Carebear tears are the best medicine. It's time for the forty-seventh edition of the Highsec Miner Grab Bag! 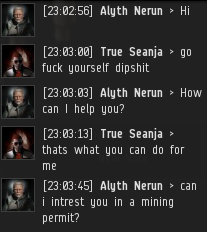 Agent Alyth Nerun is already making quite a name for himself, thanks to his excellent acts of Code enforcement. All of your Agent-aspirants out there, take notice: Enforce the Code in your local system and you'll make yourself indispensible to the community.

Virophage wins the award for the most creative excuse for bot-aspirancy this week. "The ore's not mine, officer--I was just holding it for a friend!"

Some miners think they can prove they're not bots by interacting with you after you've ganked them. No dice. Bots are run by human players who eventually return to their keyboards. To prove you're not a bot, you need to make nice with an Agent before you die, not afterward.

Are our miners learning? We don't ask this question frequently enough. Some carebears of highsec have become unwilling to read good literature. 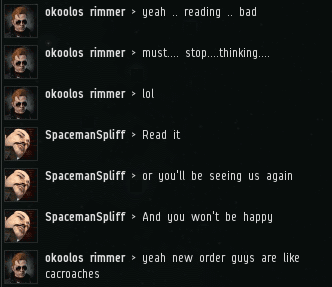 Literacy is incredibly important. I mean, come on... "Cacroaches"? Is that the best you can do? 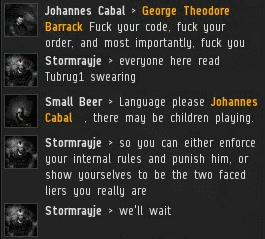 Stormrayje accused New Order Agents of failing to properly apply the Code. Guess if this space lawyer was any more successful than the rest? 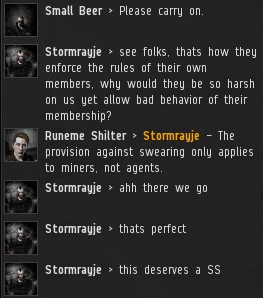 Protip: If you're going to challenge us on the Code, you might want to read the Code first. And don't just rush through it like it's any other slab of HTML you shoved into your browser. Read it the way it deserves to be read: Carefully, with tenderness, with a sense of awe.

EVE is a spaceship combat sandbox. Unless you're flying an Invincible Stabber, you're going to lose some ships now and again. Luckily even some rebel miners like Cameela Charante know not to lose their sense of humor with their ship.

Agent Fawn Tailor's successful gank was "an akt of Piraterie", according to miner Insomiaa. Hardly. You could call it an akt of équité. Or perhaps an akt of charité, or amitié. But never piraterie.
Posted by MinerBumping at 21:06