Highsec carebear 1trublond was puttering around one day, gathering space rocks in an essentially untanked Hulk. If she wanted to do that in nullsec, fine. In lowsec, so much the better. But she chose to mine in highsec--without a permit, even--and that made her actions illegal. The consequences of her folly were predictable: 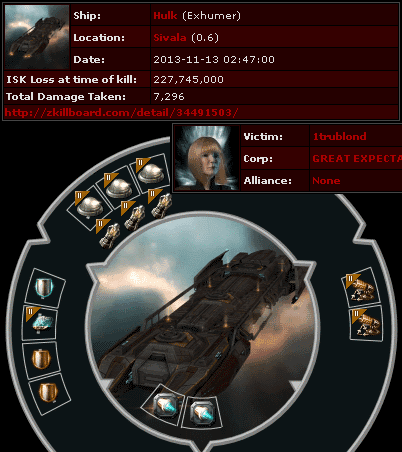 Agent Guybertini reported to the scene and tore her Hulk apart in seconds. Just like that, 227 million isk evaporated, and the New Order chalked up another impressive PvP victory.

Several minutes later, 1trublond finally returned to her keyboard. She was expecting some free AFK ore, but she got a free AFK lossmail instead. Guybertini's good deed was punished with a threatening EVEmail topped by a subject line that simply read, "DIE".

(On the other hand, 1trublond might be an Aryan-themed name. In which case, the subject line could be translated to read "THE".) 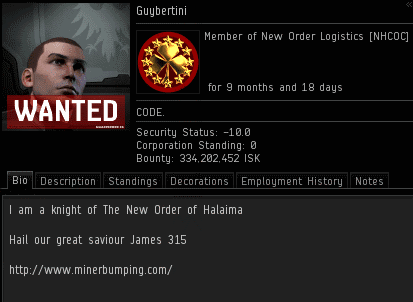 Most people would disregard a frothy-mouthed illegal miner like 1trublond, mentally assigning her to a steaming garbage heap of irrelevant carebears who aren't worth saving. But Guybertini isn't most people. He's an Agent of the New Order. That means he's not just elite at PvP; he's elite at compassion. 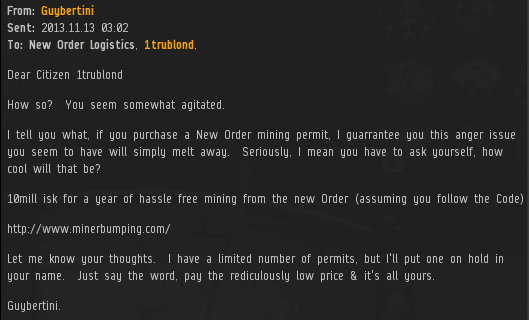 Guybertini stepped up to the plate in a big way. He sized up 1trublond's problems, devised a solution, offered it to her for (nearly) free, and prepared to welcome her to the New Order family.

...but 1trublond still needed some time to figure out where she belonged.

Perhaps 1trublond was in a place in her life where she needed to "find" herself. She could take some time off EVE to try backpacking through Europe, assuming she didn't already live there. The speedier alternative is to pay an Agent 10 million isk and follow the Code. This was the option Guybertini recommended, as he'd seen it work wonders on so many other troubled miners.

An hour and a half later, 1trublond worked up the courage to return to the asteroid belt and confront Guybertini. She found her own wreck, as well as the wreck of Guybertini's Catalyst. In her own precious way, 1trublond reached out with curiosity, inquiring about the methods of our Knights. She didn't understand why Guybertini blew up his own Catalyst during the suicide gank.

Guybertini was happy to explain everything, but decided against doing so. He knew there was plenty of time for 1trublond to read the Code at her own pace, after she'd forked over the money she owed.

Yet confusion reigned in the mind of 1trublond. A day after the righteous execution of her Hulk, she was still hurt and angry about it. Most people would look at Guybertini's kind face and mention of me in his bio, and they would deduce that he's one of the good guys. I suspect 1trublond understood this--she only treated him as an enemy because she didn't know that she could be one of the good guys, too. Perhaps if she loses more mining ships, she'll learn. The improvement of highsec continues.
Posted by MinerBumping at 21:19