Kills of the Week SuperPost

Apparently all the weirdos come out in highsec at this time of year. As a consequence, we have an extra-long edition of Kills of the Week for you. The following are some of the finest of the New Order's contributions to the peace during the week of October 27th @ 00:00 EVEtime through November 2nd @ 23:59 EVEtime. Enjoy! 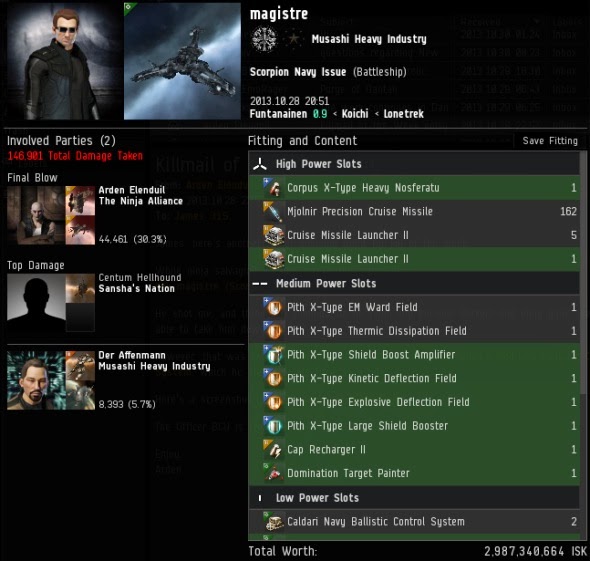 magistre thought he was perfectly safe flying a Scorpion Navy Issue with a ridiculous number of Pith X-Type shield mods in a 0.9 system. The only problem? All the 0.9 systems are firmly inside of New Order territory. Agents Arden Elenduil and Der Affenmann knew something had to be done about magistre's crime. Luckily, Der Affenmann happened to belong to the same corporation as magistre, and he got the ball rolling. Arden explains: 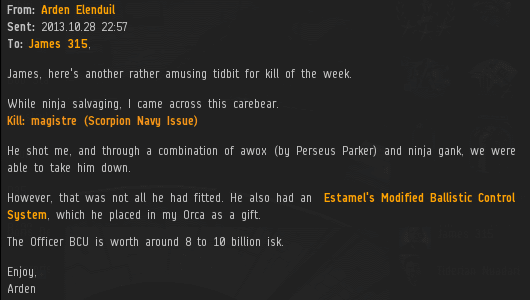 If Arden's valuation of the Estamel mod is correct, this is surely among the priciest losses ever suffered by a bot-aspirant. 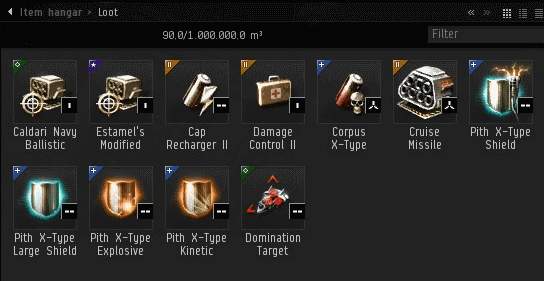 Hopefully magistre learned something from this experience. But history suggests he won't: 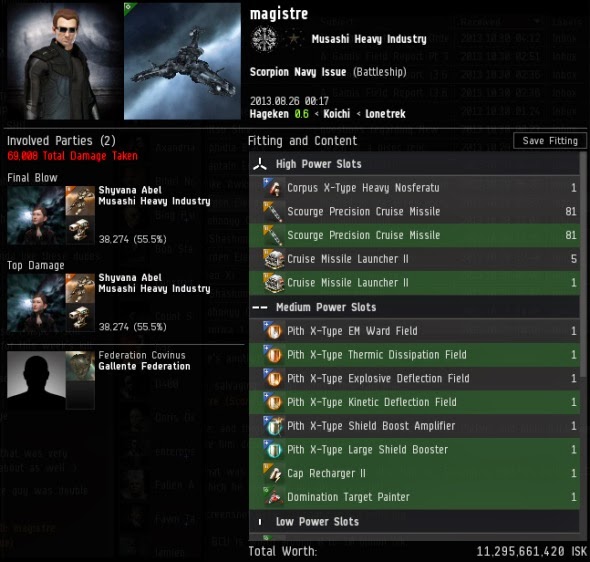 ...Incredibly, magistre lost over 11 billion isk when his Scorpion Navy Issue was killed two months earlier. And that was also a result of an awox! I'm glad to see people holding their fellow corp members to account. 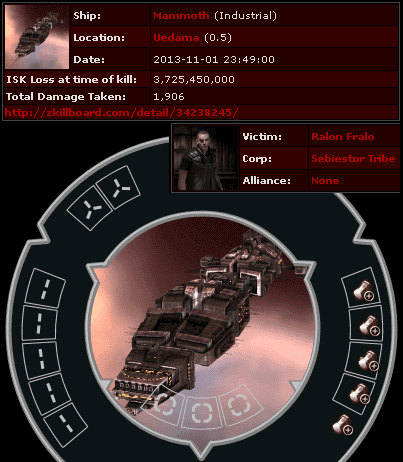 KILLMAIL
Ralon Fralo had some cargo he needed to move through the Uedama system, so naturally he put it into an anti-tanked tech I industrial ship. Guess who was there to greet him? Agent D400, of course. 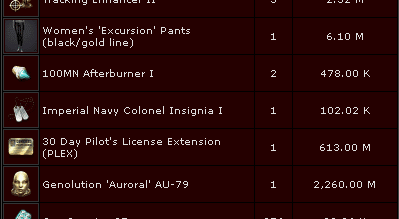 The cargo contained many expensive items, including a PLEX and a Genolution 'Auroral' AU-79. It also contained a surprisingly large collection of clothes. All told, the cargo was valued by Eve-Kill.net at 3.7 billion isk. Zkillboard estimates 5.6 billion was lost in the attack. A word to the wise: Next time you're out shopping for space-pants, save 10 million isk for a permit, OK? 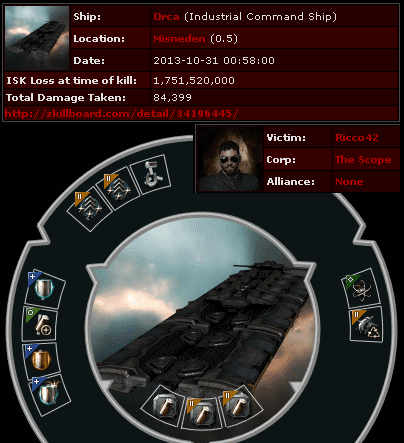 * As I've pointed out before, Orcas in EVE, unlike orcas in real life, do not breathe air, have hair, produce milk, etc. Therefore, they must be classified as fish. 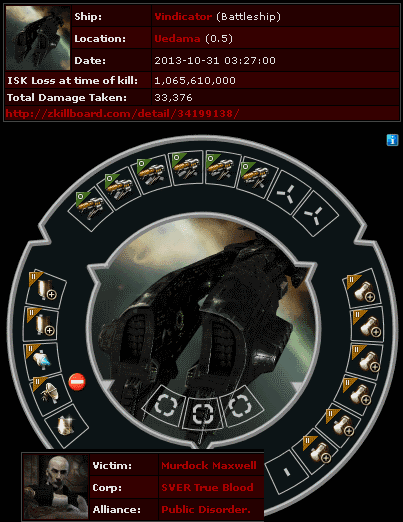 KILLMAIL
Murdock Maxwell's fate was sealed the moment he put mining lasers on a Vindicator. I was alerted to this kill performed by our friends at The Marmite Collective alliance: Demostress, Kushman, Anck'Su Namun, Ro Fidard, and Spin AnotherPlz. There's no question that Murdock was a bad egg, but who could have expected this: 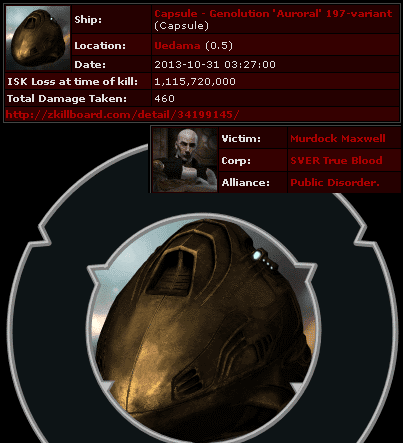 KILLMAIL
...1.1 billion isk worth of implants in a "gold pod". Our heroes patiently waited to ensure that all five of them got on the killmail. Murdock, you can paint the outside of your pod whatever color you like, but it's what's on the inside that matters to me. As far as I'm concerned, you're rotten to the core. Send me some isk and we'll talk it over. 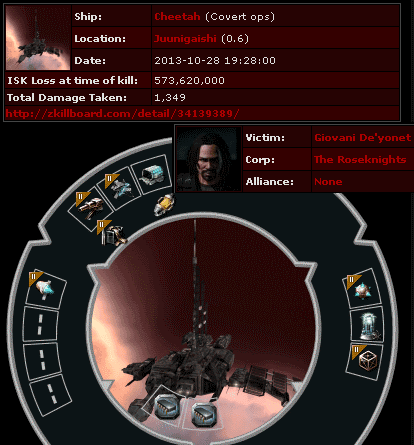 KILLMAIL
You might think Giovani De'yonet was acting a little foolish when he fit his Cheetah this way and auto-piloted in the presence of Agent D400. Actually, that was only the second-worst decision he made that day. His biggest error was to put 8 Republic Fleet 1400mm Howitzer Artillery, totaling over half a billion isk, in his cargo. All of them dropped. 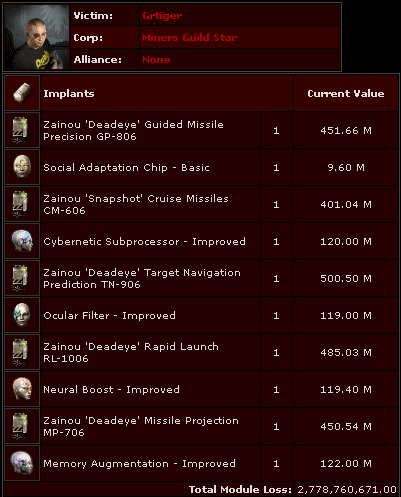 KILLMAIL
Grtiger lost 2.7 billion isk worth of implants that he'd hidden away inside a Covetor. Agent Krominal loves to find things, and he wasted no time in breaking open the capsule. As Agent Kalorned explains, it was fate:

Zkillboard values the pod at 3.6 billion isk. Regardless of the isk value, every good citizen of highsec knows that an implant is worthless if it gets popped. 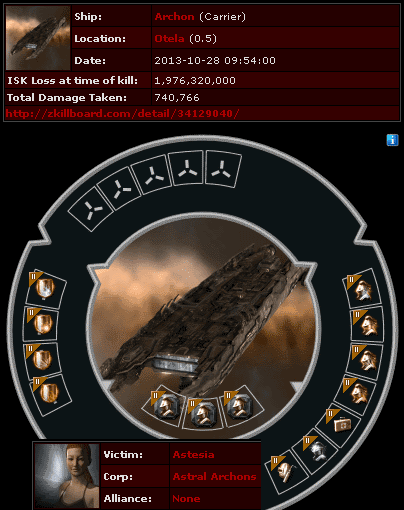 KILLMAIL
Oh, Astesia, what have you done this time? Long-time readers of MinerBumping may remember Astesia from a Kills of the Week article back in April. She'd been attempting to protect some ice miners with a Scorpion, only to get her Scorpion popped. I accused her of being AFK, but in the comments section of the post, she insisted that the kill was a result of her "horribly slow internet connection at the time, involving antennas and stuff". (Yes, that's a direct quote.)

You see, Astesia has long had an ambition to run a giant highsec mining fleet in Otela. At first, things were going well, and miners flocked to her fleet. When ice asteroids were infinite, it made sense for miners to all hang out in one well-protected ice field. But then the New Order came and took it all away. Thanks to our propaganda campaign against infinite highsec ice (and I use the word "propaganda" in its best sense), CCP finally realized that it was bot fuel. So they made ice finite. It no longer made sense for miners to group together (in fact, it's best to spread out, so other miners don't mine the ice out from under you). As the miners scattered, Astesia's dreams were shattered.

Thus, Astesia sought gratification elsewhere. (Attempts to find gratification outside of the Code are always futile pursuits.) Astesia acquired one of the few highsec carriers in existence, an Archon. And started mining with it. 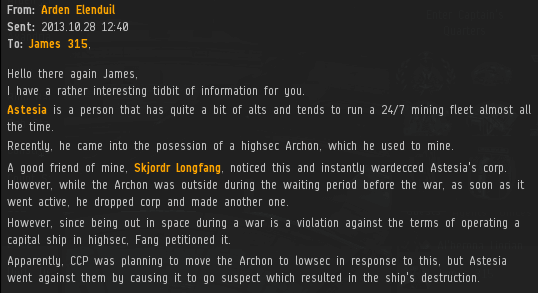 There are conflicting reports about what happened behind the scenes with the petition(s), but what is known is that CCP told Astesia that they would be moving the carrier to lowsec, where it belonged. So Astesia went nuts and deliberately had the Archon go suspect, and invited random locals to destroy it. This TheMittani.com article explains more. Long story short, Astesia felt entitled to have a carrier in highsec, and preferred to see it die rather than go to lowsec. Disgusting.

But enough of that. Friends, if you've read this far, you deserve a special Kills of the Week treat... 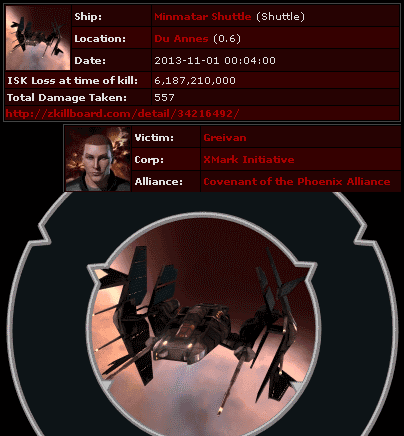 KILLMAIL
Greivan met Agent D400 under very unfortunate circumstances. He was auto-piloting in a Minmatar Shuttle worth over 6 billion isk. Greivan, tell me you didn't do what I think you did.

Oh, Greivan, you did, didn't you? The bot-aspirant attempted to move 10 PLEX without even considering how the New Order might react. Here's a hint: We don't like RMT. D400 received the following EVEmail a few minutes later:

Apparently a "155" is a 155mm artillery projectile. Or something else, I don't know. Greivan may put his faith in 155's, but the best of us put our faith in 315's. Just something for Greivan to think about for the next 10 months, while he's grievin' the loss of his ten RMT'ed PLEX.
Posted by MinerBumping at 03:18