As the New Order continues its ridiculously noble crusade, we find carebears generating ridiculous killmails. Here are some of the more SMH-inducing carebear deaths from the week of November 17th @ 00:00 EVEtime through November 23rd @ 23:59 EVEtime. 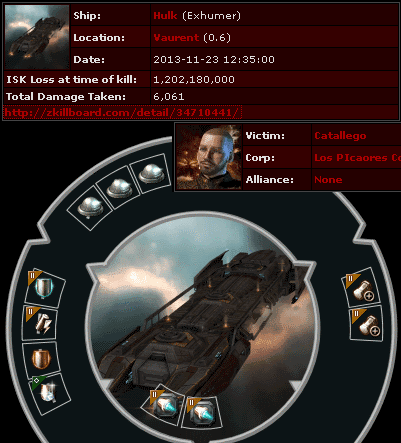 Catallego lost a 1.2 billion isk Hulk when Agents Victor Von Vyvorant and Cholo Dejesus stopped by and reminded him to get Code-compliant. You might look at the screenshot above and think "Wow, that bot-aspirant had a terrible fit. But how did he lose over a billion isk?" Well, the answer is even more absurd than you might think. Behold, the carebear's cargo:

Catallego had three ORE Strip Miners, worth over 900 million isk, in his cargo. He was mining with tech I ice harvesters. That's because the ORE Strip Miners are for ore, not ice. So when Catallego got thirsty for some of that delicious Gallente ice, he just swapped them out, leaving the 900 million isk mods in his cargo instead of a station. Why? I can only assume he felt he was 100% safe in highsec. Disgusting, Catallego. I hope those 8 units of Blue Ice were worth it. 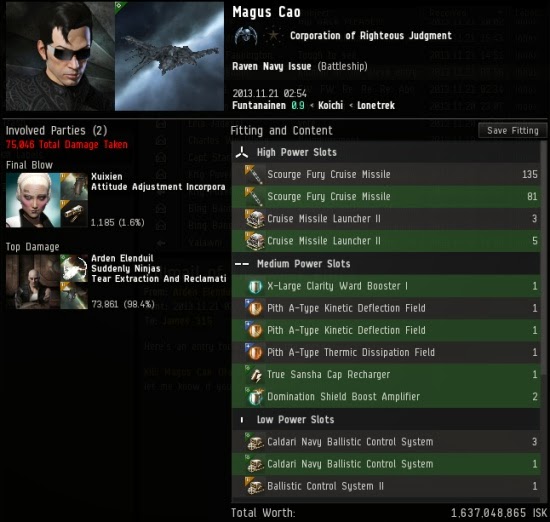 Magus Cao of Corporation of Righteous Judgment learned the true meaning of righteous judgment when Agents Arden Elenduil and Xuixien popped his 1.6 billion isk Raven Navy Issue. How in the world did this happen? Arden explains:


"I was out flying together with Psychotic Monk and some others (total a 7 man fleet or so) while Monk was streaming, and we stumbled across that CNR. Several of us were suspect, but Monk had given my Astero some armor damage because of earlier shenanigans, which is what I think made him target and shoot me."

Magus foolishly took the opportunity to attack Arden's faction frigate, which was suspect. This made combat between the two legal. If Magus thought he could defeat an Agent of the New Order in battle by using a billion and a half worth of battleship, he was sadly mistaken. Psychotic Monk's Twitch stream video, beginning at the 1 hour 24 minute mark, shows the nearly half-hour battle between Arden and Magus. Arden couldn't break the battleship's tank at first, but eventually they brought in an Orca so he could switch out some energy neutralizers and shut down Magus's active tank. Xuixien showed up at the last minute and yoinked the killing blow with 1.6% of the total damage. 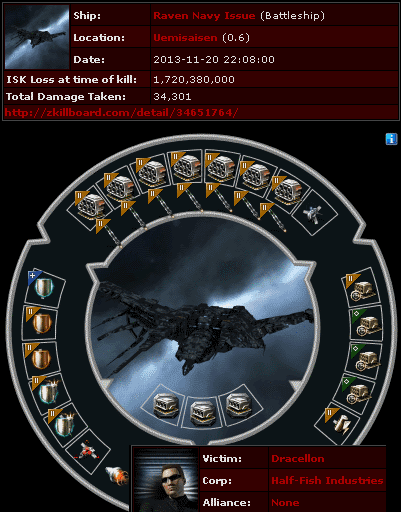 Not to be outdone, Dracellon lost a Raven Navy Issue of his own worth 1.7 billion isk. It was popped by Agents Luck of-The-Irish, D400, loyalanon, chenshar, and Sophia Soprano. Dracellon's crime? According to loyalanon, Dracellon was AFK at the time. Suicide ganking his ship was the only way to get his attention. 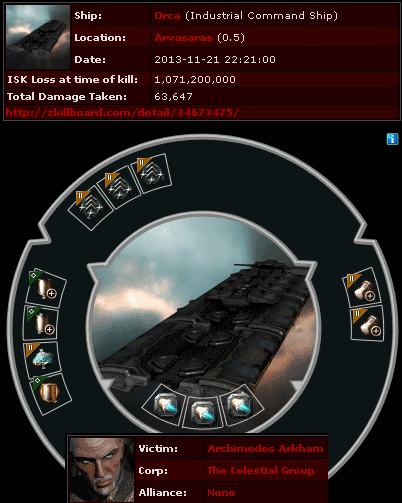 Plenty of Orcas were killed this week. Archimedes Arkham takes the prize with his loss of a billion isk Orca, which was ganked by Agents captain sparro, loyalanon, Karbox Delacroix, D400, Krig Povelli, Sophia Soprano, Eranicus II, merrizon, and Zazz Razzamatazz. The bulk of the extra value on this Orca (before it blew up, that is) came from a Caldari Navy Adaptive Invulnerability Field. It dropped, leaving our Agents 400 million isk richer. That's quite an expensive fig leaf to cover up the carebear's crime of cargo-fitting his ship rather than using all available module slots for tank.

One thing I like about the Orca kill is the list of participants, which you can find broken down by corp/alliance on the Eve-Kill.net link. It's a veritable United Nations of gankdom: Of the 9 gankers, no two are members of the same corp or alliance. The New Order brings all the good people together for a common cause! 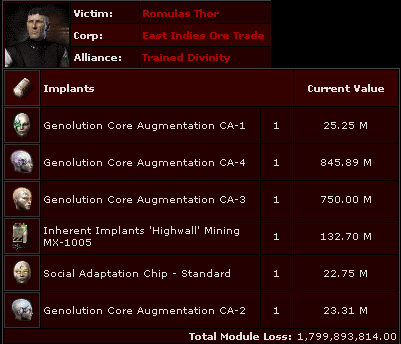 Finally, Romulas Thor lost the Pod of the Week, including 1.8 billion isk worth of implants. Agent Zane Arnolles got the kill. Along with Victor Von Vyvorant, he first popped the carebear's fail-fit Hulk. Quite the collection of Genolution Core Augmentation CA's he used to have there. But no set of implants is complete without an official New Order mining permit. No permit, no implants.
Posted by MinerBumping at 20:05