A Baunty of Bumps, Part 2

Previously, on MinerBumping... An illegal miner named Baunty Brown began selling Catalysts and mining ships in Kamio. Agent MotherSammy happily purchased some Catalysts. But when she saw Baunty didn't have a permit, MotherSammy felt obliged to bump Baunty out of the ore belt. 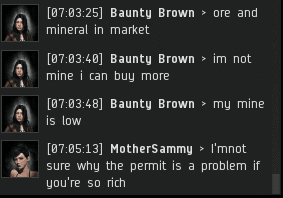 Baunty's broken English was no barrier; she rapidly made her way through the squares of Miner Bingo. Though garbled, she appeared to offer up some version of "I don't need this ice anyway". 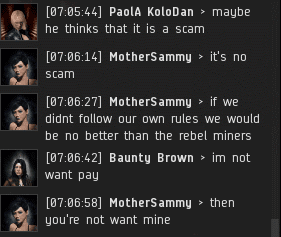 After all this time, there are still some denialists who refuse to believe the New Order doesn't attack licensed miners. However, most rebel miners fully understand they could avoid trouble by buying a permit and obeying the Code. They just don't "want pay". MotherSammy renewed her bumping efforts. Now it was time for Baunty to deploy her new strategy... 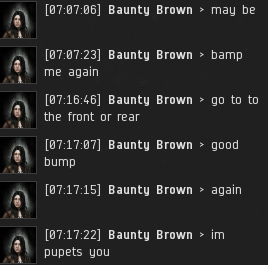 It was reverse psychology. Baunty pretended to want to be bumped. She was a puppetmaster! 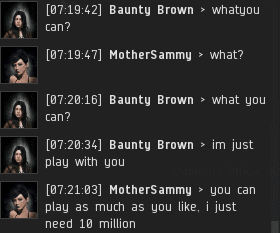 As time wore on, Baunty started to lose faith. The bumps just kept on coming. 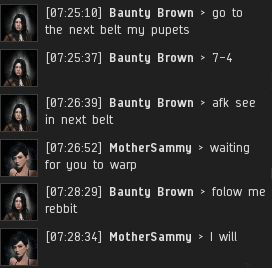 Baunty no longer believed her reverse psychology would work. So she used her puppetmastery to spring a trap. 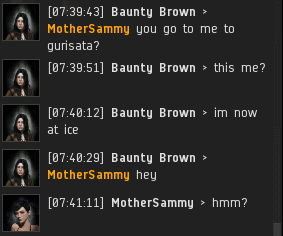 MotherSammy, undaunted, continued to follow Baunty from belt to belt and bump her. Baunty couldn't avoid the bumps, but she hoped to enlist the help of the local NPCs. 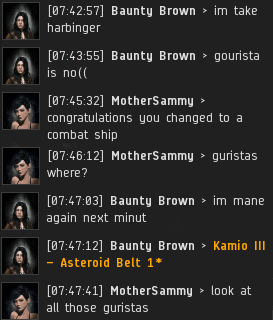 Baunty switched into a battlecruiser and surrounded herself with NPC rats. Would MotherSammy take the bait? 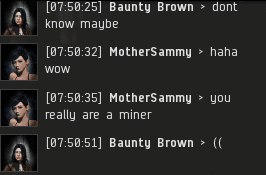 ...Yes, the Agent charged forward without a care for her own safety. It didn't matter though, because her bumping Stabber was invincible that day. The 0.7 security system didn't have strong enough belt rats to defeat her. Baunty was heartbroken. 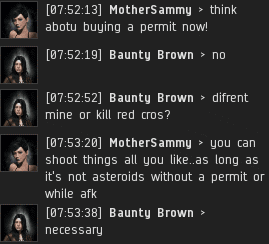 Baunty Brown was thoroughly defeated. She had lost countless mining cycles. Now was a great time to buy a permit and move forward with her life. But she couldn't. So she admitted defeat and ceased mining for the day. 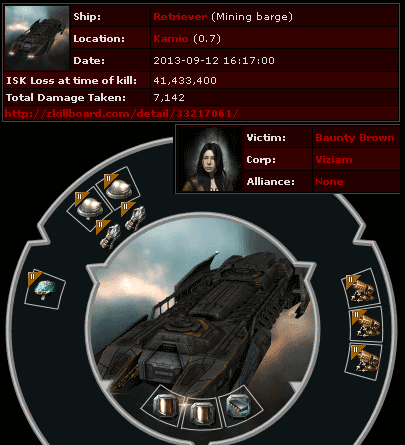 ...Or did she? Baunty's greed got the better of her, and she ventured out into the asteroid belts again about 8 hours later. Fortunately, Agent MotherSammy was just stopping by to check in on Kamio when she saw the carebear relapsing. MotherSammy sighed as she switched into a Catalyst, and she killed the miner.

The Catalysts she'd purchased from Baunty came in handy. An hour later, Baunty was back at it in an identically-fit Retriever. MotherSammy squashed it like a bug. At her wit's end, Baunty decided to take the advice of the rebels who claim that a Procurer can't be killed by the New Order. 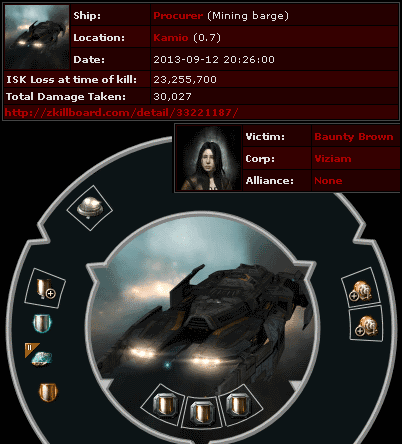 Oops. A few hours later, MotherSammy performed another routine check-up on Baunty and did the unthinkable: She killed Baunty's Procurer.


Being an advanced carebear, Baunty was aware of the existence of kill rights but not so advanced as to know they require activation. She warped into the ice belt in a Harbinger and shot at me. Got herself concordokkened and gave ME a kill right that was then used to shoot down her Procurer.

And so it was that Baunty learned the full extent of the power of the New Order. She'd been willing to spend more than 10 million isk to buy a replacement Retriever. She'd spent more than 10 million on a Procurer and fittings. She'd even been willing to sacrifice far more isk by swapping out yield mods for Warp Core Stabilizers. Baunty Brown couldn't bring herself to buy a permit, though. Without the permit, nothing else mattered. File this one under "G" for "Goofus".
Posted by MinerBumping at 19:50