The Carebear Who Came in from the Cold, Part 1

The New Order's intelligence network is vast. Most of our intel comes from highly-trained, highly-placed Agents all across EVE. Nevertheless, like any other intelligence network, we also allow random people to give us stuff. Stuff which is probably not useful. These people are called "walk-ins".


Duumias Okanata > I have something to share with you
Small Beer > Is it a disease?

A random gentleman initiated a convo with Agent Small Beer. The convo began with a cryptic offer to give him "something". Small Beer was understandably skeptical.

Mercifully, Duumias wasted no time in getting to the point. He linked an archived EVE-O thread from all the way back in March 2013. In the thread, xxBLACK SKULLxx 929 declared himself an enemy of the New Order. 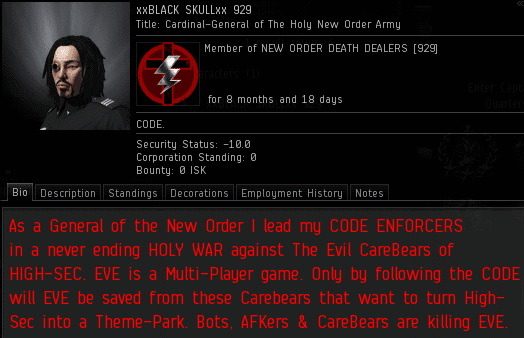 Those unfamiliar with New Order history may find this shocking. It's true: Originally, xxBLACK's NEW ORDER DEATH DEALERS corp was created to attack the New Order. But xxBLACK didn't need to spend much time in the asteroid belts and ice fields of highsec to change his mind. What he saw there was a level of bot-aspirancy that shocked and appalled him. To his amazement, the only good miners were the ones who followed the Code!

xxBLACK SKULLxx 929 knew what he had to do. He vowed to slaughter as many bot-aspirants as he could find, and to force all the miners of highsec to obey the Code. And so the slaughter began. NODD joined CODEdot alliance and, in a matter of months, grew into the most deadly miner-ganking corporation in all EVE. No other group in highsec destroys as many bot-aspirants.

Somehow, Duumias came across xxBLACK's eight month-old post and assumed it was fresh, high-value intel. Who was this guy? Small Beer invited fellow Agent John XIII into the convo to get more answers. 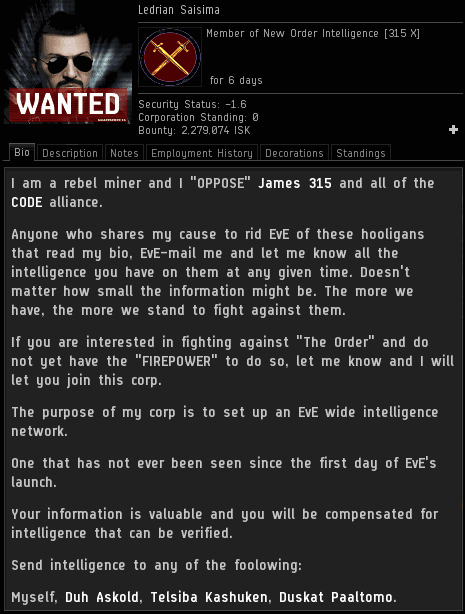 If you don't know who Ledrian is, you've got some reading to do. Several months ago, Ledrian, well... I'll just provide you with the links. Long story short, he was the subject of a rare five-part series on MinerBumping. 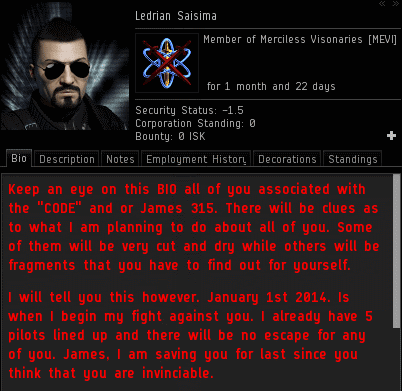 After his defeat at the hands of the New Order, Ledrian briefly retired from the spy game. Then his bio was mysteriously updated with a dire warning about a new anti-Order effort slated to begin on January 1, 2014. As per his request, we kept an eye on his bio for further developments... 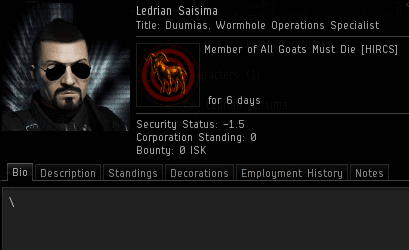 ...But there haven't been any. More recently, Ledrian popped up on the MinerBumping forum, claiming to be reformed and pro-Order.

The world of espionage is known for its shifting allegiances and double-dealing (not to be confused with isk-doubling). Ledrian, the notorious anti-Order spy, was claiming that xxBLACK, a man responsible for the deaths of hundreds of billions of isk worth of bot-aspirants, was a traitor. As rebels are fond of World War II analogies, this would be the equivalent of Tokyo Rose accusing the guys who nuked Hiroshima and Nagasaki of being deep-cover agents for Japan.

It wasn't just the post from March that Ledrian had up his sleeve; he also claimed to have witnessed xxBLACK mining on an alt.


Duumias Okanata > This is not the fiorst time I have seen evidence of him talking against the Order
Small Beer > Sweet mother of St Dominic Savio.
Small Beer > I'm calling James, he has to know about this straight away.
John XIII > hang on
John XIII > let's hear it all first

Ledrian's accusations were dynamite. If xxBLACK were really working for the rebels, anyone could be a traitor. Perhaps even James 315 was a mole. Small Beer wanted to send this information up the chain immediately. John XIII agreed that this was a serious matter, but he wanted to hear more.

Before the day was done, the New Order would never be able to look at itself the same way again.

To be continued...
Posted by MinerBumping at 22:42