The buzz is all over EVE-O. Everyone is talking about it. They're calling it the "Falcon Punch". 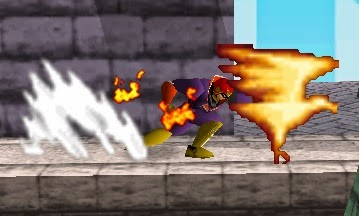 To begin with, a little background info. The New Order's crusade to revive the practice of suicide ganking has been tremendously successful. The carebears have had enough, and they're begging CCP to put a stop to it. The evidence is all over the official EVE forums:

Marathon tear threads have been posted. I've got news for all the carebears who have reached their limit: We're only getting started. We're just getting warmed up! The latest complaint thread, started by Duchess Amarrian, blames CCP for not providing enough protection in highsec. Duchess cried:


"Last night my hauling ship got blown sky high. I was flying a prorator and doing some deliveries. The person that shot me down organised it really well by setting up contracts and sucking in the person accepting the contract. I wont go into detail here. As i was making the delivery and just 1 second from being docked into station my ship got blown sky high. From what ? a minmitar Battleship that was so many km's away. It took 2 people to stop me.

I keep hearing that ccp wil be doing something about this. I've just had enough of it. Seriously I'm trying to find some fun in this game and seeing that the others always have the edge over miners and haulers in high sec is a real joke. I don't mind if it had happened in low sec and null but when your playing by ccp rules to me it seems there are no rules and high sec is really a joke.

At the very least give miners and haulers some big guns like you give others and maybe will balance things well."

The next few pages contained the usual EVE General Discussion fare. But things got interesting when CCP Falcon jumped into the ring:


"Why should CCP provide protection for your haulage in high sec?

CONCORD offer a level of deterrent just the same as any law enforcement agency, but as with any police for they're reactive and punitive rather than proactive.

If you want your haulage to be safer, bring the guns. If you don't have any guns, sacrifice some of your profit margin and hire someone who has them to escort you.

Welcome to New Eden, you just learned a very valuable lesson in being prepared and covering your back.

It was a stunning rebuke--from a CCP developer and community manager, no less! But the carebears weren't going to let up. Quoting Duchess Amarrian's comment that "high sec is really a joke", fellow bot-aspirant Kiandoshia replied, "This, essentially."


"Being unprepared and putting all your eggs in one basket to make a nice juicy target for a suicide gank is the joke here, not highsec.

There are a multitude of ways to protect yourself from suicide gankers, people just automatically assume they're "safe" in highsec, then get annoyed when they lose a ship because of their own lack of spatial awareness."

Sensing the momentum had shifted against them, the carebears rallied and began trotting out the old "gankers have no risk" myth. Syn Shi bitterly complained:


"Gankers have already accepted the fact that they are going to lose a cheap ship. There is no deterrent for them at all. Risk is a myth that CCP keeps preaching hoping some will drink the cool-aid. Only thing left is reward and acceptable losses. Acceptable losses are easily replaced, just buy more plex. Telling new players there is something they can do is just lying to their face and hoping that they believe long enough to buy another plex."

Normally this is where everyone would surrender to the carebears' faulty logic. Not CCP Falcon. Not this time. He wrote back:


"Tell that to all the guys who suicide gank someone, and end up making a heavy loss because everything they wanted to loot gets destroyed in the ship destruction.

By this point, a crowd was forming. Onlookers couldn't believe their eyes as CCP Falcon knocked out one carebear after the next. Yet the whiny miners kept crawling out of the woodwork. Sentient Blade continued preaching the "no risk" myth:


"Risk vs Reward doesn't really apply to gankers ol boy. It's cost vs reward, a straight equation weighted massively towards reward. Risk implies a probability of something happening, which is increased if you're not paying attention. A hauler takes risks. A ganker knows he or she is going to lose their ship, exactly how much it will cost, and a fair approximation of what will drop and be recoverable."

Was CCP Falcon going to let that nonsense slide? Not a chance:


"Because he's prepared himself, done the work and knows exactly what he's doing, how to achieve his objective, and knows the risk if the stuff he wants doesn't drop.

I say fair play to him if he cuts a profit from someone who's half-assed a ship fitting and AFK hauled across space with a sizeable chunk of ISK in their hold.

Honestly, doing that in EVE is like dressing up in red, diving into the ring with a bull and complaining when you spend six weeks in hospital because you got the horns.

This might be internet spaceships, but it's not rocket science to protect yourself and fly with a little common sense."

Ouch! Still, the miners and AFK haulers of highsec had one last card to play. It's the carebear's doomsday weapon: The argument that if CCP doesn't continue to make highsec safer, everyone will leave the game and CCP will go out of business. Showing truly wretched form, carebear Tam Althor threatened CCP Falcon, tell him he'll lose his job if ganking isn't nerfed for the umpteenth time:


"Remember CCP Falcon, the level of protection that concord provides players is the same level of job protection you have when the high sec players decide to quit. Will you survive the next 20% layoff when it happens?"

It was a disgusting comment to make, and so typical of the toxic, entitled carebear attitude. What CCP Falcon said next would go down in EVE-O history:


"I love EVE and the core of what the game stands for. That's why I've been dedicated to it and its community for over 11 years now.

Risk vs Reward is a huge part of that.

Honestly, if that changed, and the game started to soften out and cater to those who want to have their hand held all the way through their gameplay experience, I'd rather not be working on the project regardless of how many subscribers we had, than sell out the core principles that New Eden was built on.

That's a sentiment that I hear a lot around the office, because we are all invested in what makes New Eden so compelling - The dark, gritty, hard reality beneath the pretty ships and nebulas.

EVE is built on the core principle that you are never 100% safe, no matter where you go or what you do. When you interact with another player, you roll the dice on whether they're going to screw you over or not. That's a massive part of the social engineering behind the very basic underpinnings of the EVE Universe.

Sorry, but your scaremongering counter argument makes no sense to me and carries no weight :)" 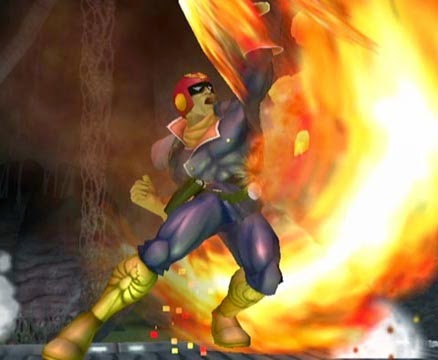 'Twas the Falcon Punch heard 'round the world. You can see it clear as day: the New Order philosophy, grounded in the Code and built upon the foundation of its Saviour's Manifestos. It is alive today, even in the corridors of CCP headquarters. This didn't just happen. We made it happen.


"Suicide ganking has always been possible. Nothing's changed for 11 years. Sorry to burst your bubble, but EVE hasn't changed in this respect." 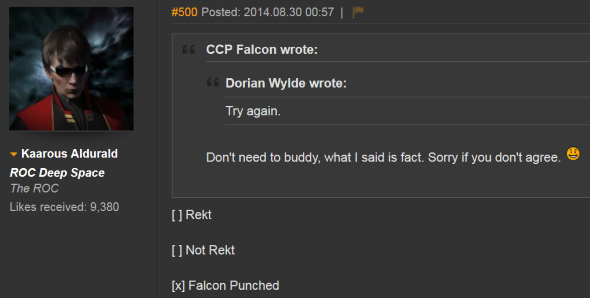 Agents of the New Order, take another victory lap. We're fighting the good fight. We're fighting for the future of highsec and all EVE. And you know what? We're winning.
Posted by MinerBumping at 18:26