One Night in Leremblompes, Part 1

There's an old saying, "You should never judge a book by its cover." However, on the other extreme, it would be silly to withhold all judgment until you've read every last word of a book. Once you've read far enough, you can start to make intelligent judgments about the book as a whole. 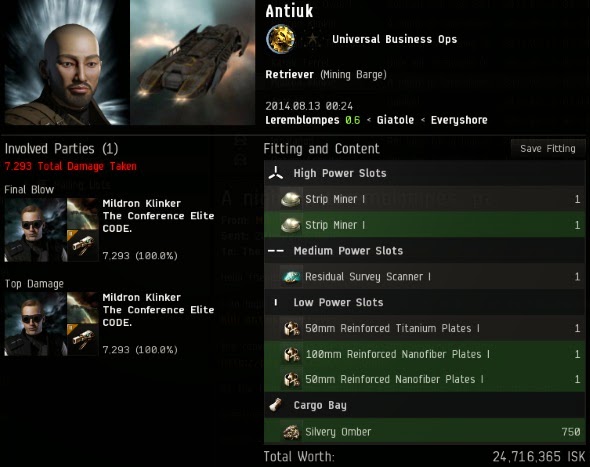 So it is with the miners of highsec. The New Order has dealt with enough miners to be able to draw some sweeping conclusions. For example, when Agent Mildron Klinker encountered Antiuk's fail-fit Retriever, he knew Antiuk was in desperate need of the Code.

Ten minutes after being ganked, Antiuk made a triumphant return to his keyboard. Despite losing his Retriever, he was rather pleased with himself.

Let's return to the subject about judging books by covers. Having seen Antiuk's Retriever fit, and his reaction to being ganked, what conclusions would you draw about him? The length of his EVE career? His corp affiliation, if any? 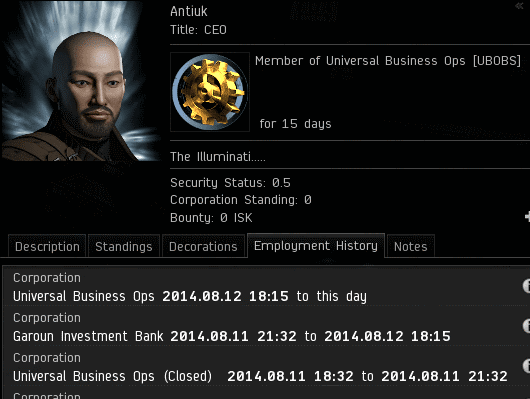 You might be surprised. Antiuk has been playing EVE since 2008. Most of that six-year period has been spent mining in highsec. He is the CEO of a 30-member corp. The lesson to be learned here is that all highsec miners are pretty much the same. Young or old, NPC corp member or CEO, they are all useless apart from the Code.


Antiuk > learn to gonk with style
Antiuk > or go low sec
Antiuk > at least make sure u get the booty
Antiuk > to cover your costs
Mildron Klinker > lol, i actually made a profit :D

Having lost his 1v1 duel with Mildron, Antiuk nevertheless saw fit to give him some advice. Antiuk was a veteran player, after all.

Antiuk has spent many years in the Leremblompes system. Somehow he managed to avoid learning about the New Order and highsec's Saviour. This is why Agents move around so much. If the carebears won't come to us, we will go to them.


Antiuk > well
Antiuk > mildron
Antiuk > 1 month of global kill rights
Antiuk > at 0 cost
Mildron Klinker > Antiuk congrats, no use to anybody :D
Antiuk > except u have 29 days of not being able to fly without being freee ganked
Mildron Klinker > euhm, you want to see my list ? :P
Leo Kovalenski > Mildron Klinker happens to be -10 with a 300M+ bounty... killrights are a poor consolation, sorry Antiuk
Antiuk > But setting it global will make me feel better

Antiuk was forced to admit that he experienced total defeat. But let's be real: Someone willing to spend 6 years mining in highsec is bound to have a high tolerance for pain. He shrugged off the loss and sucked on the pacifier of killrights.


Leo Kovalenski > maybe someone will convince him to "elite PvP" in a Macariel :)
Antiuk > Doubt it
Antiuk > that requires skill :P
Antiuk > and PvPers fight back
Mildron Klinker > hey, are you a player ?
Mildron Klinker > it's called Player vs Player, so, yeah, Elite PVP ;-)
Antiuk > Yeah but pvp means they fight back

The miner was ignorant (or feigned ignorance) about the Code, but he was very up-to-date with the latest in carebear philosophy. He wallowed in self-pitying complaints about gankers shooting people who "can't fight back". Because he was unwilling to fight back, he didn't even consider himself a "player"!


Antiuk > anwyays
Antiuk > Where was my one day reprieve?
Antiuk > Iwasnt excessive mining
Antiuk > - If a miner does not wish to purchase a mining indulgence, he may still be granted a one-day reprieve, if he is able to correctly answer the Supreme Protector's Questions Three.
Antiuk > i didnt get my questions
Antiuk > nor a reperieve
Antiuk > u just came in and gayed it up
Antiuk > read your own rules

At last, Antiuk opened his mind to the joys of the Code. He cited a provision allowing miners to get a 24-hour mining pass if they can answer the Supreme Protector's Questions Three.

Reading the Code is a fine thing, but understanding it is even better. Antiuk felt he was somehow entitled to something, despite the fact that he'd never answered the Supreme Protector's Questions Three.

Now the carebear considered himself an expert in the Code. Everyone knows that if you're stopped by a police officer, you don't lecture him about law enforcement. Nor do you tell him you'll report him to the chief and "have his badge". In New Order territory, Agents of the New Order are even more powerful than police officers. Why would you give them less deference?


Leo Kovalenski > if anyone in this system is not being ganked by Mildron Klinker and would like free max orca bonuses, just let me know.
Irisong Solette > funny thing about hisec...
Irisong Solette > after living in null for a while previously...i feel safer there
Irisong Solette > at least their i know who is out to get me :D
Mildron Klinker > hehehe, i go out there and i hardly meet anybody, in highsec, i meet alot of people, some are happy, some are not, right Antiuk ?
Antiuk > Some of us get raped by u not following your own code of conduct

Every miner has his own favorite Miner Bingo quotes. Antiuk really took a liking to the "You're not following your own CODE" square. His EVE career stood precariously on a razor's edge. One false move and he would slip into the darkness, becoming a space lawyer. Agent Mildron Klinker was determined not to let that happen. He wanted to guide this carebear into a life of Code-compliance. Would Mildron succeed, or would Antiuk only produce more tears?