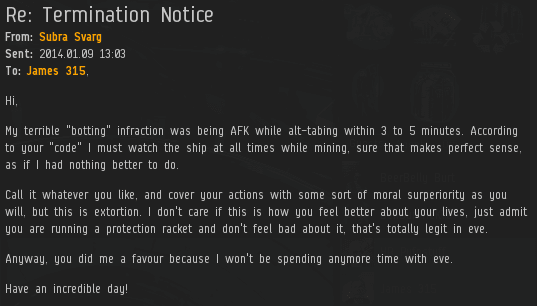 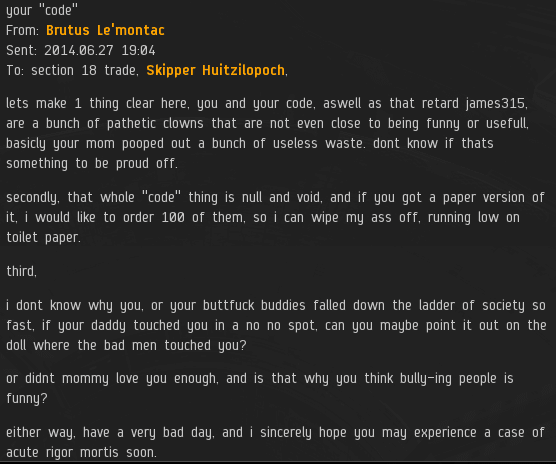 If you serve as an Agent of the New Order, the villains of highsec will treat you as they would treat me. This miner wished for Skipper Huitzilopoch to experience "a case of acute rigor mortis". In-game, of course. In-game rigor mortis. 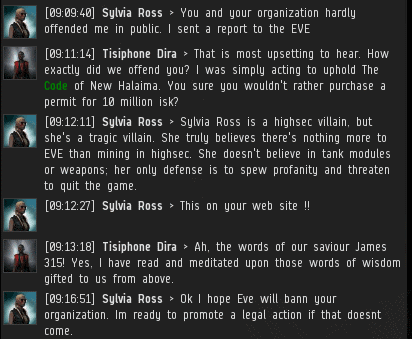 Sylvia Ross was the subject of a recent MinerBumping post after she demanded a safer highsec for her Retriever. Miners like Sylvia complain about getting a "bad edit" on the site. Sorry, but I work with what I'm given.

Knights of the Order don't always get the respect they're due from the carebears they police. The balance is extracted from these carebears by looting their wrecks.

Guess which letter of the alphabet is Commander Koy Bruno's favorite?

Some carebears struggle to warn their fellow bot-aspirants about the presence of New Order Agents in the system... 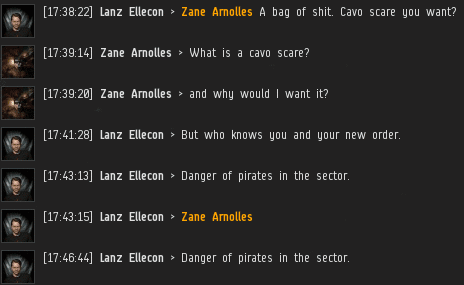 ...But such warnings are not needed. If you're in a 0.5+ security system, an Agent (or multiple Agents) probably isn't far away. 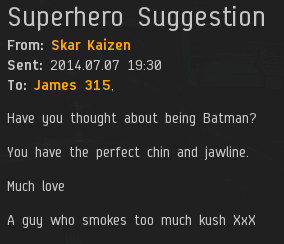 It should come as no surprise that I am often compared to a superhero who works tirelessly to save his city. Agent Alana Charen-Teng beat Skar Kaizen to the Batman comparison: 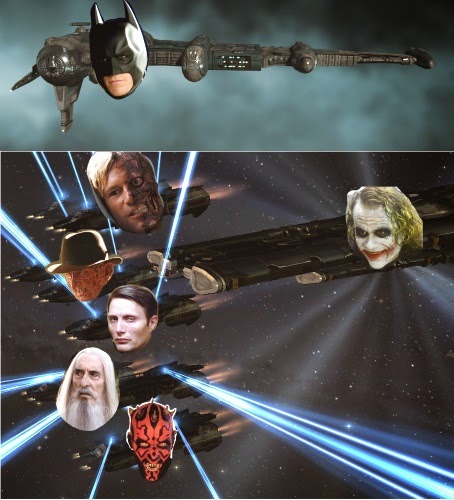 Batman doesn't need any special powers to save the day. He cleans up Gotham by using his courage, his wits, and maybe a little money. Just like our Agents.

The bot-aspirants of highsec operate under all sorts of misconceptions about EVE, and about the New Order. We could tell them they're wrong--but we prefer to prove it by our actions. So far, so good.

Some relationships are constructive. Others are destructive. Xeus Juntu's girlfriend became a modern-day Jezebel or Lady Macbeth when she encouraged her boyfriend to be AFK while mining. Nevertheless, men are responsible for their own actions, so his ship was terminated according to the Code.

Not every miner approves of the Code, but after enough ganks, they'll all obey it. Scronchenhammer Wongbengdong took highsec one step closer to victory when he promised to dock up the next time "nature called". A wise decision. Thanks to our fearless Agents, the Code has a call of its own--and it has even less patience than nature's.
Posted by MinerBumping at 18:31