Being an Agent of the New Order is all about making choices.


jollena Khema > either you replace the ship, cargo drones, and implants or i'll get the ticket going for your banning....... what will it be? 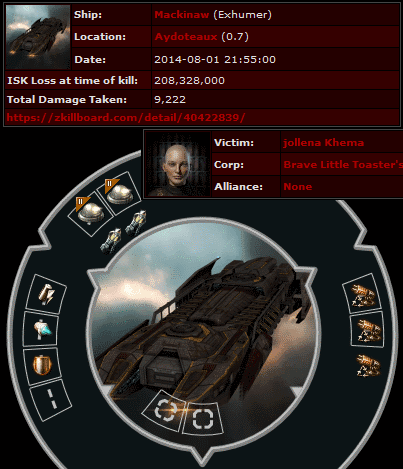 Agents Throatslashar and iZaEaRl launched a daring attack against Code violators in the Aydoteaux system. It paid off, big time: A fail-fit Mackinaw was destroyed. 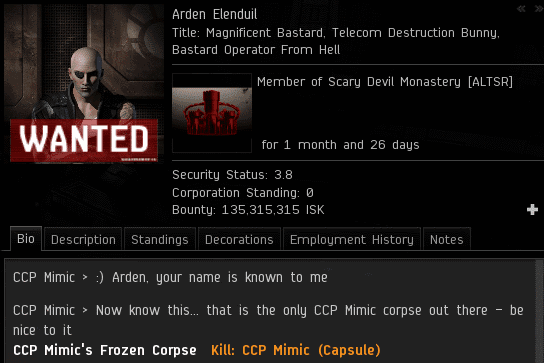 The illegal miner, jollena Khema, had a few tricks up her sleeve. When she threatened to get our heroes banned if they didn't send her isk, the carebear was directed to Agent Arden Elenduil. jollena no longer had a ship, but the PvP had only just begun.

Arden's expert training in dealing with bot-aspirants allowed him to get right to the heart of the matter: jollena opposed all forms of nonconsensual PvP in highsec.


Arden Elenduil > and that is a problem, why?
Arden Elenduil > because in eve online, non consensual pvp is perfectly accepted
jollena Khema > you and your cohorts may have found a bug or loophole to exploit your activities in this game but its one that i'll see closed

According to jollena, suicide ganking is a "bug" or "loophole". It had been used against her Mackinaw, but she wouldn't allow it to be used against any other miner in highsec. At last, she had a cause worth fighting for.

True, the GMs have handled literally thousands of anti-Order petitions. But jollena was confident that she could fix the system. A little too confident. Was she a space lawyer?


jollena Khema > in high sec unless your security status allows it, you've got kill rights, or you've engaged in consentual PvP your safe from being targeted and killed
Arden Elenduil > that, i'm afraid, is where you are wrong
Arden Elenduil > you may ask any developer or GM that question, and they will tell you the same thing
jollena Khema > this wasn't a suicide gank for just being there.......... i was a target because i didn't pay protection money to a rogue group of pirates targeting a specific segment of eve
jollena Khema > all your doing is validating something that'll damage the eve economy

As an Agent of the New Order, Arden is an expert on the ins and outs of highsec combat. Still, he listened politely as jollena lectured him on the rules. It was obvious that jollena had very little knowledge on the subject, yet she was supremely confident that she knew all about it. This served as confirmation that jollena was indeed a space lawyer.


Arden Elenduil > would it have been better if it were completely random, without the so-called "protection money"?
jollena Khema > if it was random i can accept it, but that was all about not paying some rogue group of pirates
Arden Elenduil > you say that we do something that damages the economy, yes?
Arden Elenduil > the more ships that are destroyed, the better
jollena Khema > how can without mining in high sec, people buy the minerals to build ships, equipment, ........

As time went on, jollena developed new theories of space law. In addition to being nonconsensual, ganking miners is illegal if it's non-random, or if it damages the economy.


jollena Khema > paying protection money cuts into my ability to pay for this game without using rl money, also it doesn't prevent them from killing me anyway. read your own propaganda. www.minerbumping.com
jollena Khema > not interested in spin, but i am interested in somebodies destruction.... complete and utter. After that i'm interested in getting what was taken from me illegally back
jollena Khema > the attack wasn't just coincidental, it was calculated and not within general high sec rules for accepted PvP
jollena Khema > accepted pvp is consentual......... this wasn't

The former Mackinaw owner's rantings became more dramatic. Alarm bells started ringing in Arden's head. jollena was showing all the signs of a carebear about to file a frivolous petition.


Arden Elenduil > please don't increase the workload of the GM's by submitting petitions like the one you're planning, it will be rejected
jollena Khema > so you say, the petition is off and in the system
jollena Khema > this isn't being filed for general ganking, 2 noobs taking out a ship because its there. i'm filing it for griefing, your organization griefs specific elements of this game and doesn't even promise them 100% saftey from attack by you.
jollena Khema > i was griefed, and killed because i didn't "buy" a protection permit from your organization
Arden Elenduil > what happened to you was perfectly legal gameplay
jollena Khema > quit spinning something that you cannot win here, i'm a paralegal, and hold a MS from St. Norberts University in wisconsin for Information Security & Cyber Security (that includes specific classes in IT laws).

jollena dropped the hammer. She wasn't just any space lawyer--she was a cyber paralegal. Arden was stunned. With the rest of the Agents handling other crises and no reinforcements in sight, it would be up to Arden to stand alone against this new threat. If he failed, the New Order--and all highsec with it--would be doomed.