One Night in Leremblompes, Part 2

Previously, on MinerBumping... Rebel carebear Antiuk spent six years mining illegally in highsec. Then, just in the nick of time, Agent Mildron Klinker showed up and blasted the miner's Retriever. Offered the chance to get a permit, Antiuk refused on the grounds that Mildron didn't follow his own Code.


Antiuk > I am following the drill
Antiuk > and you didnt follow it
Antiuk > Cos you didnt initiate conversation in local to make sure I wasnt afk farming or didnt want to purchase a permit
Mildron Klinker > i followed my code of conduct, so if you want to complain about it... well, you know the drill
Antiuk > Mildron
Antiuk > kiss my arse
Antiuk > if you had followed your code i would

Despite being one of the mouthier miners Mildron had encountered, Antiuk claimed he would've purchased a permit if only he'd been asked. Attention all miners, past, present, and future: You're being asked right now. Send us your money.

Talking to Antiuk was like talking to a wall. He couldn't get past his anger about Agent Mildron "violating" the Code.


Antiuk > - If a miner does not wish to purchase a mining indulgence, he may still be granted a one-day reprieve, if he is able to correctly answer the Supreme Protector's Questions Three.
Antiuk > i was not granted such
Leo Kovalenski > did you answer all three questions?
Antiuk > i wasnt asked them
Antiuk > i was just blown to smithereens
Mildron Klinker > well, you should have read that BEFORE you started to mine in our saviours Highsec
Antiuk > fuck you

The relationship between Antiuk and Mildron reached its lowest point yet. Most people would give up, assuming Antiuk would never pay for a permit. Mildron cared too much. He knew well the New Order motto, "No miner left behind."

Antiuk continued to fume about not being given the chance to answer the Questions Three. But let's be honest here--what are the odds Antiuk could've gotten those questions right, anyway? He probably thinks the Nile is the largest river in the world.

The argument between the Agent and the non-compliant attracted the attention of everyone in Leremblompes local. This is always a victory for the New Order, as it inevitably brings the Code to the attention of more miners.


Antiuk > oh cos some guy tells him hes their "saviour"
Mildron Klinker > well, somebody has to protect our beloved Highsec and the treasures inside
Oberyn Rodregas > I am starting to think that EVE is some form of social experiment
Antiuk > Listen to what hes saying
Antiuk > Hes a fucking fruitloop
Antiuk > who cant even follow his own code

As Mildron attempted to speak the message of the New Order to more receptive ears, Antiuk tried to poison everyone else against it. What would Antiuk know about the benefits of the Code, anyway? He's never tried to follow it.


Irisong Solette > Antiuk...this is a game...give it a rest please...not like they burned down your house or torched your car while you were driving down the road
Mildron Klinker > I followed the CODE at the letter, you didn't so this is the result: Kill: Antiuk (Retriever) . Get over it, buy a permit and life goes on.
Antiuk > Dude, no one will buiy your "permit"
Irisong Solette > ive seen people with permits
Antiuk > then they are fucking idiots

Antiuk briefly flirted with denialism, claiming no one has ever purchased a permit. It's a little late for carebears to trot out that old lie, though. Even random passersby in Leremblompes knew better.


Mildron Klinker > James 315 is our Supreme Protector
Antiuk > IF A MINER DOES NOT WISH TO PURCHASE
Antiuk > meaning a miner would have to be offered a purchase
Irisong Solette > ok so according to that code...a miner should contact James 315 before mining to get the reprieve...correct?
Antiuk > No basically, if you dont want to purchase a permit
Antiuk > You get asked 3 question within a 24 hour period
Antiuk > you get ganked in 7 minutes
Antiuk > 24 hours = 7 minutes in the saviours eyes
Antiuk > The code should shove itself... up its own arse

As Antiuk went through his objections to the Code, other residents of the system studied the Code and found flaws in his argument. The Code was sound.


Irisong Solette > sorry Antiuk, but your argument doesnt hold any water...
Antiuk > dude
Antiuk > liek i give a shit what u 2 gays say
Antiuk > permits r for fags
Antiuk > Irisong Solette you dont know my argument either so you can take your comment and shoive it up James 315 arse with your cock

The toxicity of the rebel miner always reveals itself. Anyone who didn't agree with Antiuk was assumed to be his enemy. One of the reasons for the lack of organized rebellion in highsec is that the rebels have a difficult time making friends; they prefer to insult one another at the slightest provocation.


Mildron Klinker > Antiuk i still need to ask you to keep local clean please. behave like you are an adult if possible.
Antiuk > And again, I will tell you to go fuck yourself
Antiuk > your not my parent
Antiuk > If your so young Mildron that the word fuck offends y
Antiuk > I suggest getting off the internet
Antiuk > cos I fucked my wife the other day

By this stage of the conversation, Mildron began to prepare himself for the possibility that Antiuk might not be purchasing a permit that day.


Antiuk > PLEASE KEEP CHAT CLEAN THE SAVIOUR WISHES IT
Antiuk > Or if like me, u couldnt give a fuck spurt all the shit you want and corrupt his eyeballs til they melt
Antiuk > Its just funny reading his bullshit
Antiuk > - If a miner does not wish to purchase a mining indulgence, he may still be granted a one-day reprieve, if he is able to correctly answer the Supreme Protector's Questions Three.
Antiuk > BOOM
Antiuk > overwrites his gay ass indulgences
Leo Kovalenski > "MAY" in english this is synonymous with "maybe" or "at his mercy tbh"
Antiuk > Leo last time i read the dictionary it didnt define to "at his mercy tbh"
Antiuk > even gonkers have a code

The consensus in Leremblompes grew: Antiuk had no claim for relief under the Code. He was guilty.


Antiuk > he preaches a code he does not follow
Antiuk > so it doesnt make him right... he should stop preaching shit and go freelance
Leo Kovalenski > i dont care about your loss... i thought about contracting you a retriever from my hangar, but you seem crazy tbh
Antiuk > Dude i replaced my ship
Antiuk > thats not an issue
Antiuk > cos he preaches shit he cant follow
Leo Kovalenski > you seemed so mad
Leo Kovalenski > for so long
Antiuk > its in black and white on his website
Antiuk > Im not mad
Antiuk > why u think i keep pasting that rule.. Why preach his rules that he cant follow? AN amagad praching about a "saviour" over the interwebs

Agent Mildron had responsibilities to attend to elsewhere, so retired from the system. It seemed no permits would be sold to the unruly Antiuk. But the next day he received a convo request. It was from Antiuk. 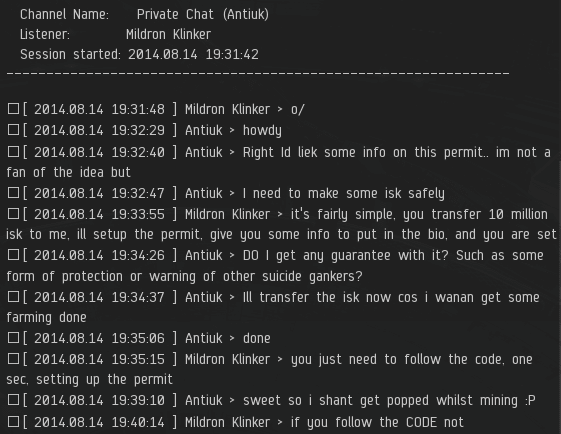 Incredibly, Antiuk had a change of heart. As I've said on so many occasions, the wallets of our Agents are filled with the isk of those who would "never" pay. And I have also said this: The CODE always wins.

There isn't a man, woman, or child in highsec who won't eventually find their way into the New Order family. I noticed that Antiuk does not have a pledge of loyalty to me in his bio, so his journey toward compliance may not be finished yet. But I'm proud of the progress he's made thus far. Aren't you?
Posted by MinerBumping at 19:03