Down the Rabbit Hole

The world is constantly changing. Bot-aspirants crave routine, and so they are unable to adapt in the face of change. The New Order, on the other hand, is all about change.

One fine day, New Order corporation Barge Cleaning Services was doing what it's famous for:

As fate would have it, things would take an interesting turn that day. One of the former owners of an unwanted mining barge engaged in "loose talk":

The talk of wormholes intrigued Agent Nerfbat Aldent. Of course, highsec miners frequently boast about doing things other than mining in highsec. But this was different.

Our hero considered the possibility that some illegal miners might be creating safe havens in unknown wormholes, from which they can launch further mining attacks against highsec. We've seen this happen before, as when rebel miner liberty of U.S.A.T.O retreated into a wormhole to escape Agent Bing Bangboom. (Bing followed liberty to the wormhole and destroyed her entire alliance.)

New Order Agents have long memories. Nerfbat pondered the wormhole question for a few months before the matter came up again. A fellow Barge Cleaner, Agent Killigrew Boirelle, discovered an untanked POS in a wormhole. It was owned by a corp called Nomadic Innovations. The POS showed all the signs of being used as a sanctuary for bot-aspirants. 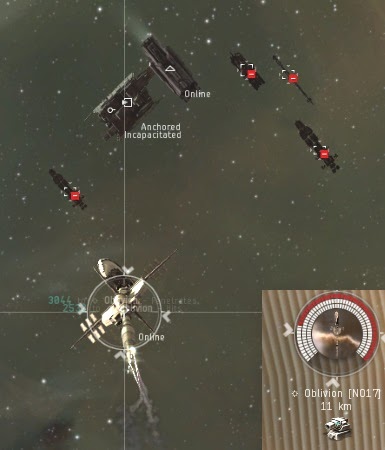 To test his theory, Killigrew put the tower into reinforced mode. Carebears accuse the New Order of not giving people enough warning, but the reinforcement timer offered the POS owners an entire day's worth.

Our heroes joined the Nomadic Innovations corp's public channel. It took them more than 30 minutes just to realize the POS was being attacked. Why? Because they were all busy mining in highsec.

Agent Killigrew urged them to bring a Moros or some other kind of defense fleet to protect the wormhole asset. Killigrew wanted to take something, anything as a sign of good faith, that the POS owners weren't bot-aspirants.

Alas, there was nothing. So when the reinforcement timer ran out the next day, Agents from Barge Cleaning Services returned. The POS was completely undefended by its owners, who were probably AFK in a 0.7 ice anomaly or something. In response, our heroes killed the POS, its corporate hangar array, and its ship maintenance array. 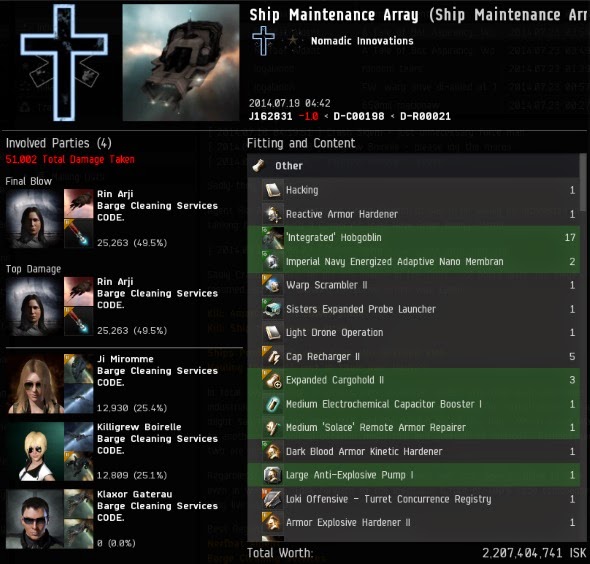 ...Which contained over 2 billion isk worth of ships and supplies. 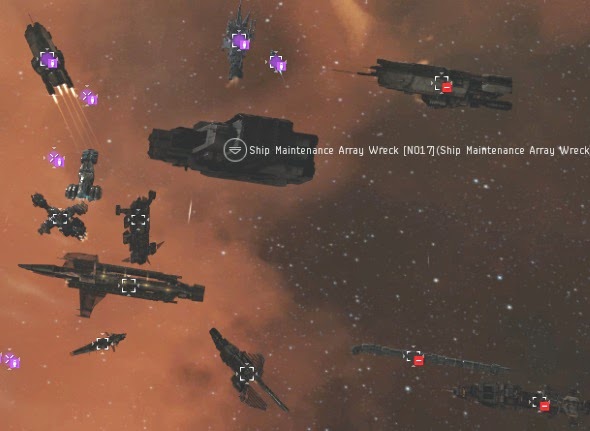 The wrecked ship maintenance array automatically spat out the carebears' ships. One might ask, if Nomadic Innovations did not intend to defend the POS, why didn't they evacuate their assets? It was an act of supreme bot-aspirancy: They didn't want to take any action outside their normal routine, even to save their own stuff. This is the same reason a freighter pilot will gladly lose billions of isk rather than interacting with another player to buy a 10 million isk permit. 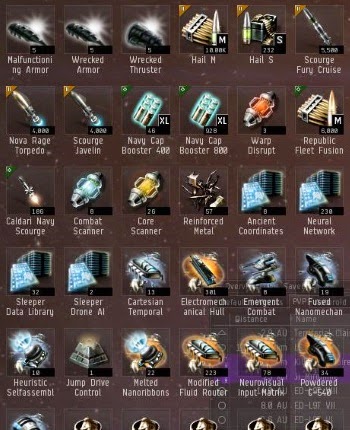 The story had a happy ending. Nomadic Innovations' outrageous misuse of the wormhole came to an end. New Order Agents liberated 2 billion isk worth of ships and equipment, which was repurposed for its proper use: Playing EVE as it is meant to be played.
Posted by MinerBumping at 18:08