Roaches in the Sunlight, Part 2

Previously, on MinerBumping... Alfonse Layate sent EVEmails to CODE.'s gank victims, soliciting funds for a lowsec crusade against the New Order. In reality, Alfonse was an Agent of the New Order--conducting a sting operation designed to catch highsec rebels.

Alfonse caught the rebellious carebears in the act. One such carebear, Leftius Maximus, claimed to be in a corp that "only does PvP". He got himself on the CODE. killboard by "engaging in PvP" on autopilot in an anti-tanked industrial full of blueprints.

As is always the case with money-grubbing bot-aspirants, most were unwilling to part with isk, even for a cause they believed in. However, some of the offenders held enough of a grudge against the Order to pry a few isk loose from their own grubby hands. Money started trickling in.

A miner named TrueVolley secretly donated a billion isk. His hatred burned hot. Who was this miner? 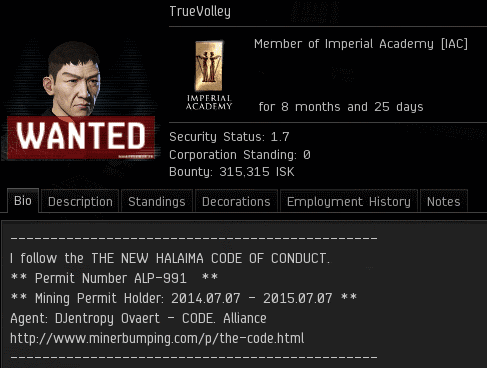 In a shocking twist, TrueVolley was actually a permit-holder! Despite his public declaration of loyalty, he had illegal feelings about the New Order. Alfonse's sting operation was bearing fruit. What an intelligence coup!

TrueVolley's billion isk was promptly put to good use; a thousand New Order shares were purchased in his name. The purchase put him on the month's "Top Supporters" list. This, in turn, drew the attention of Agent DJentropy Ovaert: 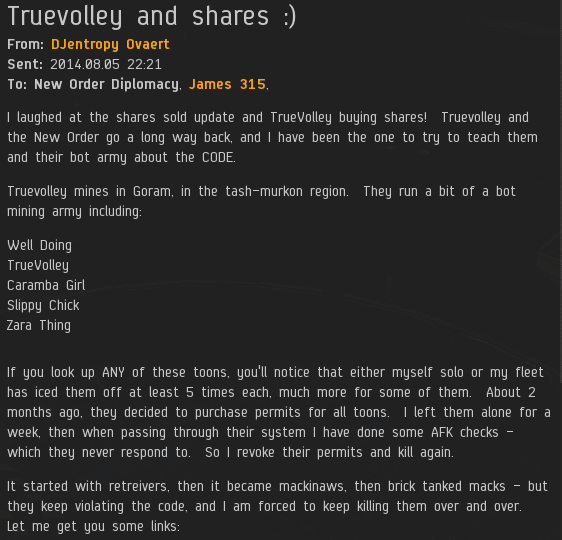 TrueVolley and his army of alts are suspected of botting, and they frequently engage in AFK mining in violation of the Code. Their crimes get them ganked over and over. However, these days, even rebels know the only way to safely mine is to buy a permit. So TrueVolley and his alts keep buying permits. 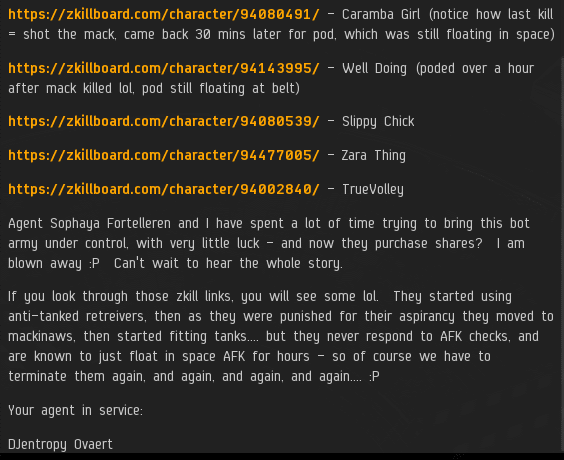 Skeptics and critics will tell you that the New Order only cares about extorting money, and that we'll let botters run rampant as long as they pay their mining fee. Not so. As TrueVolley learned, our Agents uphold the Code and punish the botters, even if they try to bribe us with insincere permit purchases. 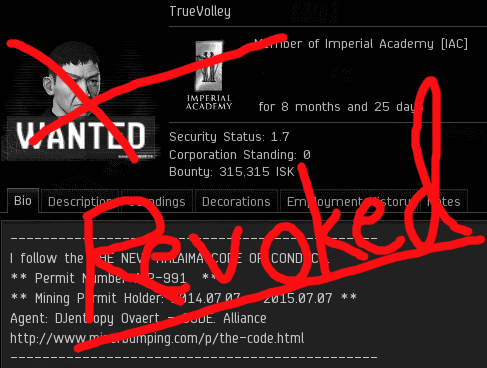 Having attempted to engage in a conspiracy against the Order, the miner/botter only managed to lose a billion isk and get his permits revoked once again. I'd say that qualifies as a victory for the New Order, wouldn't you? Alfonse concluded his report about the sting operation as follows: 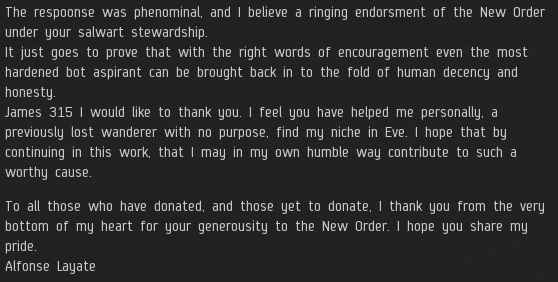 The CIA is known for engraving at its headquarters the words, "And Ye Shall Know the Truth and the Truth Shall Make You Free". Alfonse sought the truth. No matter how many layers of lies the carebears tried to hide it underneath, Alfonse found truth. There are many intelligence operatives working tirelessly for the New Order. They will continue to find the truth, and they will continue to set the carebears free: Free to follow every single word of the Code.
Posted by MinerBumping at 19:44