It is in the paradoxical nature of love that the more you give, the more you have. The Code operates according to a similar principle. This is why the New Order is capable of fighting--and winning--on multiple fronts simultaneously. During the week of August 17th @ 00:00 EVEtime through August 23rd @ 23:59 EVEtime, the New Order achieved strategic victories in the Alliance Tournament while enforcing the Code all over highsec. 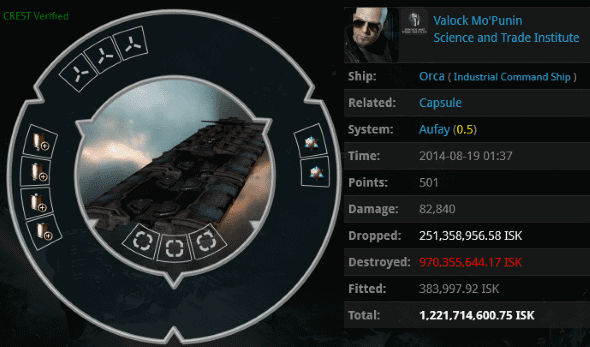 Valock Mo'Punin's 1.2 billion isk Orca contained a mix of tech I shield extenders, an agility tank, and empty rig slots. This was not enough to keep him from being held to account. Interestingly, the Orca contained a transport ship. Maybe Valock should've used the transport ship to transport his goods, intead. The gank was performed by prominent Agents loyalanon and Jerry Rin, who were joined by their friends (mostly from Overload Everything alliance): Voreth Doreign, Demerz, Hair Loss, Le Soltueur, Biggie Kadeyooh, Aronnin, Doomchinchilla, Koz Katral, Gandon Kahler, Douglas Aurelius, Kaydyns, Falopadous, Crazing, and Hynoid. 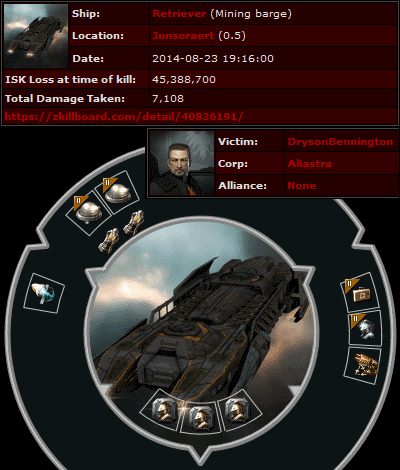 DrysonBennington, known for his belief that the EULA requires CCP to buff freighters and prevent ganks, is well on his way to getting a "DrysonBennington Kill of the Week" feature. Due to his heightened profile, he was forced to add more tank to his Retriever. Yet he couldn't quite resist putting a mining upgrade in a lowslot. The EULA doesn't require buffed freighers, but the Code requires a proper tank and a permit. DrysonBennington was pursued by Agents Mildron Klinker and Zane Arnolles. A 170m pod was also vaporized during the attack. 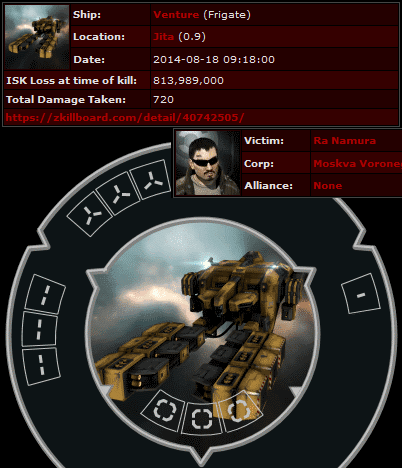 The Venture ganking contest is still active for another week! Ra Namura demonstrated the bot-aspirancy of the whole class of Venture pilots when he lost an empty-fit Venture to Hi There 01. Was this another case of a newbie being "bullied"? 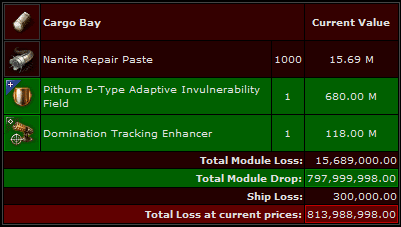 Don't fall for that "new player" stuff. Ra Namura was hiding 800 million isk of cargo in that Venture. 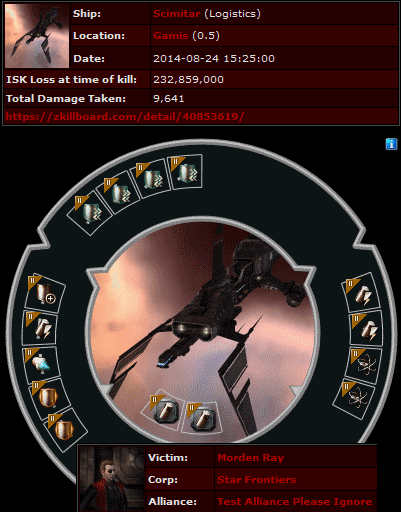 I have said before that highsec is not the nullsec alliances' toilet--it's mine. Morden Ray of TEST Alliance Please Ignore broke faith with the highsec community by encroaching on our territory. He brought a logistics ship to the Gamis system with the intent of protecting carebears. Thank goodness for the Guardians of Gamis, Agents Keraina Talie-Kuo and Krominal. They roasted the Scimitar and continued their vital work. 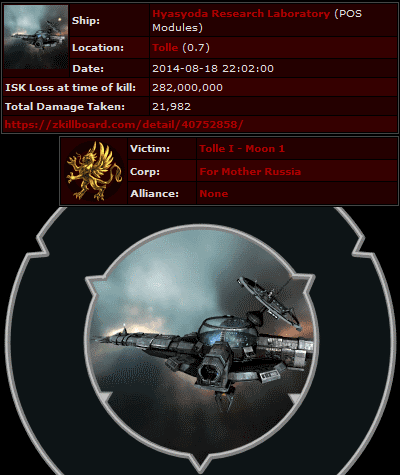 The list of threats to peace in highsec grows by the day. Among the outrages: Unauthorized POSes owned by rebels and other non-compliant entities. In some cases, a POS and/or its components can be expensive. A single Hyasyoda Research Laboratory, seen here, was worth 282 million isk. 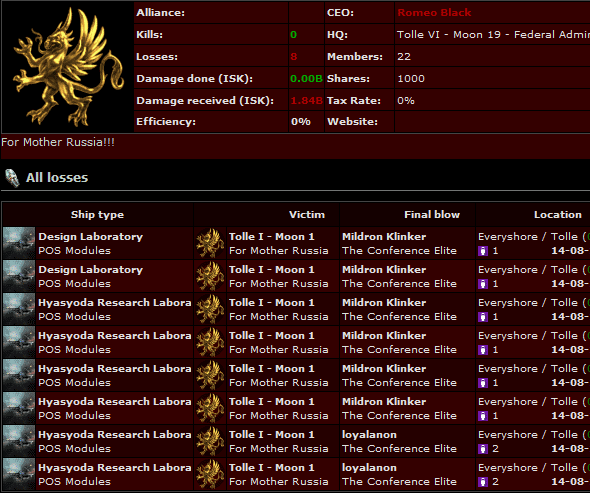 For Mother Russia corp was sanctioned for unspecified Code violations. Agents loyalanon, Sophia Soprano, and Mildron Klinker located a cache of POS equipment in the Tolle system and destroyed it all. Over 1.8 billion isk of damage was inflicted. 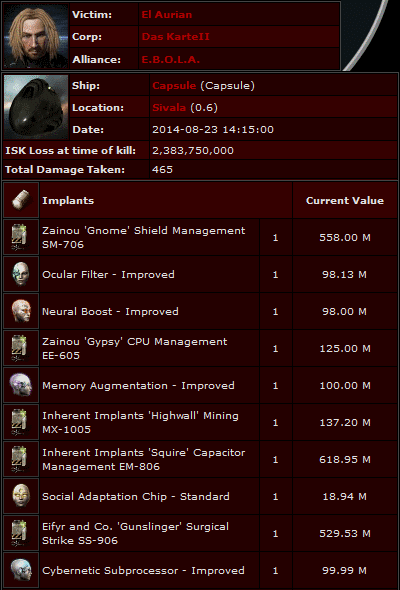 El Aurian of the E.B.O.L.A. alliance had his 2.3 billion isk pod smashed by Agent D400. Ebola has been in the news a lot these days. Truthfully, there's always going to be one virus or another being reported on to sell a bunch of newspapers. But it's not the exotic diseases you need to worry about; it's the mundane things that do the most harm. For example, bot-aspirancy and carebearism. They might not make for flashy headlines, but they're incredibly dangerous. Luckily there is a cure: the Code. If you refuse to accept the Code, we've got plenty of qualified professionals patrolling highsec, ready to give you a good dose of it.
Posted by MinerBumping at 21:45