Miners, if there's a blog that needs sixty-one editions (and counting) just to highlight a sampling of your miscellaneous tears, you might be doing something wrong. Check the Code to make sure you're following all the instructions. As for the rest of you, welcome to the latest from the Grab Bag! 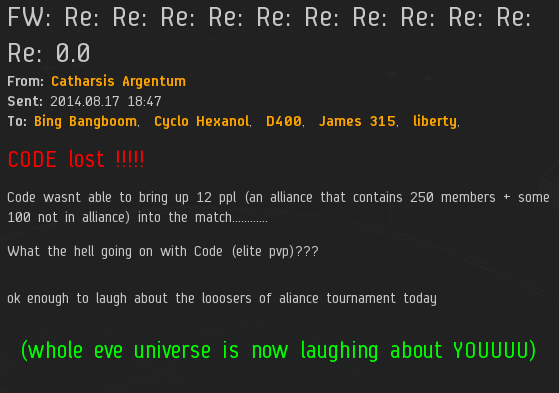 Shortly after the Alliance Tournament match, an anti-Order rebel sent an EVEmail to me and some random people, including liberty. The rebel should've held off writing until the next day, when MinerBumping revealed that in fact CODEdot won the Alliance Tournament. This is why it's so important not to rush to judgment. Wait until all the facts come in.

Konrad Grunberg insisted he wasn't guilty of illegal mining. He wasn't mining in the asteroid belt; he was just sitting there "doing his own thing". As if the Code permits loitering in highsec! 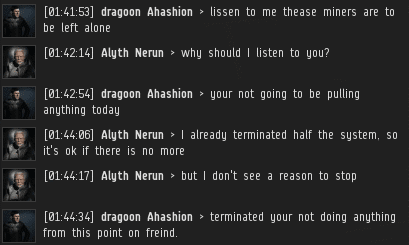 dragoon Ahashion warned Agent Alyth Nerun that the New Order wouldn't be allowed to do any more ganking in the Abudban system. 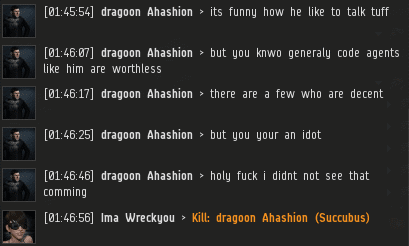 dragoon was mistaken. Never listen to the rebels' predictions. Trust our Agents. They're the experts. 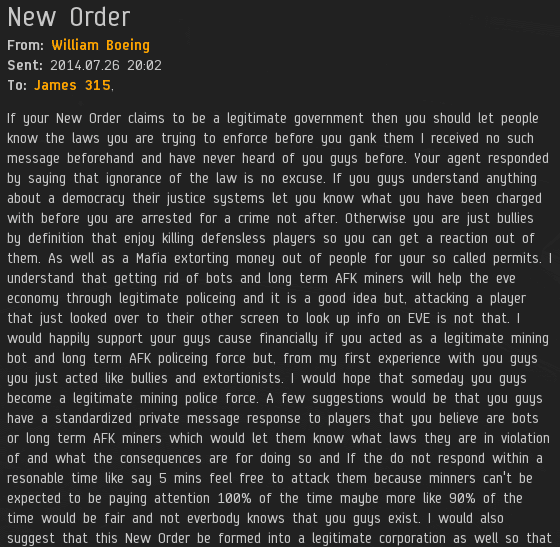 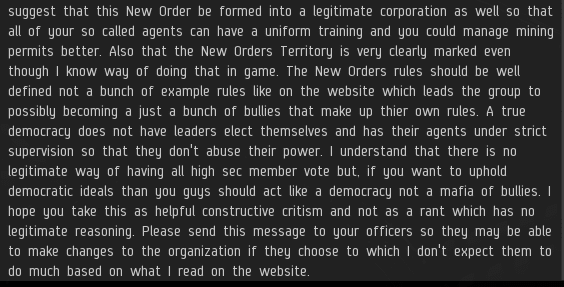 After carefully skimming William's first EVEmail, I shuddered when I saw a second EVEmail from him in my inbox. He had more to say in part two?

This is a classic intercept from the "secret" Anti-Ganking channel. I feel sympathy for our faithful operatives who monitor that place. You need a hazmat suit to spy on a community that toxic.

Vyhul Mi was dissatisfied with the way he was treated by Agent loyalanon in-game, so he requested a house call.

Like so many other carebears, Vyhul was frustrated by his inability to do real-life PvP to defend the honour of his lost ship--in this case a Helios and Capsule. For some reason, carebears are convinced that their kill-to-death ratio would be improved if they could only punch someone's lights out. Every highsec miner has powerful friends in nullsec, they're all doing important things on their main, and they're all martial arts experts IRL.

Agents of the New Order never back down from a fight. loyalanon gave Vyhul the street address of his personal residence in Somalia. (No town or city was provided, because there are few Smith Streets in Somalia.) For some reason, Vyhul chose not to spring for a plane ticket that day. Maybe they'll meet up at Fanfest and become great friends.

You know what the sad thing is? By concluding with "have a nice day", Ding Woot's ominous-sounding EVEmail became one of the more polite pieces of correspondence sent by a highsec miner lately.
Posted by MinerBumping at 18:49