Finding a good corp to join can be tricky for new EVE players. There are so many pilots out there with so many skillpoints, corp recruiters can get away with requirements like, "You must have 10m SP to join" or "You must have 30m SP to join". Where can a brand-new player find a home? Where can newbros meet some friends and learn how to play the game? The New Order, that's where. 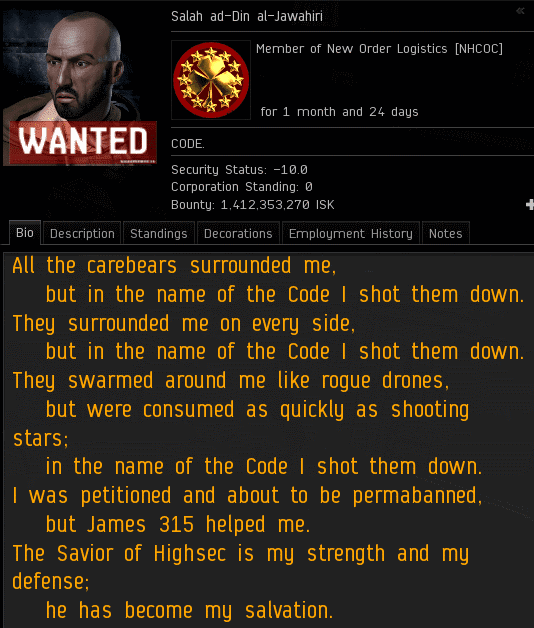 A disenfranchised young newbie with few opportunities in this high-skillpoint economy, Salah ad-Din al-Jawahiri heard about the fight for highsec and applied to New Order Logistics. Before long, he was making history.

As a new player, Agent Salah had a special affinity for those highsec residents who were just beginning their EVE careers. He became like their big brother. I don't know why the term "big brother" has such a negative connotation. 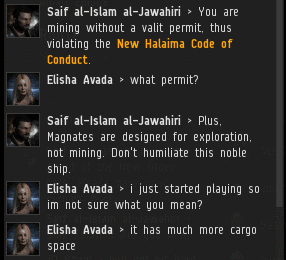 Salah's scouting alt, Saif al-Islam al-Jawahiri, came across a 7 day-old character mining ore in a Magnate-class frigate. Which is ridiculous. Said newbie, Elisha Avada, chose the ship because it has a larger cargo bay than a Venture does. She didn't know anything about ore bays. 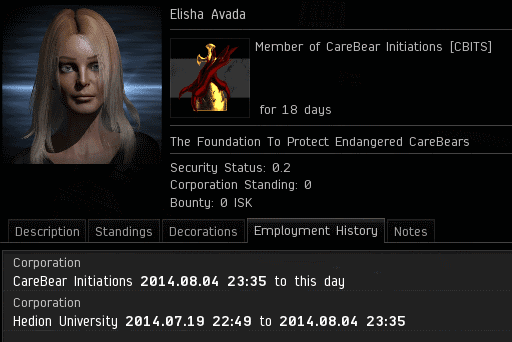 Salah understood that Elisha was acting out of ignorance. However, he also knew that Elisha was setting a bad example for others: A carebear should not be seen in public mining with a Magnate. He admonished her. 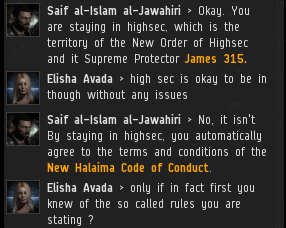 I don't know where she got this idea, but somehow Elisha thought highsec was a place where people can do whatever they want, "without any issues". Agent Salah instructed the miner that she was required to obey the Code. 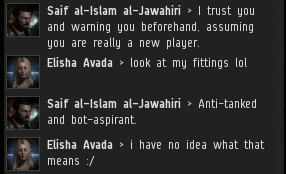 Note the compassion shown by our Agent. He was authorized to shoot the carebear on sight, but because she was a newie, he gave her a warning. He even told her what to do and how to play the game. What a guy! Salah ad-Din was one chivalrous knight. 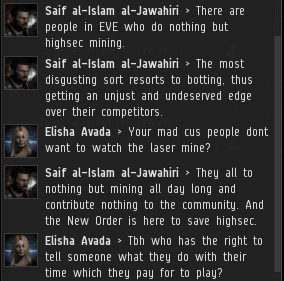 You gotta get 'em young. Cigarette companies know this. The New Order knows it, too. Only seven days into the game, Elisha's head was already filled with all sorts of nonsense. She felt she was entitled to mine AFK and disregard the Code. If only an Agent had gotten to her sooner. 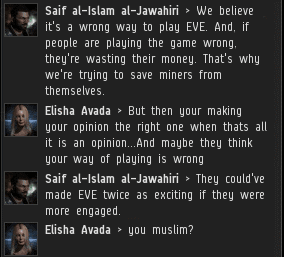 Salah shared his beliefs with the miner. And he hoped, for Elisha's sake, that he was getting through to her. 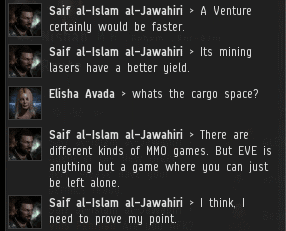 The New Order is nothing if not persistent. If one route is blocked, we'll find another one. The rational approach wasn't working for Salah. Elisha wasn't interested in the Code's logic. It was time for another approach. 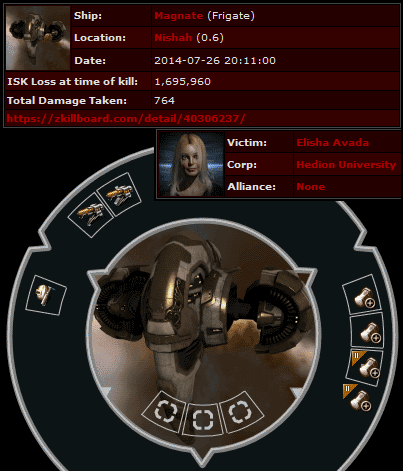 Using Saif as a warp-in, Salah dropped his ganker on the mining Magnate and successfully destroyed it. Salah was a new ganker with few skillpoints, but New Order fighters punch above their weight. Absolute faith in the cause and total fearlessness make for a potent combination. Elisha's quadruple-anti-tanked frigate and a hull repairer(!) were no match for him.* 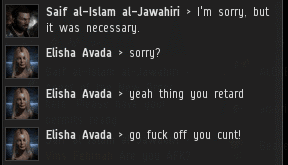 Salah anticipated that the gank might be misinterpreted as a hostile act. But before he could explain himself, Elisha let loose. 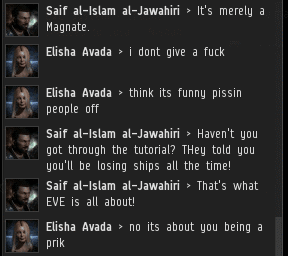 The carebear refused to see the bigger picture. She only cared about holding onto her possessions. The integrity of the game was of no importance to the greedy young bot-aspirant. 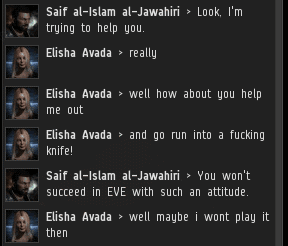 Elisha never considered how her refusal to obey the Code might be damaging the highsec community. Talk about tunnel vision! Although Salah wasn't able to rescue Elisha that day, he was able to inflict some isk damage against the carebear. Taking away a miner's stuff is almost as good as teaching them. Pleased, Salah prepared himself for his next mission. This was a success that he could build upon.
Posted by MinerBumping at 21:10