Venturing for a Venture, Part 2

Previously, on MinerBumping... Agent Kalorned was left with no choice but to kill a one month-old Venture pilot who took 4 minutes to respond in local. When the miner returned to his keyboard, he refused to purchase a permit. Alarmed, Kalorned conducted an interview--with this terrifying result: 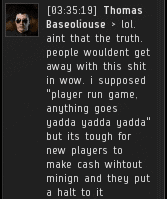 It was precisely what our Agent feared: The "new player", Thomas Baseoliouse, had tracked in the dirt of his theme park attitude from another video game. EVE was under siege.

Our Agents are known for their artful segues. They can steer a conversation toward the Code or MinerBumping like nobody's business. This was an emergency, so Kalorned went straight for the URL. And he still managed a smooth transition!

The theme-park-ism was deeply ingrained in this miner. Like a World of Warcraft player who marvels at the graphics and user interface, he only looked at the surface of MinerBumping. He cared little for its content. Imagine if people judged EVE that way! 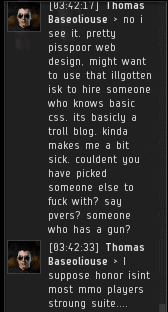 In a few breezy lines, Thomas dismissed literally hundreds of MinerBumping posts. Not to mention the Code page. Kalorned was floored. 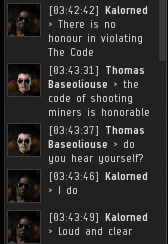 The gulf between the two was staggering. And yet, Kalorned's mission remained the same: No miner left behind. He would reach this carebear.

The greatest challenge you'll ever face in EVE is trying to teach a carebear who doesn't want to be taught. Thomas resisted. 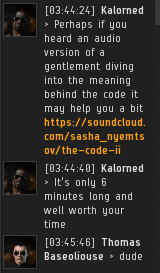 Some learn best by hearing, others by seeing and reading, still others by doing. Kalorned tried every trick in the book to get Thomas interested in the Code. Nothing seemed to work.

At times, it seemed the young miner was actually moving backward. Once again, he began to view the New Order through the prism of money, since money is the only thing a carebear ever thinks about. He totally forgot that no one makes a profit by killing Ventures. 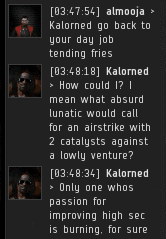 Kalorned introduced Thomas to the world of emergent gameplay. EVE was so much more than an isk-collection "game" for AFK'ers. There were greater, higher purposes available for those who would take them on.

The more Thomas learned about the New Order and its Code, the more he was repulsed by it. When he saw the list of shareholders, he was disgusted. He'd assumed Kalorned was the only Agent. Now he felt the entire EVE community was rotten to its core. Because highsec wasn't 100% safe.

Though Thomas was unwilling to purchase a permit and pledge loyalty to me on this occasion, Kalorned saw hope in the carebear's future. 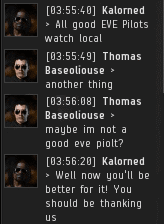 It was just a glimmer--so fleeting you'd almost miss it--but it was there.

You know, it's easy to look at the bot-aspirant savages and write them all off as trash. Most EVE players do. They see highsec carebears as filth, scum, not worth saving. The New Order knows better. We care about everyone in highsec, no matter how worthless and pathetic they might seem to the untrained eye (or even the highly-trained eye). Because we see the same glimmer that Kalorned saw in Thomas. We have hope. And as a result, highsec has a future today.
Posted by MinerBumping at 18:36