The New Order is no stranger to teamwork. We know that together, we are much more powerful than we would be alone (though even alone we're extraordinarily powerful). Consider, for instance, CODEdot's history-making Alliance Tournament team. Or the team effort employed in rescuing a young highsec miner named The Feet.

Agent Salah ad-Din al-Jawahiri and his fellow Knights were hard at work, patrolling highsec. Then they found The Feet. (Salah's recommended sound track for today's episode was a link on YouTube for Mendelssohn's Symphony No. 4 'Italian', performed by the Chamber Orchestra of Europe (COE, not to be confused with CODE.).) 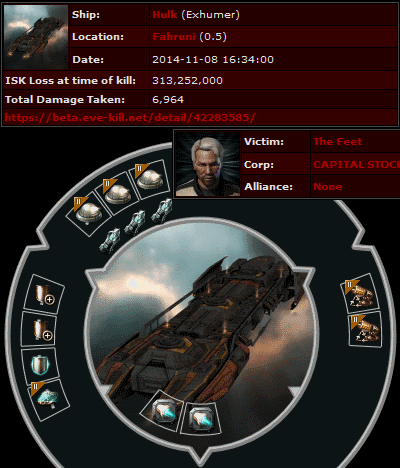 The Feet was ganked by Agents Gallie Crendraven and Gohman Patrouette. As you can see, The Feet was flying an illegal Hulk, which was not tanked to New Order specifications. The Feet also lost his 177 million isk pod, for a total of about half a billion isk lost.

Gallie and Gohman had made a lot of assumptions. They assumed the Code would be victorious. They also assumed The Feet was just a typical young carebear embarking on a path to bot-aspirancy. However, The Feet's bio warned them against making any assumptions. Our gallant gankers therefore decided to forward The Feet to the New Order "Behaviour Correction Department".

Before interviewing The Feet, they asked him if he had any questions of his own. He did.

Agent www lawofhighsec com hardly began her explanation when she was met by four more rapid-fire questions from the miner. Obviously The Feet needed more help than the average carebear, so additional Agents were invited to the channel. 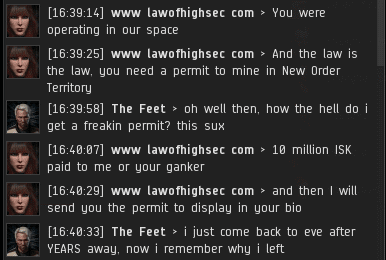 Remember what The Feet's bio said about assumptions? The young carebear was no proper newbie. He began mining in highsec over seven years ago. Now he was back, awakening to find himself in a new era of highsec--the New Order era. So much had changed. 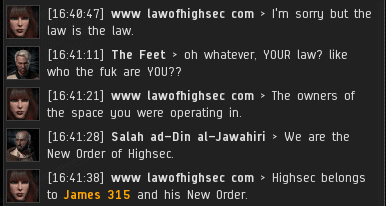 Ownership of empire space had changed hands while The Feet was away. The torch was passed from total anarchy to James 315. Most people are very happy with the new government. I'm flattered.

The Feet managed to be a bittervet and a highsec carebear, all in one. Unfortunately, he chose to express his feelings in an inappropriate way.

Each Agent draws upon the power of the EVE Terms of Service in a different way. Agent www lawofhighsec com, for example, petitions those who use abusive language. Others never petition anything. Regardless, it's best to follow the Code, which requires miners to speak politely.

Immediately after The Feet left the convo, another ganked miner was invited to the channel. Like something out of a Monty Python sketch, he insisted he was fine.

The matter of The Feet remained unresolved. Maybe The Feet would have disappeared into the mists of obscurity, were it not for New Order teamwork. Agent Tisiphone Dira found him! 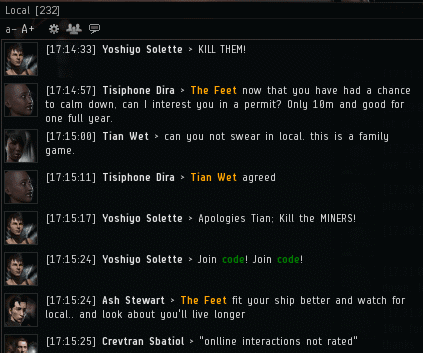 As I said, much has changed in highsec. Hek is a New Order stronghold, and local was filled with random players encouraging The Feet to follow the Code. Would peer pressure encourage The Feet to buy a permit at last? Or would he continue to rebel against modern culture and get left behind?