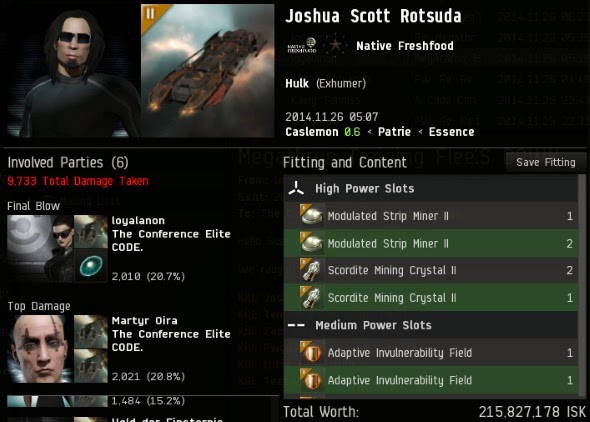 Just another dead Hulk, killed for failing to obey the Code. The usual, right? 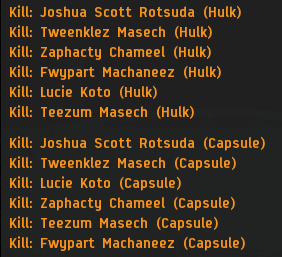 Our Agents are always at the cutting edge of developments in anti-carebear tactics and technology. When a very compact group of Hulks was spotted, it provided an opportunity for our Agents to test out their smartbombs. It never hurts to add another technique to our arsenal. 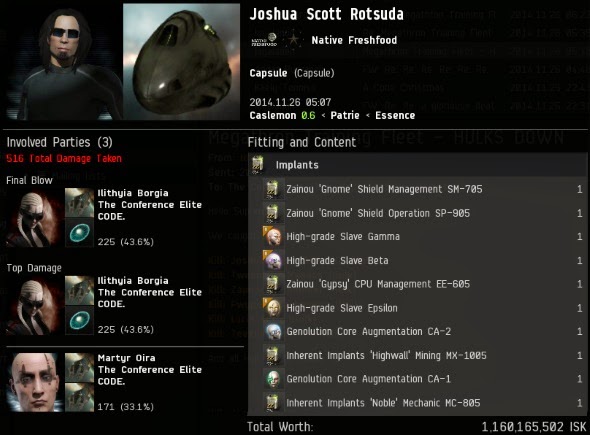 As luck would have it, the Hulks contained implant-rich pods. This was unfortunate for the miners, since all the pods popped. 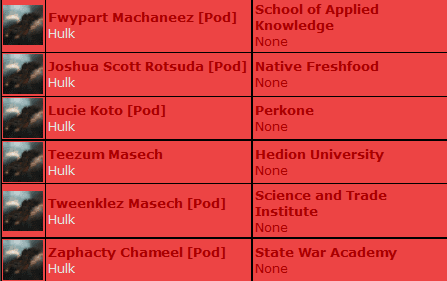 The miners belonged to a single player. Fwydatt Masech initiated a private convo with Agent Ilithyia, demanding an explanation.

Fwydatt was hostile right from the start. He leveled an outrageous accusation against our Agents: He believed the only reason they knew how much damage to apply to his semi-tanked Hulks was by cheating. Could the destruction of these miners become the next t20 scandal?

Ilithyia explained that the Agents' goal wasn't to spend as little isk as possible, but to enforce the Code. Fwydatt claimed not to know about the Code--despite having spent the last three and a half years of his life mining in highsec.

Although he'd supposedly never read the Code or heard of the New Order before, Fwydatt was confident that he was in full compliance. Typical miner.

Ilithyia soon realized Fwydatt was the kind of miner who likes to escalate things as quickly as possible. Fwydatt immediately threatened to quit the game. If he's really spending $150 per month to mine in highsec, quitting might not be the worst thing. However, since every EVE player's primary goal these days is to maximize CCP's subscription revenue, we're not supposed to entertain such thoughts.

Fwydatt insisted multiboxing miners in highsec is a great way to relax and relieve stress. This surprised Ilithyia, because Fwydatt didn't seem very relaxed. Personally, I'd say going to the movies is a better way to relax. I've found highsec miners to be in a state of perpetual agitation.

In the context of a conflict with the Barbary pirates, Americans had a similar saying: "Millions for defense, but not one cent for tribute." They ended up paying the pirates. Eventually, the miners always pay, too. (We're not pirates, though.)

Indeed, Fwydatt's mining fleet "sank"--in all directions, at high speed--and he believed this was harassment. The miner who kept to himself and didn't know about the Code, but he parroted the "Ganking Is Bullying" nonsense instinctively. For some reason, he thought Ilithyia claimed to have insider info. Fwydatt was the source of his own conspiracy theory, and now he imagined he'd gotten it confirmed by the ganker.

From a certain perspective, Fwydatt seemed like a hopeless case. He saw conspiracies everywhere, felt bullied, refused to pay anything for his mining privileges, and threatened to quit the game. Was it impossible to convince Fwydatt to obey the Code? Some would say so. Yet our Agents do the impossible every day. Ilithyia was determined to make this miner see reason. Would she succeed? Or would everyone's accounts get "jaked" for cheating?