Some critics call the New Order a bunch of "tear harvesters", as though our goal is to make carebears cry. I find this accusation amusing. It's like saying a personal trainer's goal is to make his client's muscles sore. The New Order's objective is to save highsec, including the carebears. We're here to pump them up, to make them stronger. If, in the process, they shed some tears, that's a side effect also associated with the victims of nullsec conquests. But I will admit that the carebears cry more. Luckily, we've got Grab Bags. 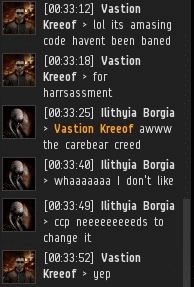 For nearly two and a half years, the New Order has swept, unchecked, across highsec. Carebears haven't given up on the idea that we're violating the EULA. They merely assume CCP is very slow to catch on.

At the heart of bot-aspirancy: The idea that no player can impose anything on another player in highsec. They believe anarchy is mandatory. 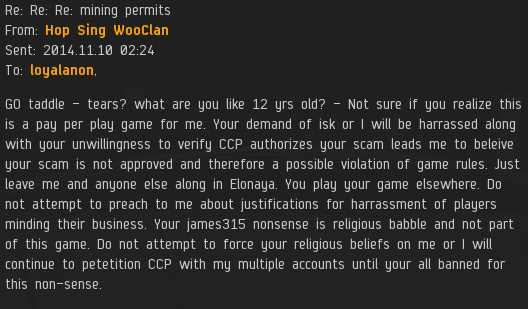 Of course, it's silly of the bot-aspirants to object to the New Order and its ideals. The carebear has no ideals--or ideas--of his own, so why not adopt ours, and live? 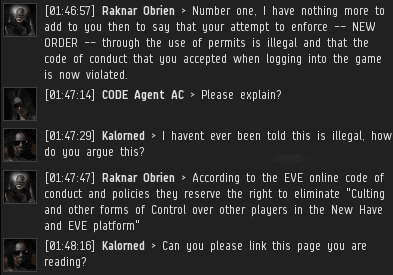 Carebear Raknar Obrien came to our Agents with a disturbing report: The New Order is against a provision in the EULA. The provision clearly states that "culting" is forbidden "in the New Have and EVE platform". A citation was needed.

Unfortunately, Raknar disappeared before our Agents could obtain a copy of his extraordinary document. 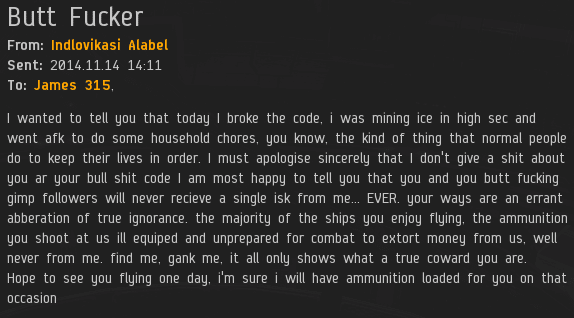 I know what people say about judging a book by its cover, but I have yet to read a pleasant EVEmail with "Butt Fucker" in the subject line.

Mick has a "buddy" with a titan. In one "blast," it can destroy an entire corporation. It must be nice to have buddies in high places!

Ketsuo Rotsuda was AFK autopiloting in his pod through my territory. He was promptly ganked. At least he had the balls to AFK autopilot solo. Unlike all those pods who travel in groups. What do you call a pack of pods, anyway? A pod pod?

Actually, Agent Piir8 does engage in a lot of solo PvP. Maybe Ketsuo doesn't consider it "solo" if you've got the full power of the Code behind you. 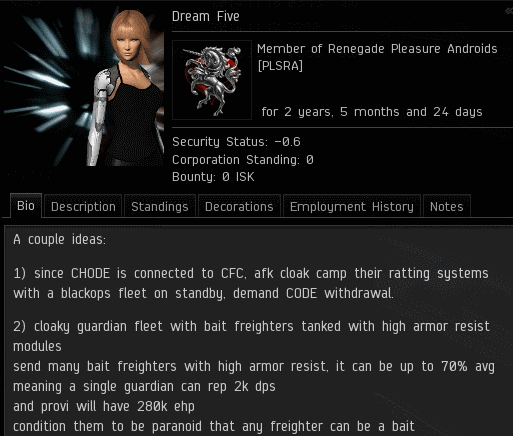 I told you all when we first encountered her, that Dream Five was special. She doesn't give up. And yet, maybe she's softening her anti-Order stance a bit. Don't be shocked if one day you see Dream Five trade in her freighter business for a little freighter ganking. 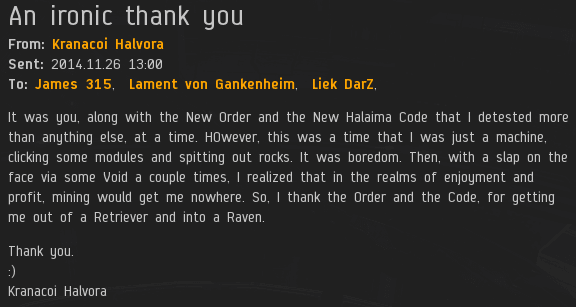 In the end, no carebear is beyond our ability to save. Some take a few more beatings than others, but they all get it eventually. The New Order is their Order, too.
Posted by MinerBumping at 19:46