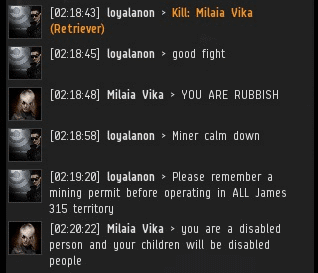 Uh oh, that can only mean one thing... It's time for yet another edition of the Highsec Miner Grab Bag!

A lot of people spend a lot of time talking about the treatment of "new players", but what about new Agents, such as Agent Reginald Poppycock? If people block them, they're less likely to be socially engaged, and possibly CCP loses money.

Fortunately, no one really blocks you in EVE.

Carebears frequently misspell the same words in the same way. For instance, what Daaga Ronin meant to say was, "Your Saviour is da man."

Notorious comment troll Veers Belvar is too sophisticated to call the New Order a bunch of Nazis. Carefully tiptoeing around Mr. H, Veers compared us to other historical "content creators". This may be our first Jack the Ripper comparison. In fairness, it was carebear Dream Five who wrote in the bio of one of her alts that we should stop ganking and start murdering strippers in real life.

...and she continues to haunt the CAOD subforum.

In all seriousness, I hope Dream Five doesn't quit. She still owes us a bunch of money for mining permits. 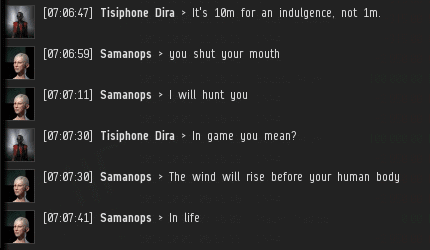 Being a GM must be so difficult in this game. Did Samanops make a real-life threat or a weather forecast? 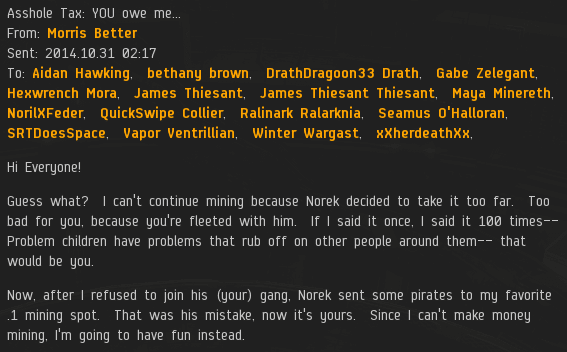 A bit of explanation may be required here. A miner named Morris Better lost his ship. Instead of accepting responsibility for the loss, he put the blame on a fellow named Norek Crendraven--and everyone who was in Norek's mining fleet at the time. Morris then began writing an EVEmail to send to all the miners. 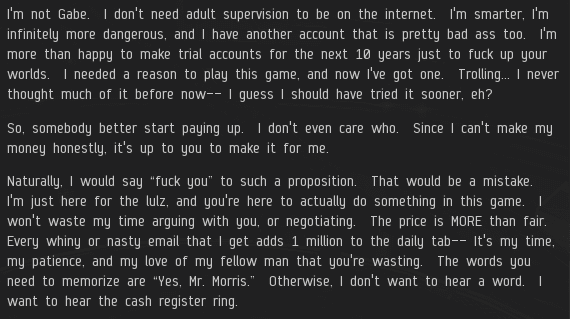 ...and over the course of writing said EVEmail, Morris had a bit of a breakdown.

Paradoxically, the guy who "can't play his game" due to having his mining ship ganked, is now supposed to be powerful enough to intimidate everyone.

So far, Morris has received 0 isk. Smart miners know they only need to pay 10 million isk per year, and to the proper authorities.

The catastrophically successful freighter-ganking campaign of October 2014 has opened a lot of people's eyes. In time, the light of the Code will shine so bright, people won't be able to ignore it even with their eyes closed.
Posted by MinerBumping at 19:25