Q. Which EVE organization helps more new players than any other?

A. The New Order of Highsec, of course. More than EVE University, Red vs Blue, or even GoonSwarm Federation! 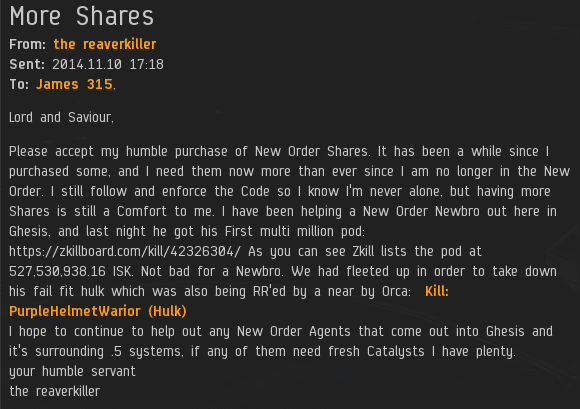 the reaverkiller helped a newbie slaughter a nice fat pod. Jazzed up by his good deed, the reaverkiller did another, buying 315 additional shares. This sent us over the 480 billion mark and earned him a Supreme Protector's Tip of the Hat™.

BONUS! Looking for evidence of our Agents doing elite PvP against ships that shoot back? Look no further than The Code is Forever #10. Kalorned did solo PvP against an Orca and a Hulk. The mouthy Orca pilot sent some serious combat drones against him, so it was a real fight.

The Orca and the Hulk both lost to the might of the Code. GF's all around.
Posted by MinerBumping at 19:11