This Is EVE: Nullsec Fleet Battles

Have you seen the latest EVE "trailer"? EVE players are singing its praises. It's gotten over 1.2 million hits on YouTube in just a few days. 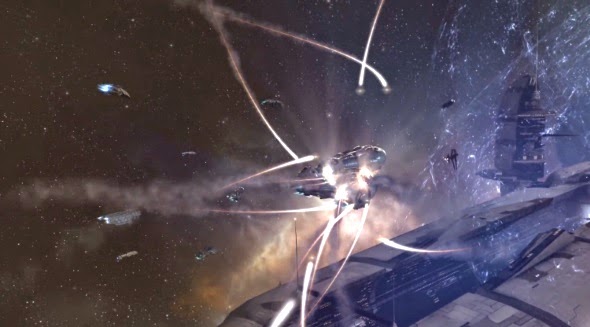 This is EVE (Uncensored)

This is a very nice little advertisement. ("Trailer" probably isn't the right word for something that shows off an 11 year-old game.) The ad uses a simple, effective concept: Ships in space as usual, but with real players' recorded voice comms for the audio. You get a taste of the multiplayer experience by hearing the players--and the emotion in their voices--as they played.

For obvious reasons, actual gameplay isn't used for the visuals. Tidi and spreadsheets don't sell a game. The battles are reenacted with tight, zoomed-in shots showing off the spaceships. The audio, however, is authentic, for the most part. The video begins with the caption, "All voices recorded by EVE Online players during actual gameplay". This is sort of true. Most of the audio is taken from TeamSpeak recordings captured during fleet battles. Some of it is staged, such as when you get a recording of a guy in station who's talking about how much powergrid is available for his ship fitting. The caption is technically true since the guy was "playing" the game at the time.

A lot of people are saying this is the best advert CCP has ever done for EVE, and I'm inclined to agree. What I find interesting about the ad, and the reason I'm writing a post about it, is that the video tells us what CCP thinks EVE is, or what CCP wants potential players to think EVE is. The title of the video says as much: "This is EVE."

So what is EVE? Basically, EVE is nullsec fleet battles.

One of the reasons EVE has such a notorious learning cliff is that the game is very broad. There are a lot of different things you can do in the sandbox. Even if you've been an EVE player for many years, there are likely aspects of the game you've never even dabbled in. We don't get a sense of this diversity from the advertisement. Instead, we see shot after shot after shot of nullsec fleet battles, with the occasional fleet battle in wormhole space. It's all PvP in zero-security space.

A couple caveats. For what I suppose you might say are political reasons, CCP declined to show off the so-called "griefer" side of EVE. They're not going to show players suicide ganking a freighter, or a guy freaking out after being awoxed, or someone perpetrating a scam. Needless to say, the New Order is not featured in this video. It's a shame, but an ad won't include activities that CCP employees themselves are not allowed to participate in. I don't agree with it, but I understand it.

Every other aspect of EVE, however, is fair game. So what don't they show off in the video? Anything that carebears do.

There's a minimal, token effort to show a few things other than nullsec fleet battles. For a few seconds, a guy talks about doing some manufacturing. Someone else hauls expensive cargo. But even there, he's talking about being chased by pirates, and he's in a wormhole. A miner is shown, briefly. He's not in highsec like 99% of the miner population; he's explicitly identified as a nullsec miner. (Amusingly, the video still manages to inject the miner with the self-pitying attitude we're so accustomed to seeing from the highsec variety.)

The highsec carebears are always telling us that their professions are legitimate and important. They tell us EVE isn't entirely a PvP game, that it's a PvE sandbox for those who want to play the game that way. The carebears lecture us that the vast majority of the EVE populace is in highsec, and that without miners there would be no ships. If CCP agreed with this, why is the carebear population absent from the video?

It's very revealing what CCP chose not to show. They could have shown carebears running a Level 4 mission together. They could've shown off a highsec incursion "fleet". Highsec could have been represented by a highsec mining corp sitting around a block of ice, or some people grinding Planetary Interaction, or shooting belt rats, or whatever. They could've hauled stuff around in the highsec trade hubs.

You might say, "But James 315, the point of the ad was to highlight nullsec PvP, not to show everything in EVE." I would completely agree, if not for the token efforts that were made to show other aspects of the game. Clearly, this ad was meant to show not a part of EVE, but to put the game as a whole on display. As the title says, "This is EVE."

The video shows a vision of EVE, and that vision does not include the PvE crowd. Carebears are not a part of the EVE being advertised here. The teeming masses of highsec are pushed aside. The kinds of players being targeted by this ad are people who want to engage in PvP with a bunch of other PvP'ers, in nullsec.

So does CCP's advertisement suggest to the carebears, "You're not EVE"? Does the video tacitly admit that the PvE, carebear, highsec, single-player, isk-grinding style of "gameplay" isn't really desirable or legitimate? I invite the reader to draw his own conclusions.