The burden of a New Order Agent is a heavy one. On their shoulders they carry the weight of having absolute authority over the games of hundreds of thousands of highsec carebears. Lesser men and women would join our ranks to enjoy the power and prestige. Our Agents are better than that, and everyone knows it. Our Agents have the undying respect of countless carebears. By the end of today's post, you will understand why. Without further ado, notable kills from November 2nd @ 00:00 EVEtime through November 8th @ 23:59 EVEtime: 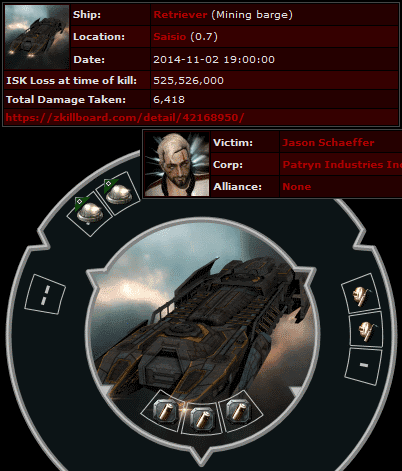 Jason Schaeffer was caught illegally mining with a Retriever worth over half a billion isk. The expensive mining barge's fittings are baffling--until you realize Jason was an unrepentant bot-aspirant. He didn't think ship fittings mattered in highsec. Agent ZannaZ Azizora taught him otherwise. 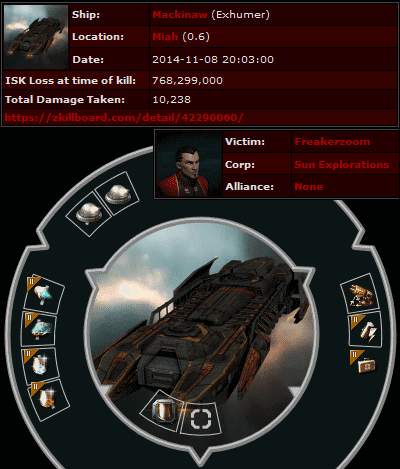 Freakerzoom had a funny little name. He was the asteroid belt's class clown, you might say. Our Agents enjoy a good joke as much as the next guy. But the Code is no laughing matter--unlike the 768 million isk Mackinaw's fail-fit. Agents Gohman Patrouette and Gallie Crendraven laughed at Freakerzoom's name and ship, then seriously performed their duties as enforcers of the Code. 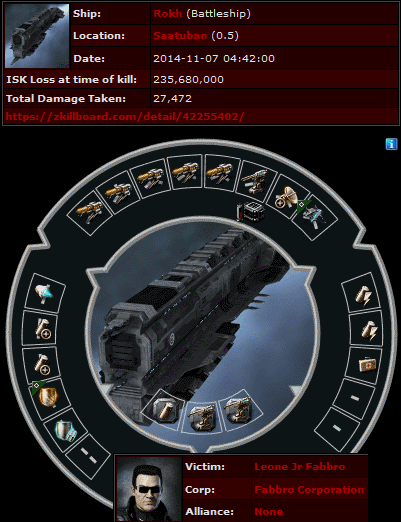 Fail-fit mining ships and permit-less carebears are walking tragedies. Nevertheless, we understand the root causes of those things, so they feel less tragic to us. Leone Jr Fabbro's stomach-turning miner Rokh, on the other hand... Agents loyalanon, Quaker Oatmeal, Gohman Patrouette, Misty Stenier-Tian, Gallie Crendraven, and holdmybeer took one look at this abomination and proclaimed, "Not in our highsec!" 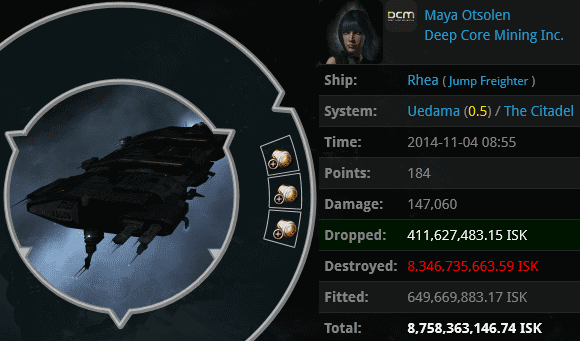 Maya Otsolen was a woman in a hurry. She equipped her jump freighter with a set of new modules that enhance a ship's warp drive. Why would she do this? Maya was on the run. She had a 10 million isk debt to the New Order and no intention of paying it. Our Agents have other ways of collecting, though. Sophia Soprano, Dias Rajashi, Dios Rajash, Bypbyp, CODE Agent AC, LarcatOfZion, Daishi Saria, Diasho Shorin, reaper Shardani, Sasha Cohenberg, BeBopAReBop RhubarbPie, Braggs Seyllin, Dios Rojosh, karma balancer, Diaz Serine, loyalanon, Dashio Sariana, Misty Stenier-Tian, Quaker Oatmeal, holdmybeer, Vexxatious, and Ahab of Pequod blew up Maya's 8.7 billion isk ship and helped themselves to the loot. 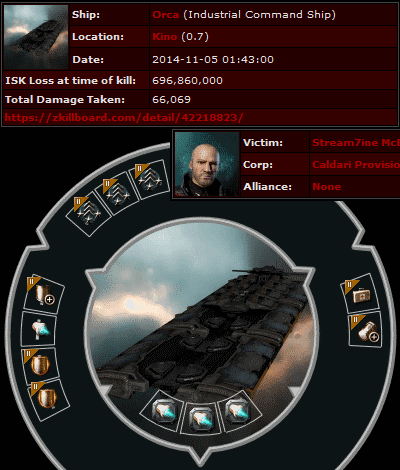 Stream7ine McBeth lost his Orca to Agent loyalanon. The fact that loyalanon killed the Orca is not very surprising, since the CODE always wins. 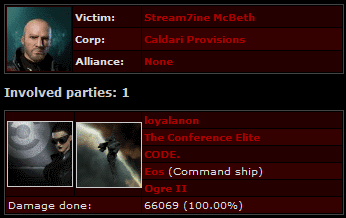 The question is, how did this kill come about? I'll let Stream7ine give you a hint: 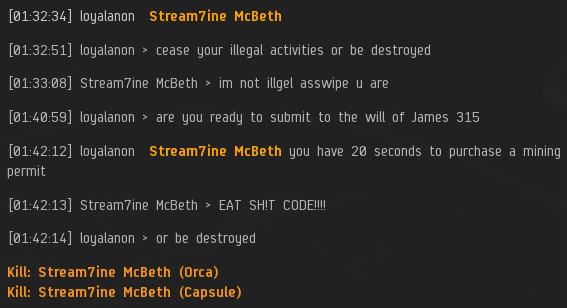 Faster than you can say "miner calm down", the offender was destroyed, along with his half-billion isk pod. The good news is, miners don't need to be ready to submit to the will of James 315. They only need to enter highsec. From that point forward, they're obligated to follow the Code. 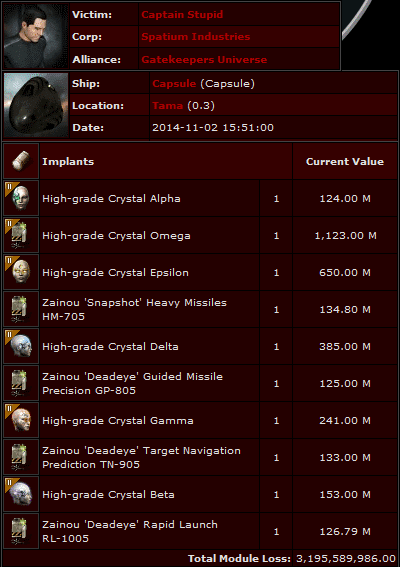 Captain Stupid was plodding along in his 3.2 billion isk pod when he was smartbombed by Agent Piir8, who was guarding a lowsec system. How did Captain Stupid react? You might be surprised. See for yourself: 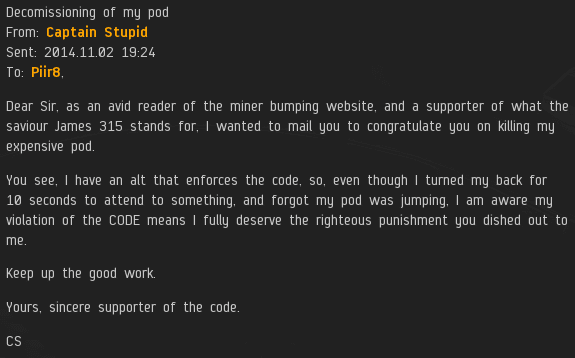 And that, friends, is why Agents of the New Order have won the respect of countless thousands of EVE players. Gallantry, nobility, integrity. You'll never find a bad Agent.
Posted by MinerBumping at 22:40