Over Half a Trillion in Shares Sold

Many have threatened to put a stop to the New Order. All have failed. The New Order and its brave Knights have only grown more powerful each day. Why? Because the bot-aspirants don't really care about anything; they can't. They can--and do--shed tears, selfish tears. But the New Order and all its supporters wield the power of unselfish devotion to the Code. That makes them unstoppable.

Permabanned Heroes of the Code gained another 1,000 shares from a purchase by Leia Jadesol, who wanted to give her friend DJentropy Ovaert his due. With this purchase, we exceeded the 486 billion isk mark, and the Permabanned earned another Supreme Protector's Tip of the Hat™.

The Conference Elite also gained an additional 1,000 shares by way of Leia Jadesol. This sent us over the 487 billion isk mark and earned TCE another Supreme Protector's Tip of the Hat™.

...and then it happened. 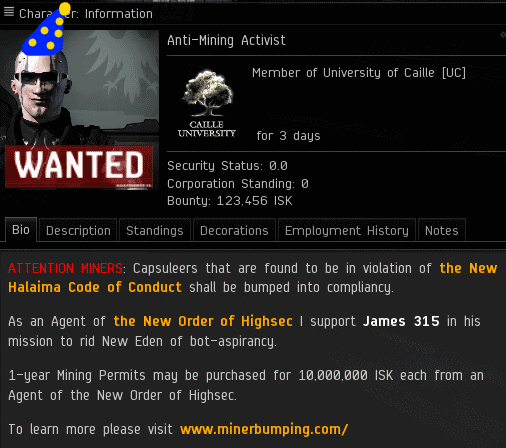 I don't know much about Anti-Mining Activist, but I do know that he likes to party. Look at that party hat--you don't see those very often, even in the perpetually victorious New Order. What's he celebrating? I'll give you 500 billion guesses.

KABOOM! At long last, the New Order has sold over half a trillion isk in shares. Everyone involved should pat themselves on the back. The New Order has done something truly special, something unprecedented in EVE: We have united players from all across the galaxy, men and women of all different professions. At half a trillion isk, our ganker reimbursement fund has accumulated ten times that which was paid by Hulkageddon Infinity. Once, the carebears predicted our downfall. Now they can only tremble.

The bot-aspirant can't see beyond the asteroid he's mining. The New Order dares to dream. What shall we dare to imagine next... a trillion isk in shares?
Posted by MinerBumping at 20:02