Every day is better with the New Order, isn't it?

Among the whiniest carebears, if you really want to earn street cred, you copy a GM on your "I'm quitting EVE" mail.

Sometimes people ask what happens if a rebel miner puts an insincere pledge of support to the New Order in their bio, without paying 10 million isk for a permit. Lhama Self provides the answer: They get ganked.

Carebears and Agents have very different perspectives on this game. Dyson Moriarty, for example, thinks autopilot exists "so it can be used free of consequences". That doesn't sound like EVE to me.

Don't expect the New Order to change its name any time soon. It's difficult enough for casual players to keep everything straight as it is: "New Order", "MinerBumping", "CODE.", "the Code", etc.

I don't know if CODE. corps are set up with the in-game corp-finder tool, but if they are, they'd be marked as "new player friendly".

Agents don't need to be exalted in their own eyes. They're exalted in my eyes, and that should be good enough for anyone.

Did you know the New Order of Highsec has a renter empire in the Drone Regions? Neither did I.

Some miners stand on ceremony more than others. The New Order is pretty casual. Only one rule: Don't be a Goofus. Huger Nalelmir broke that rule.

Although the miners of highsec are virtually identical, they do sometimes find ways of carving out a unique identity. 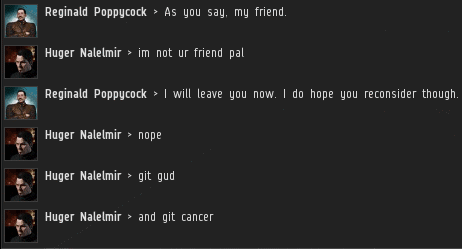 Between the New Order and the rebel carebears, which side consists of the "good guys"? Here's a hint: The miners are the ones always rooting for people to get cancer. As for me, I've always been firmly in the anti-cancer camp. The reason is simple. When EVE players die of cancer, the game loses subscribers. That means less revenue for CCP. 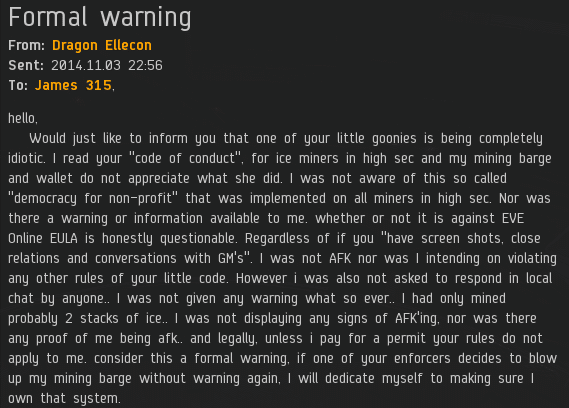 It's one thing for a miner to issue an empty threat. They do that all the time. Dragon Ellecon, on the other hand, gave me a "formal warning". Much more serious.

I only have one question for Mr. Dragon. What's wrong with our Agents' Catalysts? 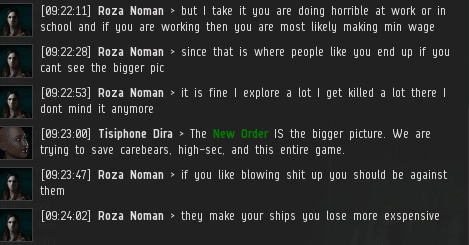 Roza Noman thinks gankers work for minimum wage because they can't see the bigger picture. Also, people who blow up ships should be against people blowing up ships, because it makes ships more expensive. Navigating so smoothly from one non sequitur to another is quite a feat. It takes more than WASD controls to pull that off; you need carebear logic. 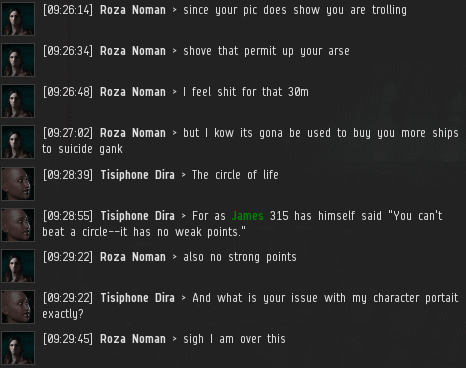 Roza Noman continued throwing out carebear logic until she had none left to give. "I'm not paying 30 million for a permit because your character portrait shows you're trolling." Those are the kinds of insights you can only discover in highsec.
Posted by MinerBumping at 21:11