Previously, on MinerBumping... Highsec miners Ryuu Rockefeller and shaneduce were horrified to learn that CODEdot was renewing its wardec against their corp. Instead of turning to the Code, they sought salvation in the Anti-Ganking channel.


Roysefus > wow lol its true though. Code says play our way or else... no the anti gankers do too?
Agent Tom > no but u do not troll in here and u my god sir is a code troll
Roysefus > lol nope
Agent Tom > then why troll
Ryuu Rockefeller > Agent Tom sir you will have code alts in here carefull
Suriv Virus > u act like 1 now Roysefus

No matter how many times Ryuu tried to redirect the conversation toward the wardec, he was thwarted. The Anti-Gankers' infighting continually derailed everything.

The atmosphere was as tense and toxic as ever. The primary topic: Who was and was not a New Order spy. A stray remark was enough to put anyone under suspicion.


Agent Tom > so u guys think its ok to start picking on those ho like to fighet code and is asking fore help that is trolling in my bok
Roysefus > I never said anything in favor of code. Im just tired of all the or elses going on everywhere
Aidan Hawking > I'm no supporter of CODE, but Roy has a point. All this 'do this or else' BS is fucking annoying.
Agent Tom > the leaver
Kalynn Shardani > only person trolling is Aidan Hawking - he is Norek Crendraven alt https://zkillboard.com/character/90684218/
Agent Tom > yes we know
Ryuu Rockefeller > so this channel must be cleaned from code alts

After a potential New Order spy was identified, Ryuu and shaneduce made another effort to request help:

They were preaching to the choir. Complaints of bullying and extortion are the wallpaper of the Anti-Ganking channel. Now that everyone was on the same page, could their corp receive assistance in the wardec?

...Apparently not. Each time someone new entered the fray, the channel reverted back to spy-hunting mode. The Anti-Ganking community erupted into a new series of accusations. 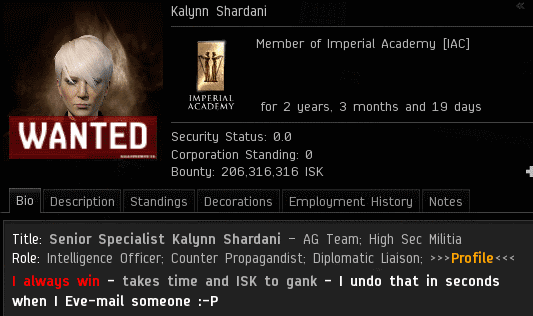 Recently, Kalynn promoted herself from mining consultant to "Senior Specialist". She claims to be able to undo the New Order's trillions of isk worth of ganks simply by sending useful information to gank victims. Her EVEmails basically tell miners to fit tanks and not go AFK--in other words, to obey the Code.

According to the latest rebel blog, "Highsec Militia", Kalynn is a pretty big deal. 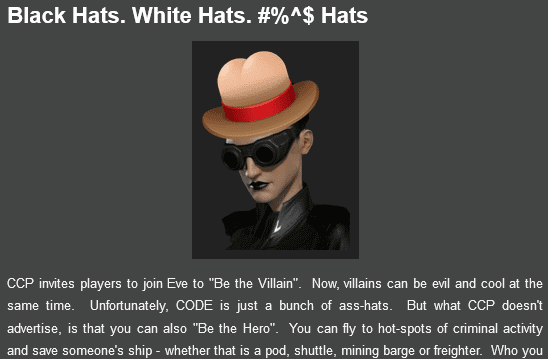 Don't worry if you've never heard of the Highsec Militia. There's plenty of time to get caught up with their tear-filled posts.

Before Kalynn and Ryuu could engage in a productive talk, Anti-Ganking was once again swept up into a discussion of security issues.

Highsec carebears are known to be prickly and entitled. The slightest inconvenience sends them over the edge. Imagine an entire channel filled with that sort of person, and you'll begin to understand Anti-Ganking. A fight broke out between Vector Symian and the two miners. Someone slighted someone else, or something.

Vector suggested shandeduce's profanity-laden bio wasn't enough to stop the New Order. He recommended using combat ships. This was enough to cause another argument:

Feelings were hurt. It was simply impossible to put together a coherent anti-Order strategy. To make matters worse, Senior Specialist Kalynn went AFK--they lost their heavy-hitter.

With that, Vector left the channel. Ryuu and shaneduce also left the channel in a huff. They concluded that the Anti-Ganking community wouldn't protect them from the Agents of the New Order. They were right. When our Agents set their minds to accomplishing something, nothing can stop them--certainly not a bunch of irate carebears. The good news is, the bot-aspirants don't need to be protected from our Agents; they need to be protected from themselves. If they give up their bot-aspirancy and embrace the Code, all will be well.

Now that's something they won't tell you in the Anti-Ganking channel.
Posted by MinerBumping at 21:15