The Passion of the Bacon

Earlier this week, the CSM minutes disclosed CCP's plan to remove all awoxing/safaris from highsec. I wrote a blog post about the change and included relevant exchanges between CSM members and CCP employees. As you can see from the minutes, the person most opposed to the nerf was DJ FunkyBacon, the CSM member I endorsed for CSM9. 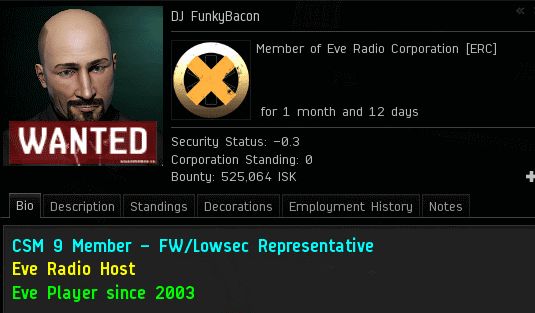 FunkyBacon has been playing EVE for more than a decade and has been a well-known DJ for Eve Radio since 2006. His show on Eve Radio runs on the Friday evening/Saturday morning timeslot. As you might imagine, he had a lot to say this week when he took to the airwaves. The EVE community is abuzz about FunkyBacon's impassioned--sometimes very loud--rant about the removal of awoxing/safaris.

In an impromptu "Mr. Smith Goes to Washington" moment, FunkyBacon spoke for a half-hour about the state of EVE and the direction CCP has been taking the game. As a CSM member, FunkyBacon has a level of access to CCP that the rest of us do not, so it's worth paying attention. You'll find that his observations closely mirror the things I have been saying for a few years now.

To listen to a recorded stream of FunkyBacon's show, you can go to the Eve-Radio Rewind page and scroll down to the FunkyBacon show marked Saturday 00:00 1st of November 2014. Or you may load the stream by inputting the http://rewind.gamingradio.net/playlist/ERP_FunkyBacon_2014-10-31-2359.m3u referral into a media player such as VLC.

FunkyBacon's co-hosts kicked off the show; the man himself doesn't appear until roughly the 17-minute mark, which is when the discussion of awoxing begins. (As this is a stream, you may not be able to jump or fast forward directly to that point in the recording. As an alternative, you can increase the playback speed and slow it back down when you reach 17 minutes.)

It's always a pleasure to hear from people who care more about the quality of the game than the amount of money CCP is making from it.

UPDATE: FunkyBacon wrote his thoughts on this subject on his blog. It's worth a read.
Posted by MinerBumping at 19:22