A minute later, Starfox's alt was enrolled in the academy. It consisted of a chat between himself and TDD Dominaters. Clearly, TDD spared no expense. But Starfox was apprehensive. Now that he was in an "academy" chat instead of a regular corp interview, what kinds of questions would he need to answer?

TDD was curious what country Bismarck was from. Within 40 seconds, he got Bismarck's answer, forgot it, and asked him again. Welcome to the academy.

For the rest of the academy chat, TDD asked Bismarck questions about his timezone. Reading the transcript of TDD interviewing a new recruit is kind of weird. TDD conducts an interview like an alien trying to pass himself off as a human.

Bismarck's training session came to a close. TDD then announced that the chat wasn't the real academy. That would come later. First, Bismarck would need to read an EVEmail about it. 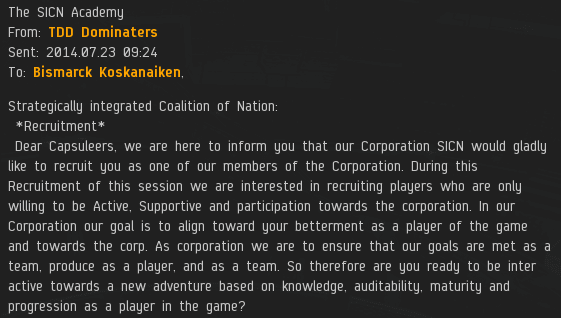 At the time, TDD's corp was called Strategically Integrated Coalition of Nations. As the "academy" EVEmail explained, the corp was focused on achieving its goals. The first goal, it seems, was to throw as many buzzwords as possible into a blender and make an EVEmail out of it. Success!

I actually find myself in agreement with TDD on one point: Everyone needs to be on the same path, or there will be chaos. That path is the Code. 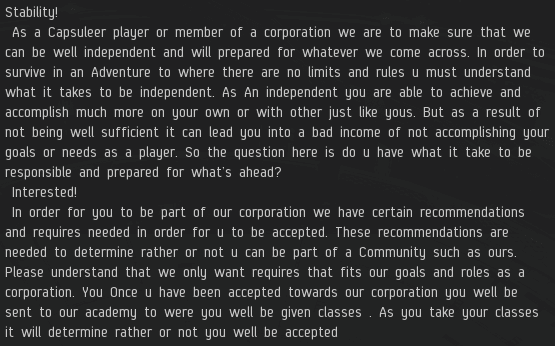 As we have seen, the academy is actually a multi-layered process. First there was the interview with TDD. Once in the academy, TDD invited Bismarck to a second interview. Then came the EVEmail. In this section, TDD explains that once you're accepted, you'll take classes. Those classes will determine whether or not you'll be accepted. Maybe the academy is like a provisional membership, or maybe it's some sort of Schrödinger's Carebear situation. I wonder if TDD's own alts could make it through all this nonsense.

As always, there are some requirements for joining the corp. Not everyone is worthy of the privilege of mining in highsec with TDD's crew. I think it's supposed to say "language" instead of "languish".

On the other hand, maybe TDD has it right.

Buried at the very bottom of the EVEmail, we get the fine print: You need to play EVE for 4 hours a day, minimum. The good news is that you only need to meet the 4-hour minimum at least 3 days a week. Why do you need to spend so much time mining and running missions in highsec? Because TDD needs his corp members to make him a bunch of money in taxes. According to conventional wisdom, corps like these need to be protected from awoxers so they can scoop up as many new players as possible. Serving time in TDD's corp makes you more likely to want to play EVE long-term, they say.

Call me old-fashioned. Call me a bittervet. But I think corps like TDD's should be awoxed, wardecced, and destroyed by any available means.

TDD's Strategically Integrated Coalition of Nations corp was, naturally, wardecced into oblivion. TDD was forced to repeatedly create and fold a series of new corporations. He hasn't given up. Tactical Stability Union is the latest corp to "service" new players.

You might object that our Agent, Capt Starfox, wasn't a genuine newbie; he was only posing as one. How does TDD's corp look through the eyes of an actual new player, one who doesn't know about the New Order or TDD's history? From time to time, New Order Intelligence provides me with players' APIs, allowing me to read their EVEmails. One of those players happened to be a member of TDD Dominaters' Tactical Stability Union. In our next installment, I will provide you with access to something special: The TDD experience from the perspective of an innocent newbie.