Gamers can be demanding. In other games, players urge the developers to improve graphics, fix netcode, add features, release expansions with new content, etc. In EVE, it's a little different. We're mainly interested in improving new player retention, so EVE can get more subscribers and CCP can make more money. With this noble goal in mind, players carefully considered how to improve player retention. The consensus is that we need to make it easier for new players to join good, high-quality PvE corps in highsec. This is a challenge, because there's no such thing as a good, high-quality PvE corp in highsec. 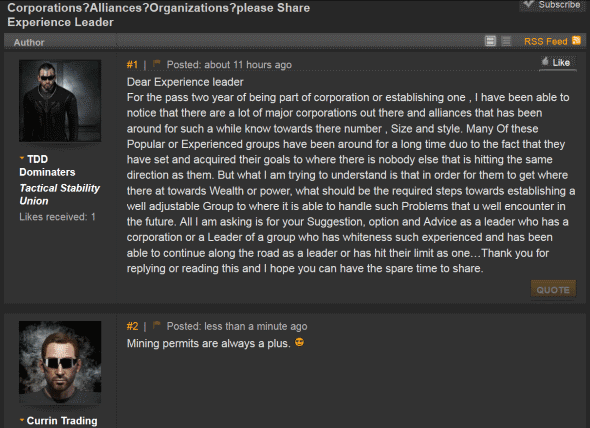 That doesn't stop the CEOs from trying hard to create one. Take TDD Dominaters, for instance. He's a highsec carebear who went to the defunct CAOD subforum on EVE-O to get some advice on how to improve his leadership skills. 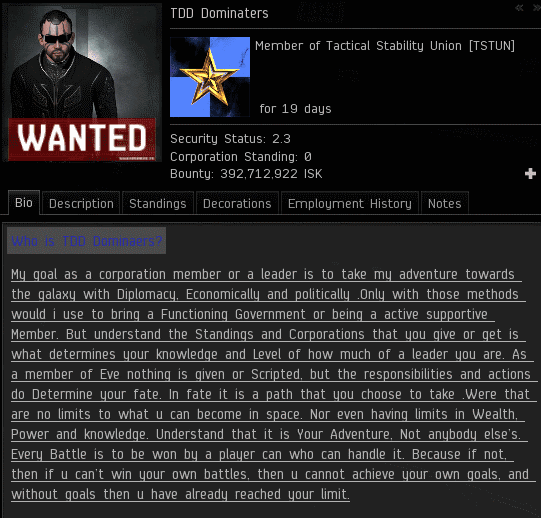 At first glance, the CEO of Tactical Stability Union is just what EVE needs to help new players get hooked on EVE. He is passionate and dedicated. 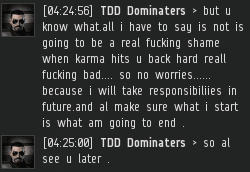 From his consistent abuse of new players, TDD Dominaters became the poster child for the necessity of awoxing. Enlightened EVE players know the truth: Bad corps need to be destroyed.

For further reading on TDD, see the following epic series...

Through the magic of awoxing and wardecs, the New Order has frequently thwarted TDD's plans to suck the life out of new players' EVE experience. But TDD isn't giving up, not yet. When he started yet another nightmare corp, it was time to launch an investigation. Agent Capt Starfox volunteered to go deep undercover as Bismarck Koskanaiken, a new player looking for a highsec corp to join.

Once awoxed, twice shy. TDD learned not to automatically accept all applicants to his corps. As a security measure, he interviewed all potential recruits. He didn't know what to ask, so he repeatedly asked the same questions and pretended to be thoughtful about it.

Bismarck expressed his interest in running missions, an activity TDD could tax. So far, so good. But to be extra careful, TDD wanted to get Bismarck on voice comms.

For some reason, TDD was especially interested in getting members with smartphones. Maybe he had an app for bot-mining.

There was no doubt about it, TDD hadn't changed. He was still a slave driver. He wanted to be able to call up his members at home and notify them of emergency mining ops or something.

Bismarck wasn't able to get on voice comms, so he flunked the corp's security screening. That didn't matter, because TDD was too anxious to get more new members for his corp. First, however, Bismarck would need to pass through TDD's testes. Wait, what?

...He probably meant "tests". You see, the corp had an "academy" for new recruits. Allow that to sink in for a moment--an EVE academy designed by TDD Dominaters.

It was enough to make anyone flee in terror, or disgust. But our Agent was ready to put everything on the line for his secret mission in the name of the Code. Now it was time for cadet Bismarck to enroll in TDD Dominaters' academy. It would challenge him in ways he never thought possible.