One day, none of us will be playing EVE. When that day comes, we won't have any ships, isk, or other in-game assets to play with. All we will have is our legacy.

Agent D400 is one of the most accomplished and well known warriors of highsec. He was among the victims of September 10th. Though D400 can't play EVE anymore, his legacy lives on after him.

A miner will dismiss the importance of the Code, yet the Code will be remembered long after a miner's ill-gotten ore has been sold. 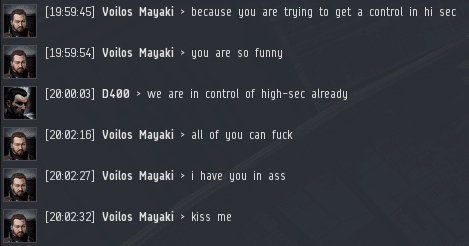 As we know from the Kills of the Week posts, a carebear's wealth can be incinerated in an instant. Expensive modules and no tank? You may as well pour gasoline on your wallet and light a match.

The carebear condemns our Agents for cowardice. They say it's too easy to kill the AFK and the unarmed. Yet even our "victims" will be telling others of the legend of the New Order long after they've forgotten their day-to-day grind of highsec PvE.

D400 challenged the establishment in two ways: He defied the bot-aspirant culture of highsec, and he undermined the "elites" who say all PvP should be confined to lowsec, nullsec, and wormhole space. 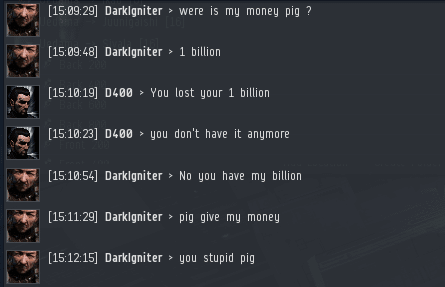 The courage and valour of an Agent is obvious, especially when set in contrast to the lowly carebears they gank.

Nearly everyone who plays EVE passes by the teeming masses of highsec carebears on their way to and from Jita. The carebear is quickly forgotten, if he is even noticed at all. But the highsec ganker who kills you along the route--you never forget him! 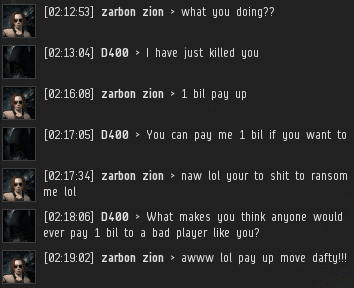 Carebears are pretty much all the same. They do their meaningless chores and unwittingly spout the Miner Bingo quotes we've already heard before. On the other hand, each Agent is a unique treasure, enforcing the Code with his own signature methods.

The carebear knows nothing, can teach nothing, and can learn only a little. What they do learn, they learn from us. 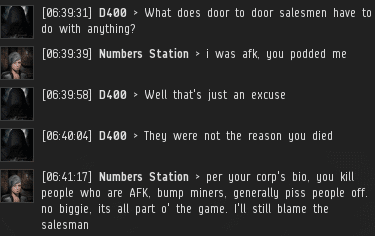 Every moment an Agent remains in the EVE galaxy, he breathes a bit more life into it. The life of emergent gameplay is the sole purpose for EVE's existence. EVE's value comes from emergent gameplay provided by content creators. Our legacy is the heart and soul of EVE itself; the rest is only spreadsheets. Each EVE player has a choice of legacies: They can add to the spirit of EVE through the New Order, or they can pile a few more numbers into their wallet before the spreadsheets go blank.
Posted by MinerBumping at 20:03