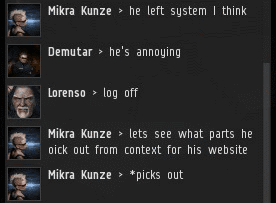 Miner logic: Real-life death threats and profanity-laden rants only make you look ridiculous if they're taken out of context. Time for another edition of the Highsec Miner Grab Bag!

Never trust a carebear. Especially if he tells you, "This is not over." Once they lose their mining barge, it's pretty much over.

zinlistic shineon was enraged when he lost his Bestower. He purchased pointless bounties at an alarming rate. Then started funding them with PLEX. If this continued, zinlistic might use up his kids' college fund. Agent Tisiphone Dira immediately commanded the miner to calm down.

At least zinlistic admitted that he wasn't ready to calm down. Still, he had a lot to learn about the purpose of highsec. It's not there to be a safe zone; it's there to be a Code zone.

Agent Zane Arnolles gave the Russian carebear the benefit of the doubt by assuming his EVEmail was polite. But this is unlikely when the EVEmail includes "1945". Google translates the message as follows:


"You bastard like the rest of your geyropa. You had with your Fuhrer in 1945 to finish all of you. Right now would be the world's problems would be less."

A rough translation, but you get the idea.

As I've said before, a bad spouse is one who brings out the worst in you. For example, saenindica's wife engaged in illegal activity and encouraged her husband to do likewise. Protip: If anyone other than James 315 is your "big boss", you're playing EVE wrong.

The same goes for boyfriends and girlfriends. Find one that shares your Code-compliant values. Otherwise they'll drag you down and you could risk losing valuable ships and cargo. 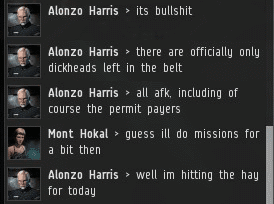 Little by little, highsec is being cleansed by the New Order. That doesn't mean the New Order will be popular with everyone. Believe it or not, some people want highsec to be filthy.

Zane Arnolles received another garbled message. I think this one comes from a miner who hopes Zane becomes disabled in real life (in-game).

Millagro Miracless' righteous indignation was blunted by the fact that she didn't even have a bio at the time. Luckily, a few days later, she did purchase one. But notice that second EVEmail: Her fiancé distracted her and she went AFK. I have real concerns about that marriage. I don't know if they're a good fit. Just my honest opinion.

Some carebears, like the one seen here, believe they're entitled to safety because they have only a little time to play the game. Actually, it's just the opposite. If you're going to play EVE for only a short time, play the game to its fullest.

Dr. Dice's goal was to forget about explosions--in a game about exploding spaceships. His secondary goal was to use local as a forum to make real-life threats. EVE is a sandbox. Like all sandboxes, EVE has its limits. Some ways of playing the game are simply wrong. And most of them involve mining.
Posted by MinerBumping at 18:59