Previously, on MinerBumping... Agent Kalorned and Agent Svara Eir killed Steroid Gontarsky, who was flying a Mackinaw in the DMZ of the Gamis borderlands. After unleashing a torrent of profanity, he suddenly pulled a 180 and began begging for reimbursement.

Of Steroid's many excuses, the strangest was his claim that he was already renting a lowsec station from the New Order.

Though his lie about being a "new player" had already been disproven, Steroid continued to plead ignorance.

Each time Kalorned tried to help Steroid, the miner asked, "how?" Clearly, this was a carebear who felt entitled to hand-holding.

Kalorned was mystified. The miner was unwilling to think or learn for himself. That didn't sound like a true EVE player; it sounded like a bot who needed someone else to program him.

As time went on, Kalorned grew to suspect Steroid of being a bot-aspirant.

Since the creation of the New Order, Agents have observed bot-aspirants to have something like default factory settings. The result is a bunch of Miner Bingo quotes and other clichés.

The miner began spitting out new excuses in rapid-fire succession. But the law is clear: If a miner is caught running from an Agent, he should expect to be shot. Otherwise miners would have too easy a time getting away. 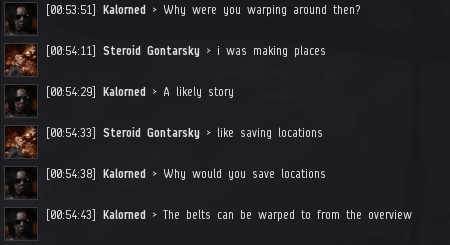 Incredibly, Steroid claimed he hadn't been running away at all; he was warping from belt to belt, unaware of being pursued. He just happened to be bookmarking the asteroid belts at the time. It was all a big coincidence.

Then Steroid flipped everything around. He asked Kalorned why he didn't gank Agent Svara Eir, who had assisted on the kill.

The miner became fixated on Svara. Previously, he'd spent his time directing racial slurs at Svara. Now he hoped to convince Kalorned to kill her. Unfortunately for Steroid, carebears are never successful when they try to tell Agents of the New Order what to do. And for good reason: Agents are at the top of the hierarchy, while miners occupy the lowest level.

Steroid initiated a convo with Svara, who wasn't interested in speaking with him. The miner began exhibiting even more peculiar behavior than before. He was increasingly unstable. Was Steroid Gontarsky a lost cause? Kalorned remained determined. He truly believed that the miner could be saved. Was there any hope of convincing the miner to change his ways--to persuade him that the Code is good for EVE, and that he was lucky to have been ganked?

Next time: The shocking conclusion!
Posted by MinerBumping at 19:09