Previously, on MinerBumping... The Sky Gods Fortune held hostage! CEO Scoot Sollete poured his money into the components for a "war-POS" and contracted them to trusted adviser and freighter pilot TheInternet TweepsOnline TheInternet. Then, in an unexpected twist, TheInternet reported that his freighter was being bumped by Siegfried Cohenberg, an Agent of the New Order with a lethal reputation. 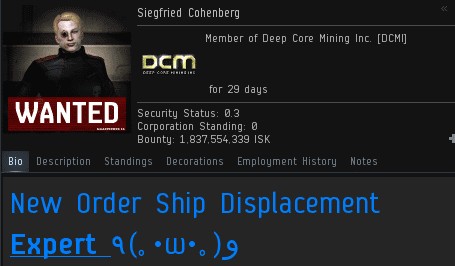 Scoot, TheInternet, and Siegfried shared a TeamSpeak channel to negotiate the terms of the freighter's release. At the same time, Scoot and TheInternet had a private discussion in their corp channel.

The corp's fate rested entirely in Siegfried's hands. TheInternet recommended that Scoot pay the ransom. There was no other choice. Scoot couldn't do it. He didn't have enough isk to meet the demand.

Carebears hate to part with their isk. As pirates know, a carebear will almost always claim they can't pay the ransom. It's a matter of instinct. But TheInternet was not a pirate holding Scoot's ship for ransom; he was a full director of Scoot's corp. He reminded Scoot of the stakes.

For a third time, Scoot told TheInternet he didn't have the money. Everything he had, he'd put into the war-POS components that were currently sitting in TheInternet's freighter. There was no way to pay the ransom.

As Scoot considered his options, he felt a growing hatred toward Agent Siegfried.

At long last, Scoot found the money. It turned out he'd been secretly holding back a PLEX. With no other choice, he sold the PLEX and transferred the cash to TheInternet so the ransom could be paid. It was the honest thing to do, but it was certainly late in coming. Scoot did not show total faith.

Deprived of his isk security blanket, the carebear's raw emotions shone through. He railed against the Goons. Scoot believed the Goon who held TheInternet's freighter hostage was too cowardly to live in nullsec. He made no judgments about his own choice to run a highsec-only industrial corp.

All of Scoot's true feelings came spilling out. Though he accused others of cowardice, he craved total safety for highsec. He wanted to completely eliminate ganking and wardecs from the game. Scoot's mind was a mess of contradictions: Siegfried was too cowardly to go to nullsec, but nullsec is safer than highsec. Ganking is too easy, but highsec PvE needs to be much easier. Carebear logic!

Phew! TheInternet was pleased to report that he'd been let go. An immense sigh of relief washed over the corp. However, TheInternet still needed to get his freighter safely back to the corp's HQ. He recommended additional money be paid to the New Order for blue standings.

Scoot didn't have any more money to pay to the New Order--for real this time. Unfortunately, this left TheInternet's freighter in limbo. In a stroke of tactical brilliance, the New Order was now camping the corp's HQ.

Once again, TheInternet recommended Scoot make an extra effort to find some isk. Leave no stone unturned, he urged. The very idea made Scoot sick.

As it became clear that Scoot wasn't going to pay anymore money, the tone of the conversation on TeamSpeak changed dramatically. TheInternet and Siegfried began chatting like two old friends. Scoot couldn't believe what he was hearing.

Believe it or not, TheInternet was, in fact, an Agent of the New Order the whole time. The truth is, he wasn't really interested in setting up an ore buyback program. His only desire was to enforce the Code.

The freighter, if TheInternet even owned one, was never held hostage. The entire series of events was staged as means of testing Scoot's leadership. He failed. In his capacity as an Agent of the New Order, it was up to TheInternet to decide whether Scoot deserved to be the CEO of a highsec industrial corp. In TheInternet's judgment, Scoot wasn't ready yet.

Thanks to his earlier corporate maneuverings, TheInternet gained the ability to have Scoot removed as CEO of the corp. In Scoot's place, he installed Kaalatas Nebunaesa, the security consultant he'd brought on board. Kaalatas turned out to be an Agent of the New Order, too. He promised to usher in an era of Code-compliance. 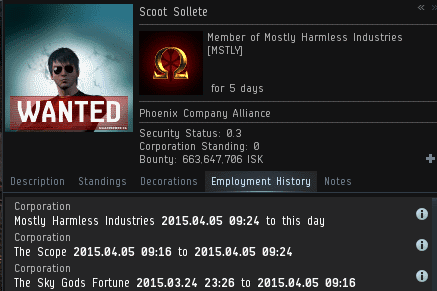 Scoot disagreed with the corp's new direction and resigned on the spot. The corporation he'd founded would no longer pose a threat to highsec. It was a tremendous victory for the New Order and its Code. The doubters said it couldn't be done. Let this be a lesson to all the carebears--never underestimate an Agent of the New Order.
Posted by MinerBumping at 19:15