TheInternet also happened to be an accomplished awoxer whose adventures were publicized on MinerBumping. He was a deep-cover Agent of the New Order. Like James Bond, TheInternet managed to go on secret missions despite a flashy lifestyle that usually involved loud explosions. Also like Bond, he didn't bother using an alias. He was that good.

But when he asked to be made a full director, his new CEO found something suspicious on his killboard. There was no use denying it. The record clearly showed that TheInternet and fellow awoxer Thomas Duncan had ganked their corp's Orca pilot and podded him for good measure.

Without missing a beat, TheInternet explained away the Orca awox. And he managed to do so while putting himself firmly in the anti-scammer camp.

Despite TheInternet's valiant attempt, Scoot wasn't buying it. He looked up the Orca pilot on EveWho.com and saw no evidence that he was a scammer. 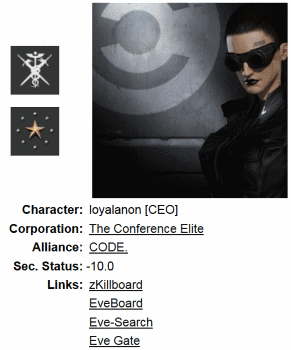 In addition to tracking the membership of corps and alliances, EveWho is useful for doing background checks on individual EVE players. The site allows users to leave comments about the players. For example, if you looked up Agent loyalanon, you would find comments like these: 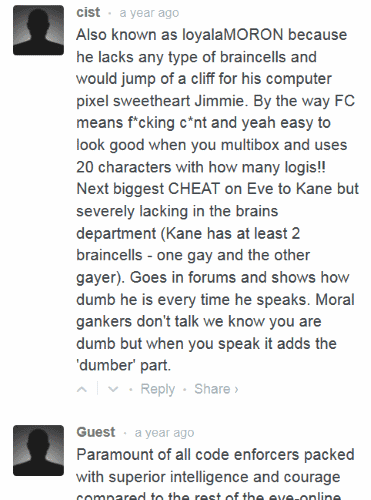 Random commenters often label scammers as such. Scoot saw nothing to suggest that the Orca pilot was a scammer.

Of course, not every scammer attracts condemnation in EveWho comments. But if Scoot took a few seconds to look up TheInternet TweepsOnline TheInternet, he would find this: 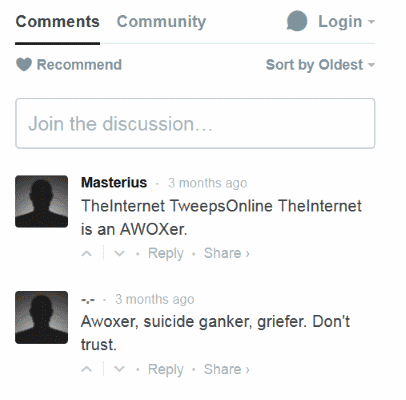 Our hero had no way of knowing whether his CEO was, at that very moment, discovering the truth about his ambitious new recruit. So TheInternet simply did what he was trained to do. He maintained his cover as best he could.

He'd looked up the Orca pilot, but it never occurred to Scoot to use EveWho to look up TheInternet himself. Fortune favors the Code.

The storm had passed. Scoot was willing to overlook that pesky little Orca incident. Highsec is built on trust.

TheInternet explained that he had absolutely no interest in emergent gameplay like corp thefts and the like. The two agreed to put aside their suspicions and work together for the good of their corporation.

Espionage can be a very nasty business. Sometimes, an operative is forced to do bad things to maintain their cover identity. To prove that he was just another bot-aspirant like the rest of the corp's members, TheInternet announced his intention to autopilot in a freighter.

Less than 80 minutes after joining the corp, TheInternet was promoted to full director status.