New players are a precious resource. Unfortunately, there are those who would prey upon the ignorance of new players. These predators seek only to exploit the new players and subject them to unnecessary grief. I am, of course, referring to the leaders of highsec PvE corporations.

The true "griefers" of EVE are the carebear CEOs. Their goal is to locate the most vulnerable players and convert them into isk-grinding machines. In almost every case, they describe their corporations, as seen here, "newbie-friendly with veteran leadership". The new players, being unfamiliar with the game, never think to question why a veteran player with real skill is leading a highsec PvE corp. Experienced players know better. A "veteran leader" has no business telling a bunch of newbies to mine and sell ore to them at less than Jita prices.

Each and every day, countless EVE players unsubscribe out of sheer boredom. It isn't the traditional kind of "griefing" that you hear about, but it's all too real. Theirs is a griefing of quiet desperation. The New Order to the rescue! Agent Kalorned ("Koland") saved the author of this EVEmail from a terrible fate--by ganking him.

The transformation. Once a player has been forcibly removed from their carebear corp, they are free to explore the enjoyable aspects of EVE.

It's important to note that the liberation of players from a carebear corp almost always requires some act of violence. EVE players typically stick with their corp--no matter how bad it is--out of loyalty. They must be given a sharp nudge, not unlike a baby bird that must be pushed out of its nest so it may be properly motivated to discover flight.

Rest assured, the "veteran leaders" eventually get what's coming to them--destruction at the hands of the New Order's finest.

Each time the carebears fail, they petition and beg CCP to remove PvP from highsec. They tell CCP that the company's profits depend on it. But CCP is slowly beginning to awaken to the truth: Ganking improves player retention, and carebearism reduces it. The carebear never cared about CCP; he cares only for his own money. 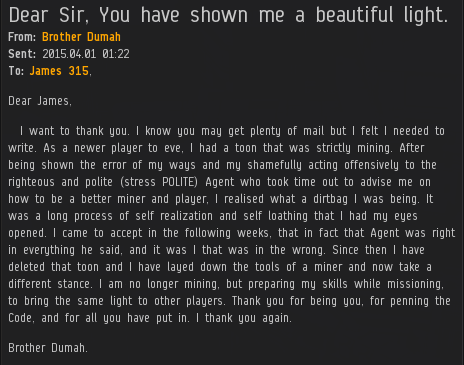 Highsec's time has come. If your corp's "leaders" have griefed you into mining or other bot-aspirant activities, don't hesitate to stand up and fight for your right to make your corp obey the Code!
Posted by MinerBumping at 00:15